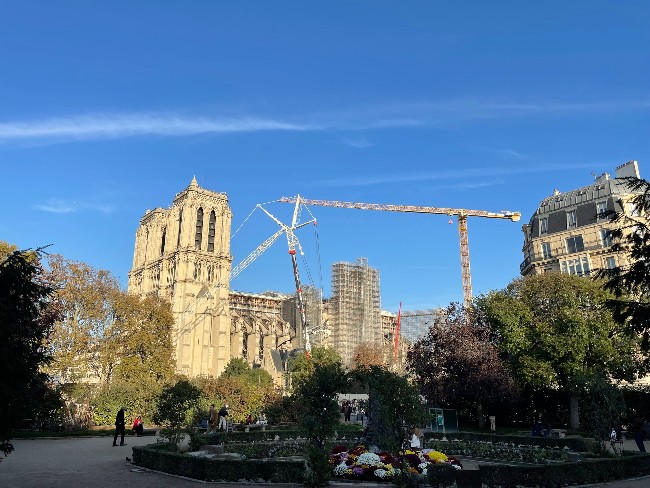 The unseasonably warm autumn weather continued to delight Parisians and tourists alike over the long weekend (November 11 is Armistice Day). Visitors flocked to the Seine to take selfies in front of Notre-Dame cathedral as a new crane has gone up to aid in the massive construction effort. The previous day, Thursday, November 10th, was marked by a transport strike, with the Paris metro at a standstill. French unions (including RATP, the Paris metro authority) protested for higher wages. As reported by RFI, “Unions representing the RATP’s nearly 70,000 employees say they are feeling the pinch of soaring prices, but are also overstretched because of insufficient hiring, resulting in increased sick leave.”

We’re counting down to the Paris 2024 Summer Olympics. News about the opening ceremony and the marathon route only adds fuel to the fire. The latest we’ve learned? The Olympic mascots have been revealed… and they’re hats. Phrygian caps, to be exact, in France’s national colors. Here’s what The New York Times says about La Phryge Olympique and la Phryge Paralympique, as they’ve been dubbed. “The Phrygian cap, a soft, generally red hat, dates to headgear worn by freed slaves in Phrygia, an ancient Greek kingdom in what is now Turkey. But they are most associated with the American, and especially French Revolutions, where they were worn as a symbol of freedom.” Check out the video below.

The Olympic Phryge and the Paralympic Phryge are taking the lead of a tribe which always has its trainers on 👟
What could be better than little Phrygian caps to lead the revolution through sport and accompany us to the #Paris2024 Games! pic.twitter.com/hUjFI09zZM

Paris food lovers know that the city isn’t just a bastion for traditional French cuisine. Chefs from all over the world flock to the City of Light to hone their craft and your options are endless. Looking for a great Japanese restaurant in the city? The Financial Times has published the “Nikkei correspondents’ guide to the best Japanese restaurants in Paris” with expert tips. These recommendations include Sushi Marché in the 16th; Michi and Tomo in the 2nd; Menkicchi in the 1st.

Seven years ago, on November 13, 2015, horrific terrorist attacks took place at the Stade de France in Saint-Denis, in several Parisian bars and in the Bataclan concert hall (11th), leaving 130 dead and 413 injured. The city has announced that a memorial garden will be created at Place Saint-Gervais, located in the very heart of the city, close to the Seine. Wagon Landscaping was selected to oversee the project, after the city’s call for tenders, and the agency is working closely with the victims’ associations to channel their wishes in the garden’s creation. Slated to open in 2025, the garden will pay homage to the victims of the terrorist attacks (with their names etched in memorial steles) while also serving as a place to gather and meditate, surrounded by rich vegetation in all seasons of the year to symbolize the “cycle of life.”

A 100 years ago on November 18th, 1922, author Marcel Proust died at the age of 51 in Paris. In his memory, a plaque was affixed on Monday at 45, rue de Courcelles (8th), where he lived with his family in a plush apartment in the early 1900s. Keen to follow in the great writer’s footsteps in Paris? Read Michele Kurlander’s recent article about “stalking Proust from Paris to Cabourg to Illiers-Combray.”

Mehran Karimi Nasseri, the Iranian man who lived inside the Charles de Gaulle airport and inspired Steven Spielberg’s 2004 film “The Terminal,” has died after a heart attack in Terminal 2F. A medical team were not able to save him. As reported by ABC, “[he] lived in the airport’s Terminal 1 from 1988 until 2006, first in legal limbo because he lacked residency papers and later by choice. He had planned to settle in the UK but claimed his papers were lost when his briefcase was allegedly stolen… He was returned to France from London by British immigration officials. Because his entry to the airport was legal and he had no country of origin to be returned to, he began living in Terminal 1. Court cases in the following years ruled that while he couldn’t legally be expelled from the airport, he also couldn’t be given permission to enter France… His stay in the airport ended when he was hospitalized in 2006, and he went on to live in a Paris shelter.” It’s unclear why he had returned to the airport in recent weeks. Thought to have been born in 1945, Nasseri was paid $250,000 for the rights to his life story by Steven Spielberg’s Dreamworks’ production company in 2003.

Speaking of airports, Paris has opened a hub for testing flying electric taxis, the world’s first such service, which the city is hoping to launch for the 2024 Summer Olympics. (These flying-taxi bases are called “vertiports.”) Aeroports de Paris will operate the facility alongside the UK company Skyports Ltd. As reported by Bloomberg, “The hub at Pontoise Cormeilles aerodrome… combines a passenger terminal, take-off and landing area, mission control zone and hangar.”

In a major bid to boost France’s renewable energy industry, France has passed legislation to require car parking lots to be covered by solar panels. The newly passed legislation applies to large parking lots with space to accommodate 80+ vehicles. As reported by The Guardian, “The owners of car parks with between 80 and 400 spaces have five years to comply with the measures, while operators of those with more than 400 will have just three years. At least half of the area of the larger sites must be covered by solar panels. The French government believes the measure could generate up to 11 gigawatts of power.” President Emmanuel Macron is focusing on plans to grow France’s renewable energy production. “He visited the country’s first offshore windfarm off the port of Saint-Nazaire off the west coast and hopes to speed up the build times of windfarms and solar parks.”