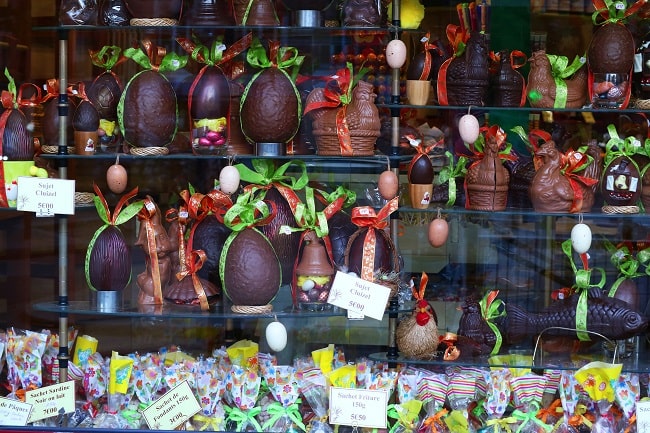 The Easter chocolates have arrived in the shop windows of Paris and it’s a sight for sore eyes. There are the usual chocolate chickens and bells and eggs — and then the fantastically whimsical creations that come straight from the imaginations of top chocolatiers. Many of these artisans have been planning these treats for months as sculpted works of art… in chocolate. From Alain Ducasse’s chocolate lobster to the incredible egg dreamed up by Pierre Hermé in collaboration with designer Thomas Boog, the season’s array is dazzling. Here’s one of our articles about top chocolatiers in Paris.

Do you have a favorite chocolate maker in Paris? Tell us in the comments section below.

From the Grammys to the Oscars, it’s awards season… and with most cinemas and concert halls closed, not to mention the ongoing need for social distancing, it’s a peculiar one. None more so than the annual César awards, the French equivalent of the Oscars, which were held last Friday night in Paris. And as author Agnès Poirier wrote in an op-ed for the Guardian: “The naked protest at this year’s César awards looked radical. In fact, it was a national embarrassment.” Actor Corinne Masiero appeared naked on stage, covered in fake blood, with words written across her torso: “No culture, no futur.” As Poirier explains, this “behaviour rang hollow, given the French state’s generous artist benefits, and the plight of creatives worldwide during the pandemic.”

A post shared by CRRSS | A GLOBAL THINK TANK (@thinkcrrss)

Forbes reports that France has been eating a record amount of cheese during the pandemic lockdown. Fans of fromage, the French have even invented a new type of cheese during this difficult period. (To quote the article: “In June 2020, the Vaxelaire family who breed a herd of 25 cows in the Vosges region in eastern France, near the German border, left rinds in the fridge and accidentally created a new cheese.”) Raclette and Emmental and Comté are flying off the supermarket shelves. But surprisingly, the top selling cheese is not French. Sales of Italian mozzarella have skyrocketed more than 20 percent.

In the pandemic fight, Europe’s vaccine rollout has now been further slowed as several European countries have temporarily suspended the use of the AstraZeneca vaccine over blood clotting concerns, pending a safety study by the regulator European Medicines Agency (EMA) that’s due on Thursday. Despite the fact that 11 million AstraZeneca shots have been administered in the U.K., and the EMA currently says the benefits to taking the shot far outweigh the risks, countries like France, Spain, Italy, Germany and Denmark are opting for precaution. An editorial in Le Monde bemoans this decision, highlighting the urgency of deploying strategies to fight the virus. “Let us not lose sight of the fact that the vaccine remains the only solution to overcome this pandemic.” The suspension of this vaccine only hurts its credibility, in a county that’s already notorious for vaccine skepticism.

Meanwhile, the French capital contains to remain on edge about the possibility of a strict lockdown. The deadlier and more contagious English coronavirus variant is now the majority of new cases in Paris, and intensive care in hospitals is inundated. As reported by the Guardian, “Emmanuel Macron has warned tough new measures may be needed to contain a new wave of coronavirus in areas of France where infections and deaths continue to rise.”