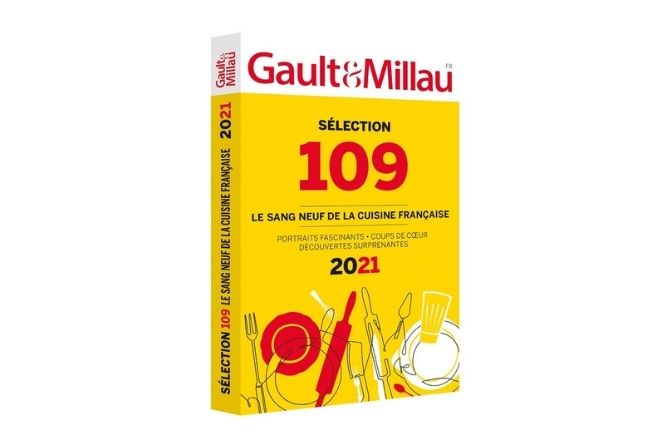 Since the 1960s, Gault&Millau (founded by Henri Gault and Christian Millau, two highly respected restaurant critics) has been in constant search of the magical alchemy that takes place wherever food and wine is served. The choice of establishments recommended by Gault&Millau is based on the objective evaluations of anonymous restaurant inspectors – according to their seven codes of conduct – including settlement of all checks and taking into account information received from the general public.

At present, French restaurants are closed (except for take-out or delivery). But to whet your appetite, flip through this delightful, newly published culinary guide. The 109 by Gault&Millau showcases young chefs, and their restaurants, waiting impatiently for you. The 109 are beautifully depicted, with joie de vivre, throughout this thoughtful homage to their life’s passion.

Who are the 109? “They’re enterprising spirits, following their dream, taking part in the exciting adventure of opening their restaurants, serving top quality food at affordable prices. They respect the seasons, and carbon footprint distances, using as much locavore produce as possible,” explains Marc Esquerré, GM’s Director of Guides.

The new young Turks to note and to tickle your taste buds (it won’t be long!) are located throughout the Hexagon from the Ardennes via Bouches-du-Rhone, Gironde, and the Var. We’re delighted to find Pierre Meneau (son of the late great Marc) who closed his highly rated Crom‘Exquis (Paris 8th) and is now to be found at La Plume, Presles, in the Val d’Oise department of Île de France.

“Inviting someone is taking care of his happiness during all the time he is in your household.” -Brillat-Savarin

Previous Article Book Review: The Spy Who Inspired Me by Stephen Clarke
Next Article Letter from Paris: March 17, 2021 News Digest