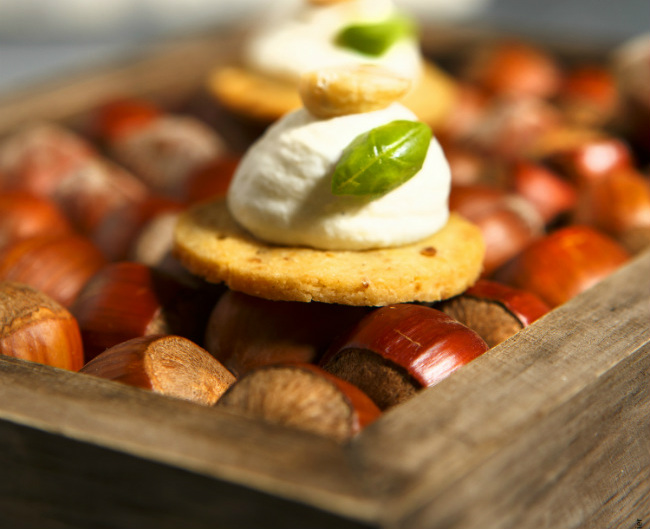 I first met Alan Geeam, an alchemist cuisinier creating gastronomic concepts, in the kitchens of Auberge Nicolas Flamel, one of the oldest eateries in Paris. Flamel was the14th century creator of the Philosopher’s Stone, the legendary substance with amazing powers. Geeam told me:

“You know how Hollywood is where wannabe actors dream of going? As a child in Beirut my dream was to come to France and learn to cook.” 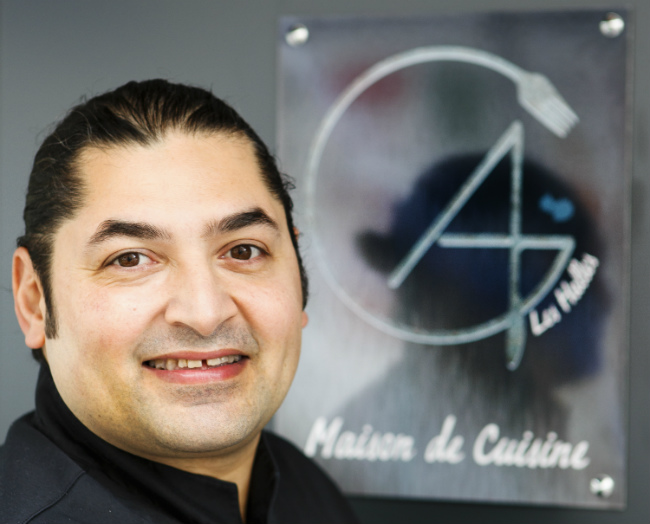 Alan Geaam lives, eats, and sleeps everything culinary. After training in Lebanon, Prague and Italy, he realized his dream by graduating from both Ecole Ferrandi and the Alain Ducasse Formation Argenteuil. Since 2007 he has been wearing “the blacks” at L’Auberge Nicolas Flamel. When he arrived, la maison had a reputation for rather stodgy old-fashioned food. Geaam transformed the menu with his light, bright, flower-strewn dishes and then went on to open a successful left-bank bistro AG. He’s still at Flamel and his eponymous Saint Germain address but, hang on a minute, “when I had an opportunity to take over and transform Autobus Imperiale, Les Halles– with which I was connected organizing events– I could not refuse!” 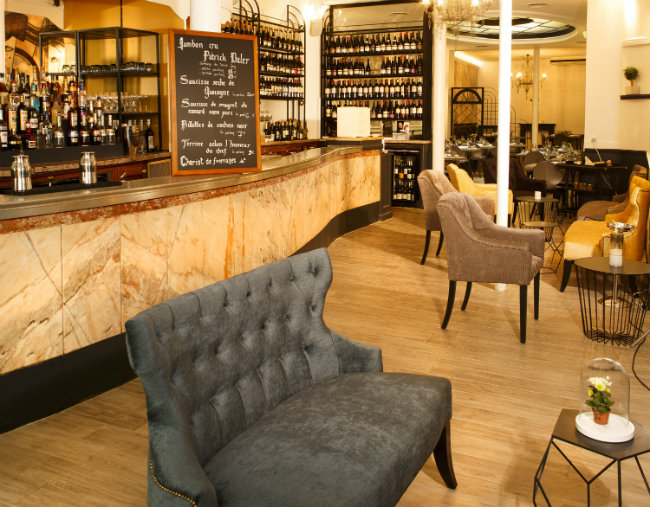 The bar at AG Restaurant-Les Halles

Housed inside a beautiful space that’s been classified a historic monument, the new AG Restaurant- Les Halles is located in the heart of the newly transformed Les Halles district. Historically, the marketplace of Les Halles was dubbed the “Belly of Paris” by Emile Zola. The first food stalls appeared in 1269 when King Louis IX commissioned the construction of three new buildings. The market was sadly demolished in the early 1970s, and replaced by the totally uncharming Forum des Halles in 1979 when the Paris wholesale market transferred to Rungis in the southern suburbs. You’re looking at 800 years of history and the City of Paris has invested in a redevelopment program of 12 million euros to rehabilitate the area. Architects Patrick Berger and Jacques Anziutti have designed the new, nearly completed glass canopy covered complex. The Paris of tomorrow is taking shape. Learn more here: http://www.parisleshalles.fr/00371 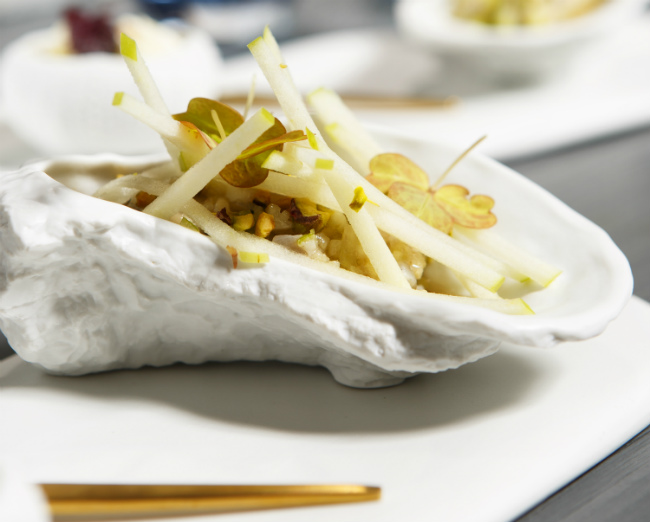 Time to celebrate AG’s new eatery with a bottle of Champagne Langlet, Rosé Grande Réserve (75€). The décor (by AG) is contemporary; there’s a long bar on the left for snacks (Saucisse de Parc Saint-Gery) and a verre de rouge, a few tapas, some organic charcuterie. Vintage-style restaurant tables are well spaced, and the walls are adorned with seriously interesting art work and a mur vegetal. 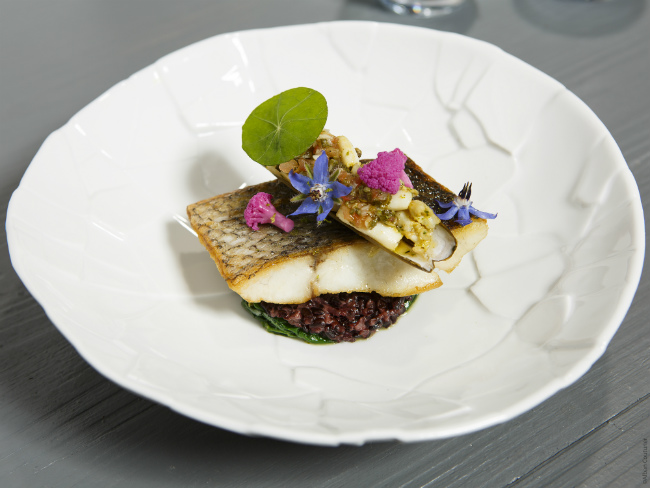 A dish at AG Restaurant-Les Halles

Choose from the chalkboard, the menu, or let AG guide you. The menus are priced from €18-€62 at lunch, and from €39-85€ at dinner. Begin with a composition of Oysters, Granny Smith apples, and kiwi. Then maigre fish risotto made with glutinous Venere rice, topped with razor clams, a smudge of salicorne (a type of seaweed) and a mountain bloom as are most of AG’s dishes. Mains include grilled pavé chevillard (beef) with marrow, parsnips, and tiny sausages (grélots). Fish of the day or Légumes de saison (from P. Thiron et C. Huistric) cuits comme une tourte. Desserts are light and lovely, as in savarin aux fruits but be sure you leave space for cheese by Monsieur Sanders the friendly, family-run fromagerie in the covered Marché Saint Germain, with a particularly good selection of aged Comté and sheep’s milk cheeses from the Pyrénées. Switch to red Crozes Hermitage “Galet” Hauts Chassis (bio) 2013 (37€) and don’t ignore the jam, “made by my Mother-in-Law!” 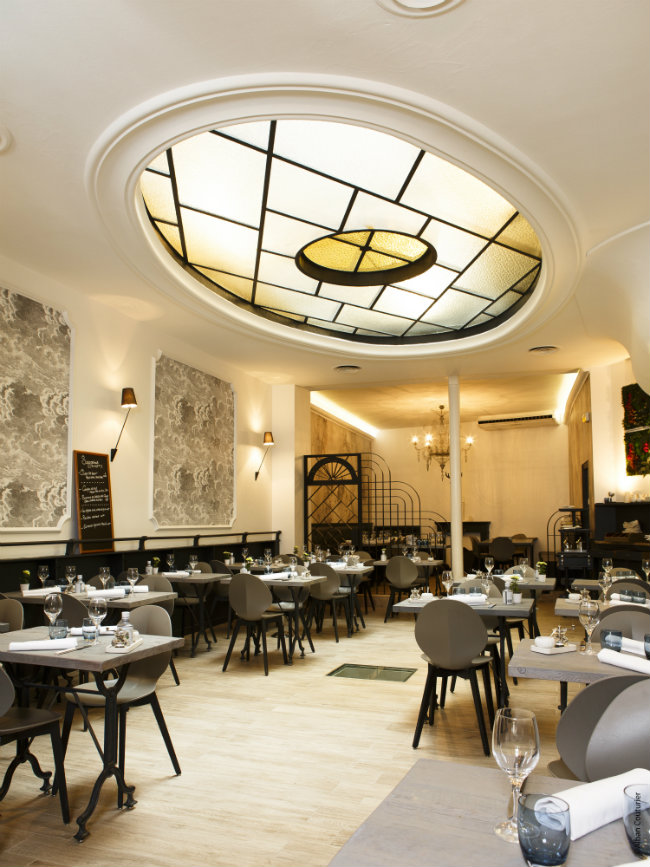