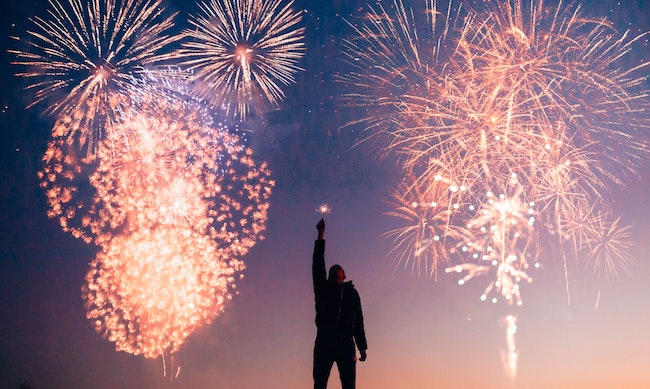 Here in Paris, the tradition of sharing new year’s wishes is alive and well. When January 1 rolls around, the marathon of greetings begins, as we declare “meilleurs voeux” to our friends, family, colleagues, neighbors, butcher, baker, and candlestick maker… There’s an etiquette to the custom and often the greeting is accompanied with a string of wishes— whether it concern health, happiness, love, or prosperity. It’s particularly heartfelt in 2021, as we turn the page on a terrible pandemic year. The Paris Metro Authority (RATP) is even saying good riddance to 2020 with a playful joke in the Bonne Nouvelle (“good news”) metro station. They’ve replaced the station sign with one that’s subtitled “l’année 2020 est finie!” So when your train pulls into the station, you’re greeted with the sign: “Good News: The year 2020 is over!”

We may be eager for 2021 to speed up and the vaccinations to stem the tide of the coronavirus pandemic around the world, but it’s been slow going in France thus far. Even President Macron blew up about the snail’s pace of the vaccination program, which places France at the bottom of the European bracket in terms of the number of vaccinations in the first week of the roll-out. According to the CovidTracker website, there have been a total of 7000 vaccinations now in France. (A Bloomberg article published on January 4 declared “vaccine chaos in the land of Pasteur.” To quote: “The homeland of vaccine pioneer Louis Pasteur, and the source of major scientific victories such as the discovery of HIV in the 1980s, is today at the bottom of the charts when it comes to coronavirus jabs.”) However the government claims it’s still on track to hit the end-of-January target of one million vaccinations, saying it has twice that number in stock…

But we can always let them eat cake, or kings’ cake! Tis the season for the galette des rois (kings’ cake) and there are some delicious and creative versions being concocted by top Paris pastry makers this year. As soon as the bûche de Noël disappears from French bakeries and pastry shops, another holiday sweet, the galette des rois takes its place. Named for the Three Magi, the galette traditionally appears before the feast of the Epiphany on January 6 and can be found throughout the month of January. A round of puff pastry is filled with frangipane and a fève— historically a bean but now a collectible porcelain trinket or metal charm— is hidden inside. Whoever is lucky enough to find the coveted fève is crowned king or queen for the evening and gets to choose their consort. However, because pandemic rules limits the size of social gatherings, many pâtissiers are choosing to make smaller sized galettes this year….

More in letter from paris, pandemic in paris

Previous Article The Museum of Art and History of Judaism: A Treasure in the Marais
Next Article Hotel de Sens: An Exquisite Medieval Jewel in the Marais