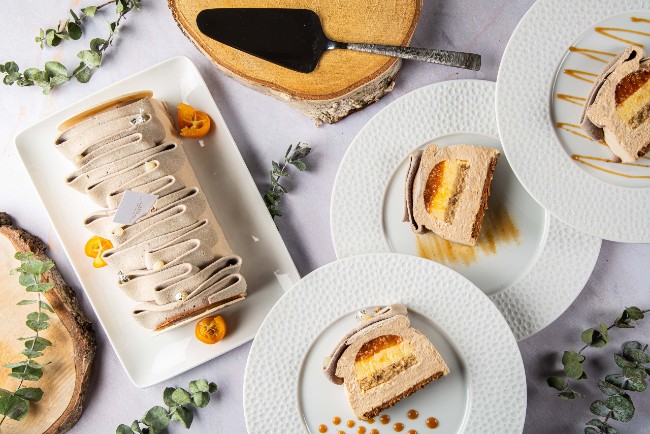 Christmas is different this year. However we’ll always have Paris and we’ll always have les beautiful bûches… Here’s our selection of 2020’s best yule logs, crafted by the city’s top pastry chefs and guaranteed to dress up the holiday table with some festive fun. What’s your favorite?

The two-Michelin star chef of Sur Mesure (Mandarin Oriental Paris) also heads the eponymous MARX Bakery brand with four buzzing Parisian boutiques: rue Laborde in the 8th, Beaupassage in the 7th, Galeries Lafayette Haussmann, and 69 avenue Marceau. At the latter, all your Xmas/Epiphany favorites are now starring at the former Joséphine. This major league bakery / pastry shop / tea room has a new lease of life thanks to MARX & Co. Bûche 39€.

Just 100 unique bûches, numbered and signed, by chef Akrame Benallal with pastry chef Killian Le Houerou. Le Pavé Parisien is inspired by the iconic Paris cobblestones that have lined the streets since the 12th century. It’s also an homage to May ’68. Sous les pavés, la plage!  (“Under the cobblestones the beach”)– one of many inspirational, provocative slogans graffiti-ed around the city at that time. And, photographer Mathieu César captures Le Pavé Parisien in black and white; find one of his images hidden beneath the log (one in 10 reveal a surprise photo). For six people, the price is €120 and, thoughtfully, €20 goes to Restos du Cœur.

As a tribute to the origins of César Ritz, Switzerland comes to the Ritz Paris for the hotel’s gourmet, end-of-year celebrations.

The “Mont Ritz” log, designed by über pastry chef François Perret, takes gourmet delicacies to the summit of Christmas. The Monts, with chestnut cream and chopped chestnuts, are made light with airy whipped mousse, almost a cheesecake on a base of crunchy shortbread crumble.

“I designed this log to be fresh and light as snowflakes, a taste sensation that immediately transports foodies off-piste to the magic of Christmas in the  mountains,” says Perret. Come and taste at Le Bar Vendôme. Until December 24th. €26 per person. Or order for six people, 48 hours in advance, by calling 01 43 16 33 74. Priced at  €110 – Limited edition

Composed of a cookie and crispy pecan, the heart of the log includes vanilla caramel and maple syrup. There’s also a pecan praline, vanilla mousse and maple syrup. It’s topped off with Couvreur’s signature chocolate fox garnished with pecan praline. Chef Couvreur is particularly fond of Christmas, for him “it’s a playground permitting all the follies.” The log, at the center of the table, brings loved ones together around the most important moment of the meal.

La Bûche Isatis, for six people, €90. Get it in all YC boutiques or order via Click and Collect.

For his limited edition logs, the “Picasso of pâtisserie” takes a poetic ascent into an imaginary universe, in collaboration with edgy, Paris-based cosmic street artist Philippe Baudelocque. Using variations of blackcurrant, redcurrant, lemon and Pure Origin Belize (Plantation Xibun, transformed by Valrhona chocolate), the aromatic notes consist of blackcurrant, pepper crumble and geranium. The chocolate shell, crowned with a constellation of shooting stars, signals a trip to foodie heaven. 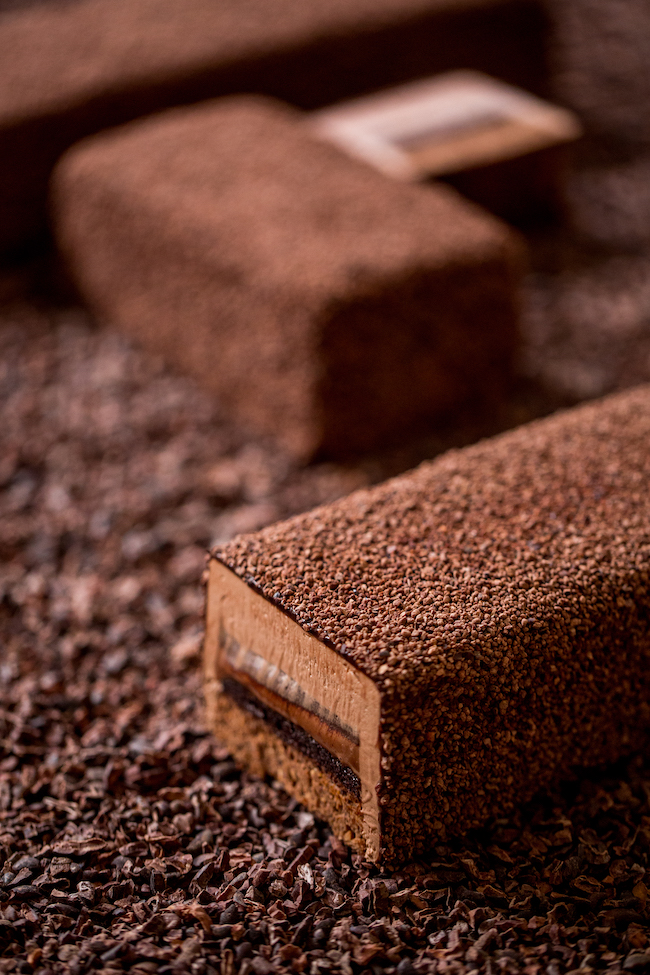 La Bûche de Noël, by Executive Chef David Bizet, for his first Christmas at The Peninsula, Paris, has subtle combinations of flavors and textures. To a crispy base he adds toasted vanilla and roasted buckwheat, white chocolate ganache embellished with kiwi and a vegetal note making it sweet/savory and surprising. The Bûche (non gluten) are made to order (six-eight bûcheurs) for €95.

Delicious nougat made according to the traditional Montélimar recipe, this honey covered meringue log hides a soft Montélimar almond biscuit and creamy Corsican orange cream surrounded by a honey-almond mousse.

Chef Nicolas Paciello’s yule message highlights the work of French producers and products. Order and collect until December 27th. The price is €75  for eight people.

With his exciting pâtisserie-boulangeries, Benôit Castel breaks the codes of  tradition with open kitchens and wood fired ovens. The Paris boutiques (39 rue de Vinaigriers in the 10th; 72 rue Jean-Pierre Timbaud in the 11th; 150 rue de Ménilmontant and 11 rue Sorbier in the 20th) have special design identities. (There are also two boutiques in Tokyo and soon in NYC.) Choose between the bûche chocolate and/or bûche fruit. €6.40 for a slice. €27 for four people. €37 for six and €47 for eight people.

Previous Article Antiques, Brocantes and Classic Clothes: The ABCs of Vintage Shopping in Paris
Next Article A Chat about the Paris Real Estate Market with Realtor François Madet