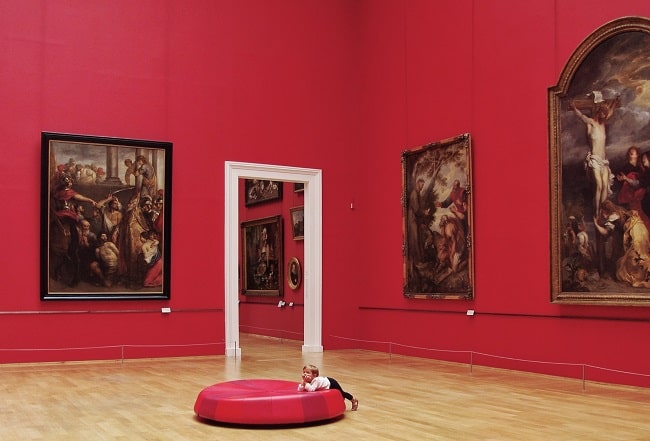 The cold days of winter have set in– a perfect time to head to a Paris museum to catch some great exhibits before they close. Many of the autumn’s can’t-miss exhibits close in January and early February, including Leonardo da Vinci at the Musée du Louvre, Toulouse-Lautrec and El Greco at the Grand Palais, and Picasso, Tableaux Magiques at the Musée Picasso, Paris. Let’s uncover a few of the treasures awaiting us on these cold, dark days.

Taking over from the Degas exhibition at the Orsay is an exhibit dedicated to the art critic Joris-Karl Huysmans. The French writer was a lifelong lover of the Danish masters until a chance encounter at the 2nd Impressionist exhibition in 1876 where he saw a painting by Degas. It changed his perception of the Impressionists, which led to an appreciation of the Symbolists and later the Primitives. The exhibition includes three sections based on the transformation of the author himself featuring the art of Caillebotte, Moreau, Grunewald, Gervex, and Degas among many others. The use of color in each section designed by artist Francesco Vezzoli adds to the progression of the art and brings the exhibition to life. Running until March 1, in the historic train station turned museum, the Musée d’Orsay.

The Musée Marmottan Monet, on the far edge of Paris, is a small museum that is worth the time it takes to get there. Don’t let the name fool you; it isn’t just Monet you will find here. The permanent collection includes many of Monet’s own collection painted by his friends like Berthe Morisot and of course the Monet painting that named a movement, Impression at Sunrise. Three times a year they also hold wonderfully curated exhibitions. Cézanne et les Maîtres. Rêve d’Italie runs from February 27 until July 5 and is a rather unique look at the Post-Impressionist pieces next to the many Italian masters Cézanne admired. Spending many hours in the Louvre as a copyist, he discovered Tintoretto, El Greco and Girodano. Instead of straight copies, Cézanne used the masters as inspiration. On display are his many paintings alongside the original. It is fascinating to get a glimpse into the mind of an artist and see what he sees. Nicolas Poussin’s Paysage avec Bacchus et Cérès next to Cézanne’s Pastorale and Francisque Millet’s Paysage classique compared to Cézanne’s Montagne Saint Victoire are just a few to admire.

The ever popular Atelier des Lumières has what will for sure be another hit with a multimedia exhibition dedicated to the Mediterranean and the artists that were drawn to it. Opening February 28, Monet, Renoir…. Chagall, Journey around the Mediterranean will also include the paintings of Pissarro, Dufy, Signac, Vlaminck, Derain and Matisse. Van Gogh was one of the first artists to be drawn to the south for its never ending sunlight and changing colors and the other artists soon followed. Cycling from the Impressionists, Pointillism and Fauvism, the exhibit will feature over 500 pieces of art some of which are in private collections and hidden from view. The master of color and dreamy paintings, Marc Chagall plays a heavy roll in the exhibit and I can’t wait to see his floating images of love glide across the walls. Buy tickets in advance for this, they do sell out in advance. 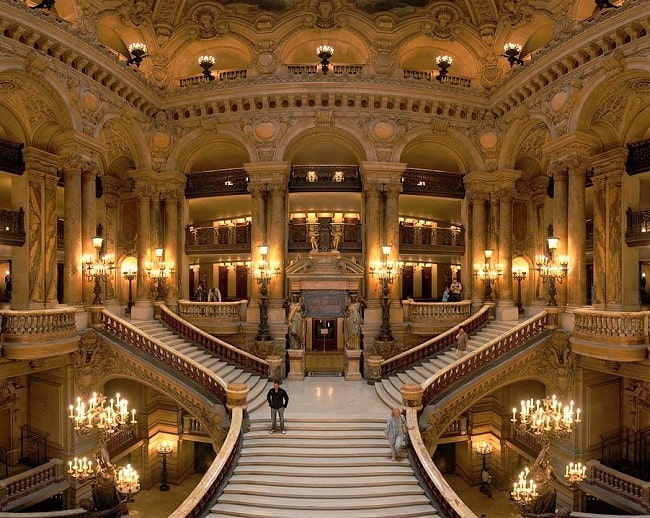 The beautiful Palais Garnier is much more than an opera house. Of course it is one of the most stunning buildings in Paris inside and out, with its hall of mirrors that rivals Versailles and the ceiling by Chagall. It also holds small special exhibitions. From Picasso to Degas to the current Le Grand Opera that begins after the 1830 Revolution. It focuses on the authors, actors, dancers and scenery that came to light at the time, transforming the stage with new techniques and larger than life scenes. Paintings of the actors in costume, scenes and the grand opera houses of the time are all included in the exhibit until February 2, showcasing a short period in the history book of the Opera in Paris.

For the more contemporary art fans out there, a rather unlikely museum is holding an exhibit honoring a living artist. The Musée du Louvre is normally where you will find art dating back thousands of years and up to 1848. A strict rule– stretching back to the mid 1800s– was that artists were only displayed in the Louvre 10 years after their death, which left many with the dream of seeing their work hanging in the Salle Daru out of reach. Prior to that and at the beginning of the Louvre we know today, the bi-annual Salon exhibitions filled every inch of the walls with living artists garnering for the attention of the art elite. Today the Louvre has begun adding some more contemporary exhibits from living artists which has come under mixed reviews. On display now in the Salon Carré, the former site of the Salon and also the room that held the second wedding of Napoleon Bonaparte, is the exhibit dedicated to Pierre Soulages in celebration of his 100th birthday. 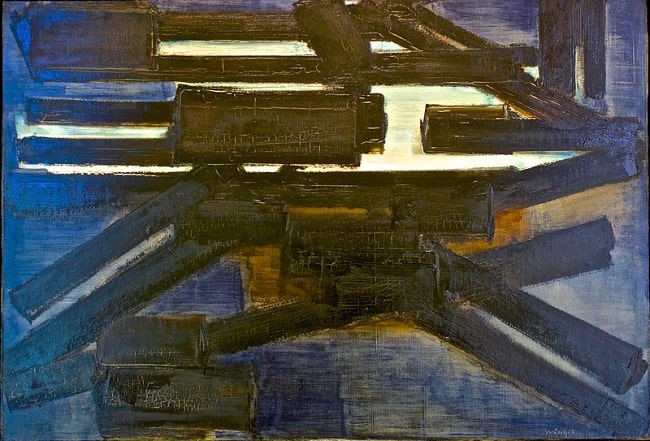 Only two other contemporary artists before him have had a solo exhibition in the Louvre: Pablo Picasso and Marc Chagall. On display until March 9, twenty of his more than 1700 paintings from 1946 to the present showcase one continual theme, darkness and light. Using a color palette of only black, through each stroke and texture he creates many colors that change in the light. “I paint with black but I’m working with light… It is the differences of textures, smooth, fibrous, calm, tense or agitated that, in capturing or blocking the light, bring out the grey blacks and deep blacks.” As you enjoy the newly renovated Gallerie d’Apollon and make your way to the Grande Gallerie, be sure to spend a little time in this treasure of a room enjoying these amazing large paintings and the historic moment you are a witness to.

Rodin is remembered as one of the greatest sculptors in French history. His emotional and larger than life statues that are known throughout the world with their classic forms may be an unlikely pairing for the special exhibition held this season at the Musée Rodin. English sculptor Barbara Hepworth isn’t well known in France and has only had one other exhibition in Paris, 60 years ago at the Musée Rodin. Hepworth came to Paris in 1933 at the age of 30 and ended up meeting Picasso and Mondrian and later Calder and Miro. Inspired by nature and plants, she began a career in sculpture focusing on the void and solid aspects. Working with wood, clay, plastic, stone and bronze, she worked with her hands, bringing these many shapes to life until her last days in 1975. After 60 years her expanded portfolio returns to the Rodin to be displayed next to the master of the human body all set in the beautiful Hotel Biron backdrop of the Musée Rodin until March 22.

Traveling back to the days of the monarchy, a trip to the Chateau de Versailles never gets old. The formal palace that the Sun King painted with his golden wand is always a terrific day trip from Paris, even if you’ve been before. Walking through the opulent rooms can bring out your inner Marie Antoinette, and the palace also holds small and fantastic exhibitions throughout the year– all with a tie to the former seat of power. Until March 15, Versailles Revival focuses on the years 1867-1937 and the rebirth of a building that could have been lost. After the days of the Revolution and the angry mobs that stormed the palace (taking anything they could), it would be Louis Philippe in 1837 that would bring her back to life. Restoring each room and installing a museum, he gave new purpose to the historic walls. Empress Eugénie’s fascination with Marie Antoinette would continue the focus on the restoration that would catch the eye of the elite. Transformed into a ceremonial building for the French Republic, the Chateau de Versailles would draw the greatest authors, artists and actors to see it for themselves. Actress Sarah Bernhardt performed for Tsar Nicolas III and Pierre Puvis Chavannes and Eugène Lami captured the fountains and gardens in paint. All of this and more is on display and will give you a deeper understanding of this grand palace and the many lives it has had.

Spring is just around the corner and there are even more exhibitions to look forward too. Did someone say Christian Louboutin? Hold the door, my red heels are running straight for it! 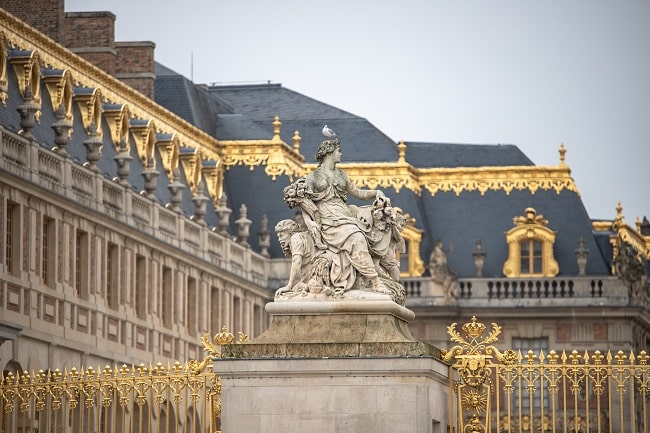