Perfect Play-Spaces for All Ages in Paris: A Psychologist’s Take 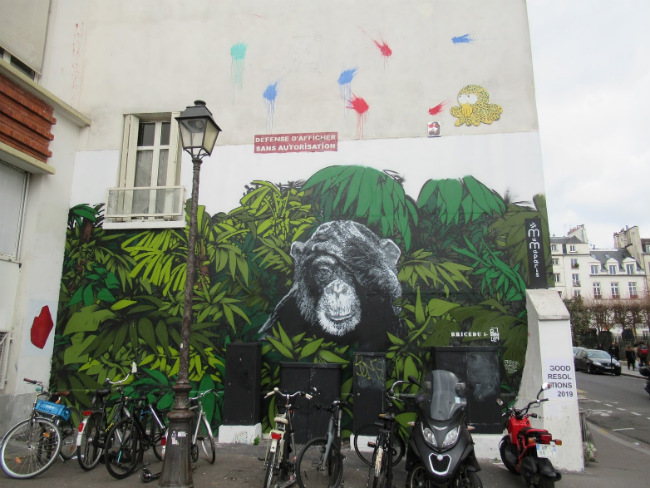 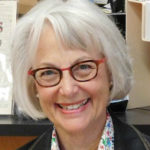 There is no doubt that children thrive when they develop their imagination through play. Pretend-play helps a young child make sense of the world and how to live in it; it helps adults maintain balance and creativity. Because play is a hard-wired capacity of people (as well as many animals), it needs only some internal comfort and external acceptance to flourish. 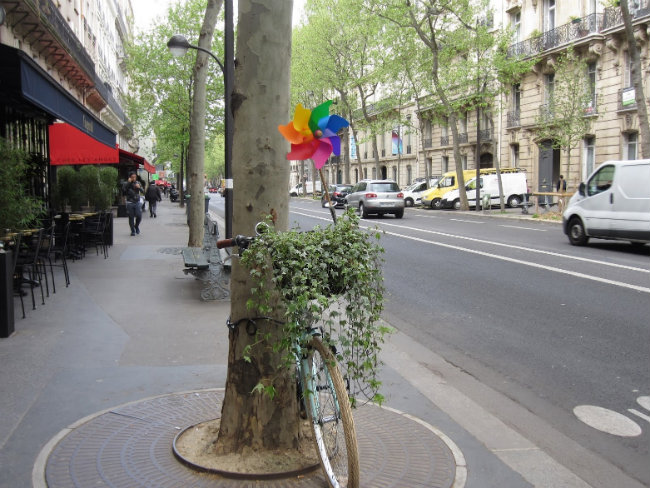 That’s where Paris comes in. Paris is the perfect place to nourish the imagination of children and adults alike because it sanctions and supports whimsy, applauds non-goal directed behavior, offers countless examples of transformation, explicitly underscores the value of pleasure, supports diversity in perspective, encourages creativity in any facet of life, and, more specifically, has countless props and places that lend themselves to developing and exercising the imagination (for example, see Les Folies in Parc de la Villette and Les Cabanes at the Cité des Sciences.)

Let’s look at the ambient stimuli first, those features of Paris that are available to anyone who visits the city. Happily, they occur across the arrondissements. 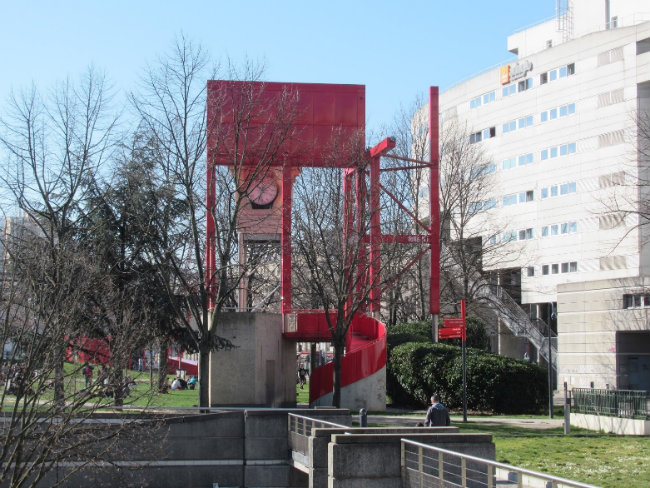 Whimsy, unique combinations. Paris is loaded with surprises. Turn a corner and a shimmering pyramid announces the entrance to the 16th century palace containing the late 12th century castle that, as the current Musée du Louvre, holds more than 380,000 pieces of art from around the world. Descend to the lower level of the Sully Wing and discover the Medieval Louvre, the walls of the original castle, revealed during excavation in the 1980s to create underground parking. Today they are preserved. Taste that unfamiliar flavor of ice cream or chocolat or macaron and find a new temptation, perhaps a new texture. In January, bite into a galette des rois and five the fève hidden inside the unique pastry; who doesn’t enjoy an unexpected prize? 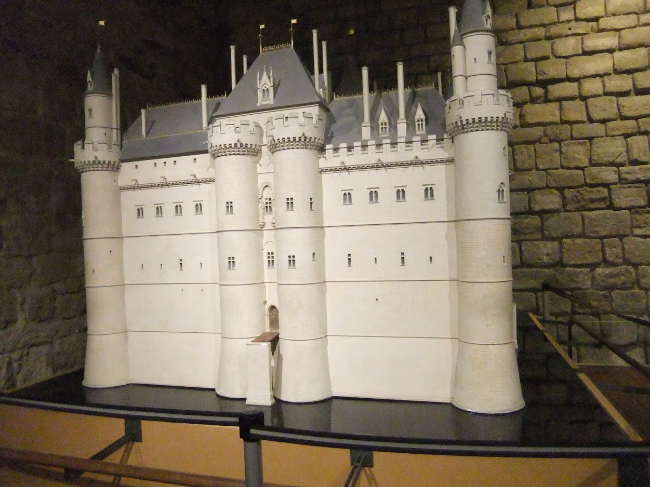 Model of the original castle in the Medieval Louvre. Photo: David Griff

A commitment to non-goal directed behavior. Parisians adore the aimless wandering that supports discovery and have a word to describe it that does not translate – to flâner, as a verb; le flâneur or la flâneuse, as a noun. One sunny day last March, a different example, we sat for three hours in a small neighborhood park, watching the children explore the equipment: sliding, bouncing, climbing, spinning, swinging, jumping, rocking, chasing, hiding. Moms and caregivers watched from the sidelines, no interference except by one Mamie who was supervising a tiny grandchild. The children were free to investigate, to master, to determine when they were ready to move to another activity. Their own internal goals guided them, superseding those from external monitors of behavior such as clocks, standards, demands and expectations of others. 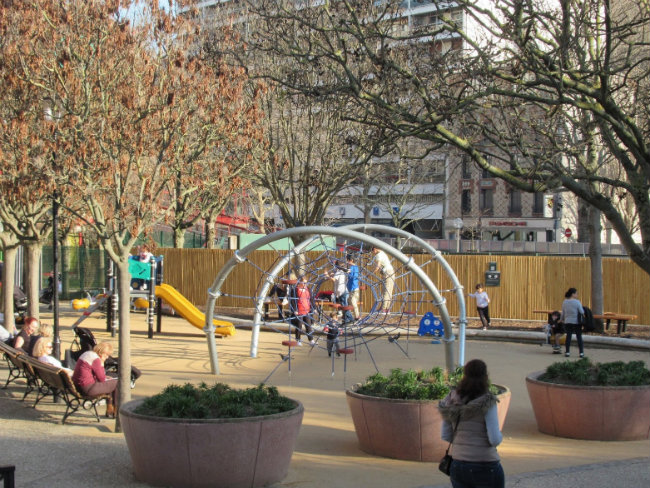 Playground in the 16th on first warm day of spring. Photo: David Griff

Transformation. Parisians and visitors alike cannot miss exposure to transformations, large and small, and the delight they bring. Bigger ones, such as the architectural marvels of the Musée d’Orsay, a train station made into an art museum; le Centquatre, a funeral home transformed into a space for experimental performance artists of all ages; Atelier des Lumières, a foundry made into a showplace for digital displays – itself a transformation of visual art into new multi-modal experiences, all make grand statements. 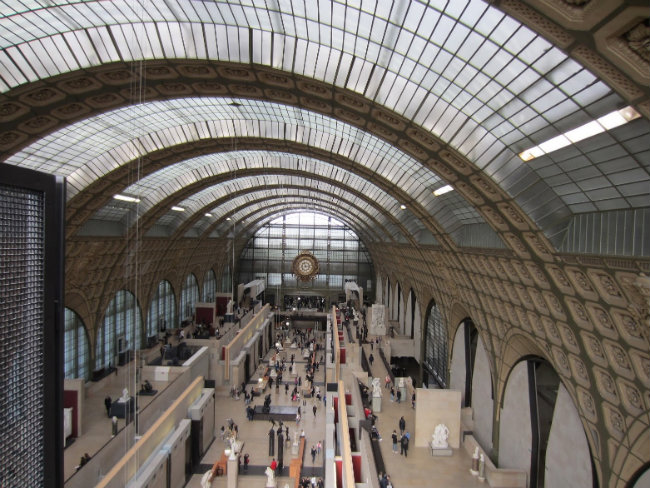 Transformations also abound in smaller less permanent forms – pastries decorated for seasonal commentary, outfits repurposing vintage pieces into modern ones, the Place de la République hosting a center for constructive and expressive imaginative play for children of all ages, mimes in costumes from kings or queens to clowns popping up periodically all about the city. Mirrors in the Jardin d’Acclimatation offer alternative reflections. Auto showrooms on the Champs Elysées bring visions of future transportation. 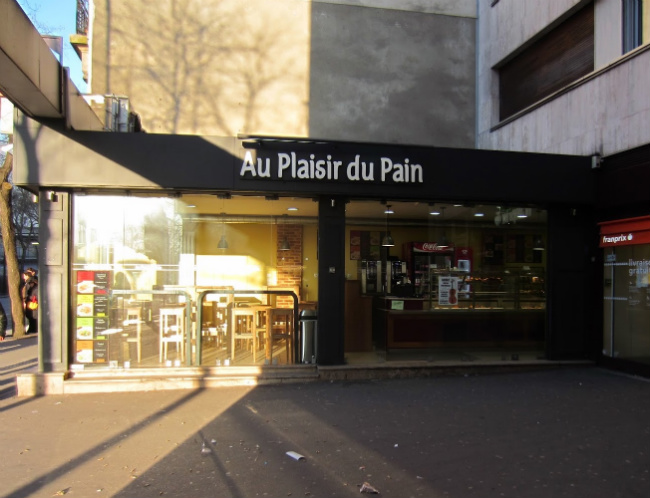 Pleasure. For me, the hallmark of Parisian experience may be “le Plaisir”. Pleasures for all the senses, for the moving body, for the mind, for the soul, pervade the city. Signs encourage “le Plaisir de lire”, “le Plaisir de manger”, “le Plaisir d’amour”. Children learn that both gustatory and social pleasures are essential parts of mealtimes. As soon as a child can read, the importance of pleasure as a part of life is literally spelled out in signs and on storefronts across the city. By sanctioning the experience of pleasure, the experience of playfulness is supported. For good measure, a circus or theatrical performance or other stage amusement is always available as entertainment. 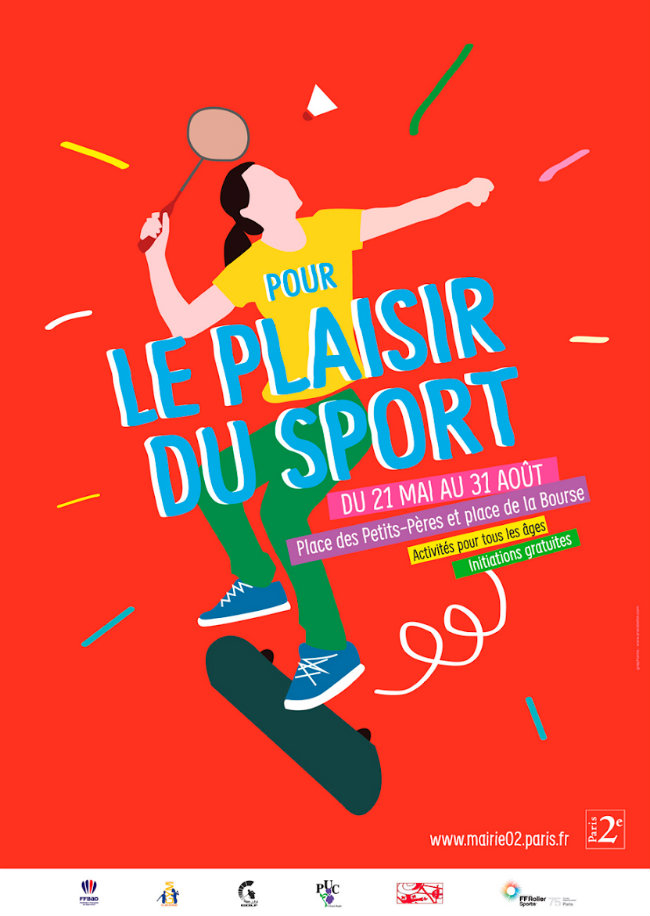 Diversity of perspectives. A walk through the streets of Paris offers a panorama of perspectives. From the enormous street art on the sides of buildings in the 13th to the small and whimsical pieces tucked alongside a doorway or over a window, Paris offers street art in a range of styles and locations. Climb l’Arc de Triomphe; the Eiffel Tower; the staircase to the roof at Galeries Lafayette, Maison de la Mode; or the steps to Sacré Coeur and note the many ways Paris seems to change with heightened perspective. 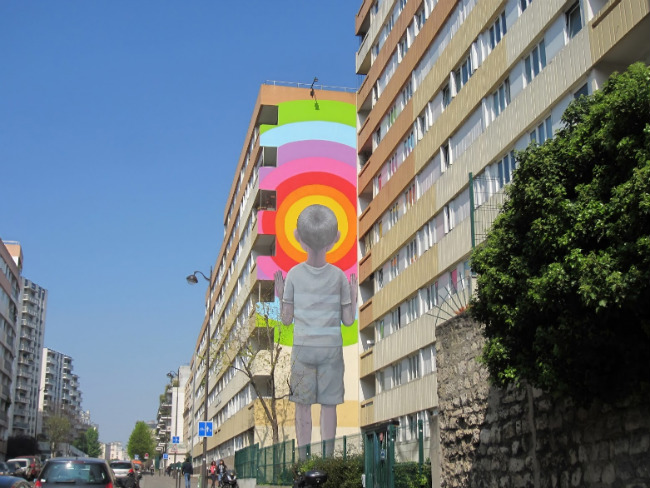 Periodically revisit Place de l’Alma and note the color of the domes atop the Russian Cathedral; it may be anything from gunmetal grey to copper to a pink-tinged brass, depending on the season, time of day and weather. Recently, while lunching at Auberge Bressane, we watched as Pierre K*, the Magician, enchanted the girl at the adjacent table and then joined us to challenge what we thought we were watching. The modeling and mirroring invited by mimes, marionettes and magicians reinforce the value of multiple viewpoints and offer practice in expressing them. 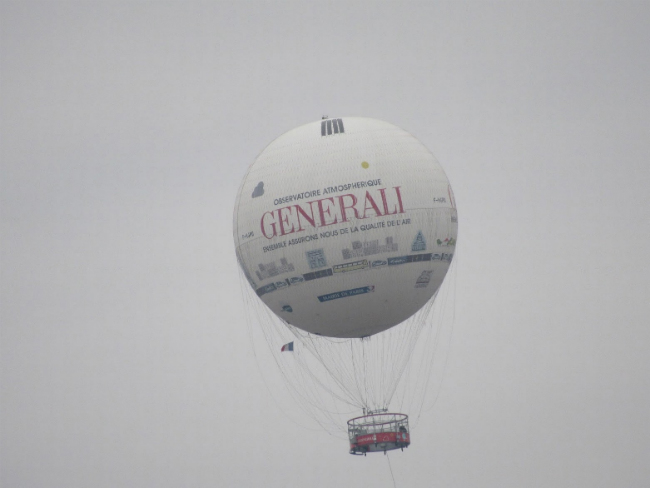 Creativity. With les Nounours des Gobelins, creativity in Paris hit a universally appealing note. The giant teddybears that the enterprise fashioned have been appearing between the 5th and 13th in pharmacies, bookstores, restaurants. The teddybears have been spotted eating, discussing, playing sports, and even celebrating a wedding at the Mairie du 13ème. The baby of the wedding couple has been spotted at the restaurant Le Banquier. Costumes, storylines, details all offer feasts for the imagination. Decorative details carefully crafted on clothing, the presentation of food, window displays – even knitted “hats” perched atop newel posts that stand guard protecting sidewalks along the road – underscore the importance of creativity and its important role in the culture. 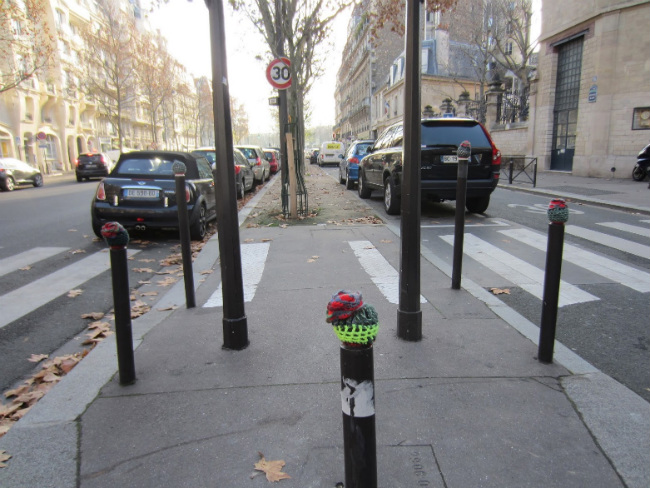 Knit caps for posts in the 7th. Photo: David Griff

Props and places. The teddybears, themselves testimonials to the Parisian penchant for whimsy, Plaisir, creation, are not far from the props that provoke such play or the places that invite it. Props appear in the ambiguous form of scarves and hats, amply collected in almost any French household, and in the treasures scavenged at brocantes that populate the riverbanks, sidewalks, and outdoor marketplaces during weekends. 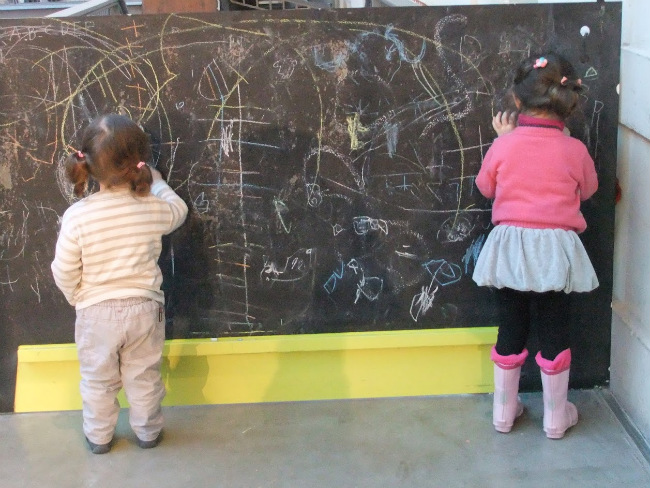 A playground can be transformed into a stage that invites stories to be enacted. Figurative art or posters can entice playful imitation. And architecture can stimulate fantasies of activities within its spaces. In a current exhibition, designed for children five and younger, Cité des Sciences et de l’Industrie offers “Les Cabanes” – little homes – inventive settings designed to evoke ideas, reinforce exploration, and promote play for small children.

In summary, Paris nourishes play for people of all ages, from one end of the city to the other. Meta-messages underscore support for imagination, for remaking old standards into new forms and functions, for appreciating discovery, surprise, whimsy. On your next Paris exploration, what delights can you spot? 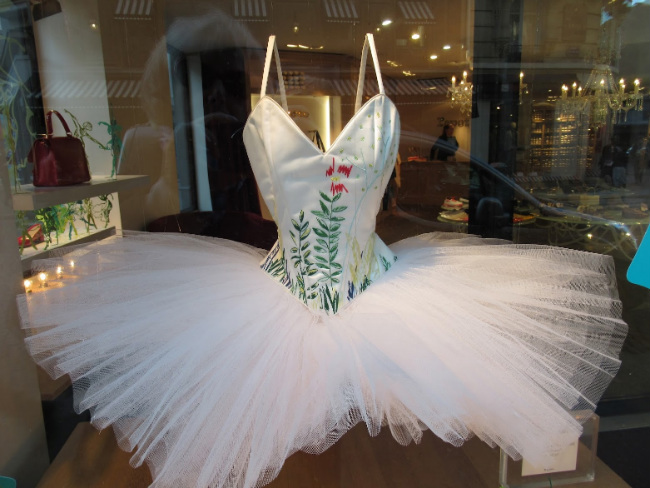