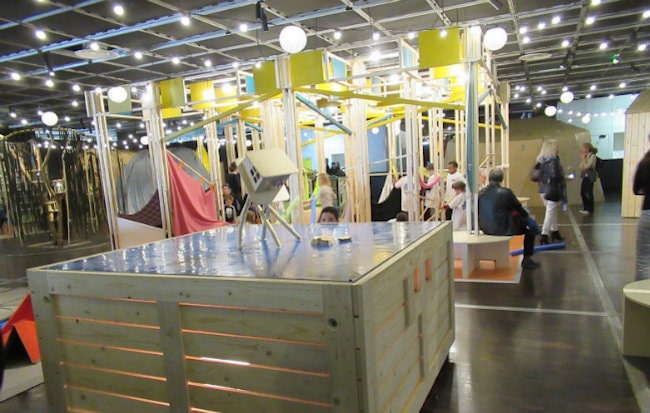 Just before Christmas 2018, a new exhibit entitled “Les Cabanes” opened in a central space on the upstairs floor of the Cité des Sciences et de l’Industrie at the Porte de La Villette. This exhibit deserves every meter of space and every accolade that it can collect. A collaborative creation of artists and experts, the exhibit offers more than a dozen different micro-environments – “cabanes,” or “cabins” in translation – where small children can play, discover, build, imagine, create, explore, share, hide, congregate, pretend, construct. 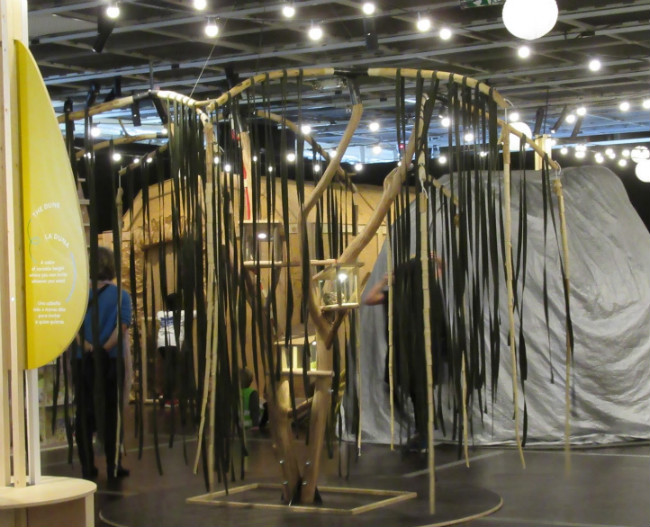 As a clinical psychologist, my early work centered around play and its role in a child’s cognitive, emotional, behavioral and social development. I was therefore obviously excited and intrigued to learn of this project and delighted when my husband, always great company and a good photographer, was on board to travel to la Villette to see what it was all about as soon as we arrived in Paris on a recent trip, just days before I was scheduled to lead a workshop about play for parents and caregivers of children up to five years at the American Library in Paris. 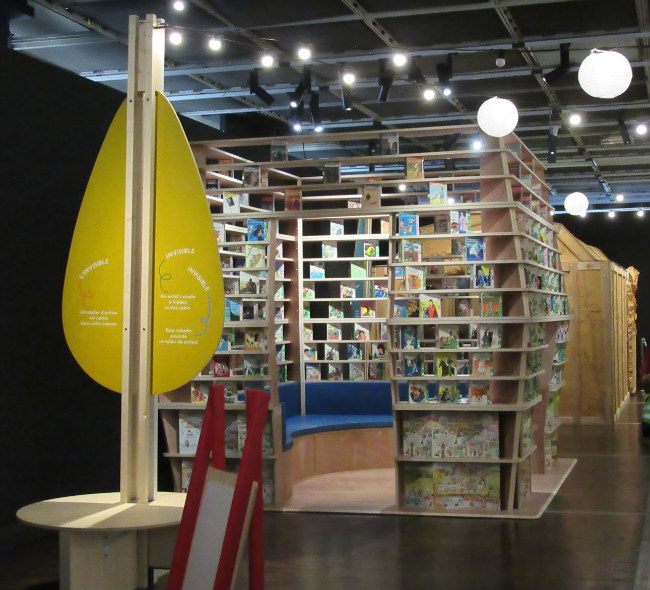 Upon arriving, we learned that a timed-entry ticket was required for the special exhibit. While we waited, we studied an overview of “Les Cabanes”, allowing us to gather a sense of their variety and placement in the large area allotted. The artists, artisans and designers who put together the mini-environments were clearly thoughtful, creative, and industrious. We watched as small children accompanied by a caregiver or gathered in supervised groups during the vacances scolaires, approached the different structures. I asked a woman in charge how she limited overcrowding: did she ask people to leave after an hour? She smiled. “The children self-regulate,” she answered (in French). Apparently, without external interference, the attention spans of the children guided them through the cabin opportunities and told them when it was time to move on. 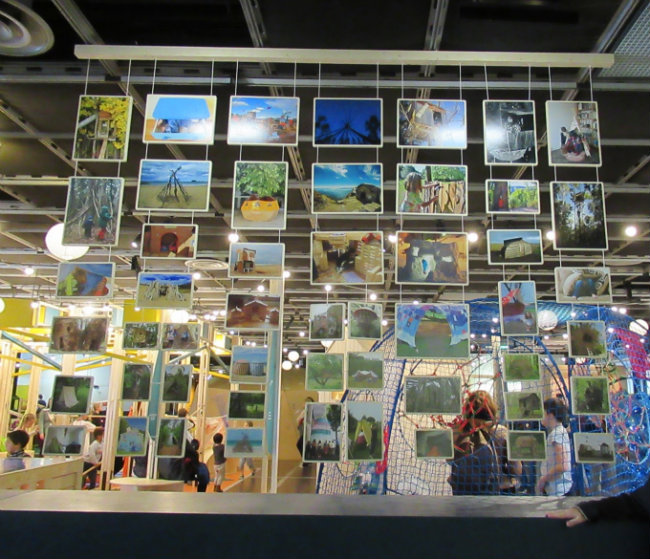 Once we were allowed inside the protected area, we began to watch as each child was free to move through the spaces, their natural inclinations capitalizing on the opportunities in front of them. Some seemed motivated primarily by curiosity, others by an urge to create or construct, and still others by finding their personal comfort zones, spaces in which they felt safe and protected and in control. 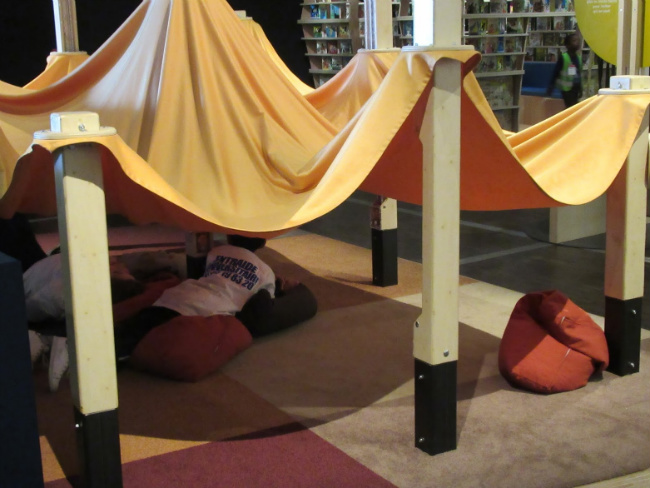 One small boy, oblivious to his surroundings, seemed mesmerized by a square box, nearly as tall as he was, that had a handle on its side. By rotating it, he could manipulate a box that sat on top of the larger wooden box, causing a structure resembling a small birdhouse to raise up, turn, collapse, straighten– all as the child chose. The budding engineer seemed intrigued by the mechanics of the installation and determined to master its management. 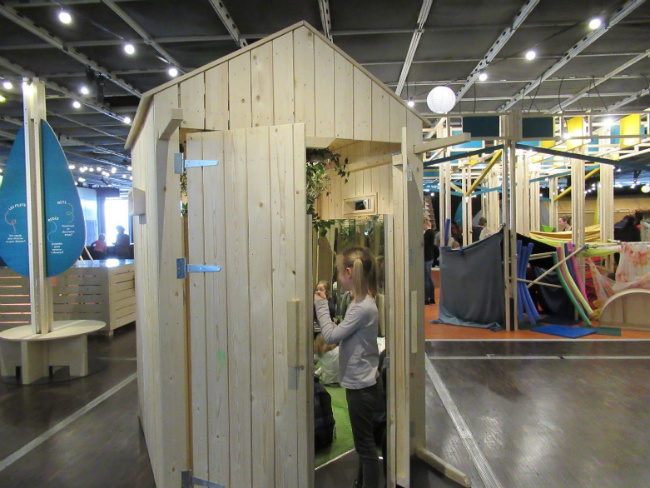 A few feet away, several children dragged pillows and cushions into what looked like a Bedouin tent. They were claiming the floor as a communal space for close physical contact and rest. Open sides of the structure guaranteed the children would not be isolated from the outside world. The height could be changed using cords and pulleys. 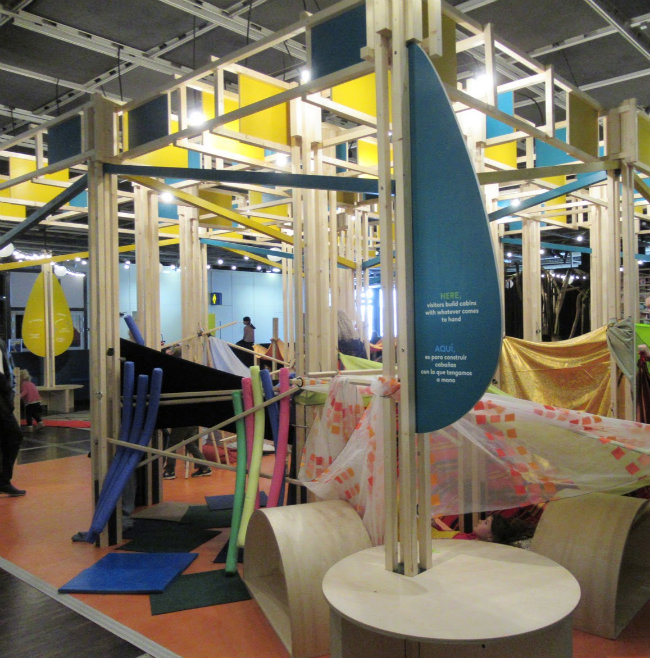 Some children seemed fascinated by the materials used in a cabin – huge empty plastic water jugs, plexiglass panels and transparent plastic ribbons that made up an Igloo-looking structure; another cabin constructed from dense knots made from of a variety of materials and stretched onto a metal frame.

In the center of the exhibition, “Le Défi”, a construction area, defined a space where children could design, build and embellish their own cabins within a cabane. Pieces of fabrics, Styrofoam noodles, blocks, planks, and other materials were available to touch and twist and tangle as a child modified a structure to his or her liking.
One cabin, “Inside-Outside”, allowed children to reverse panels. Those that initially faced outside, where “Le Défi” and other cabanes sat, could flip to face the interior. Because this cabin resembled a small cottage, a sense of home could be adapted to bring in more – or less – of the outside world. Thus different children could explore their own comfort with various boundaries and arrange them to their liking.

With all these structures and animated activity taking place in a large but ultimately limited space, along with a substantial number of children exploring them and some accompanying adults observing or occasionally helping, I began to wonder how individual children were managing the potentially high level of sensory and social stimulation. Were they thriving, excited by the increased chances to explore and create? To interact with each other and with materials, space, openness? Or were they overwhelmed by sensory overload or by social dynamics? 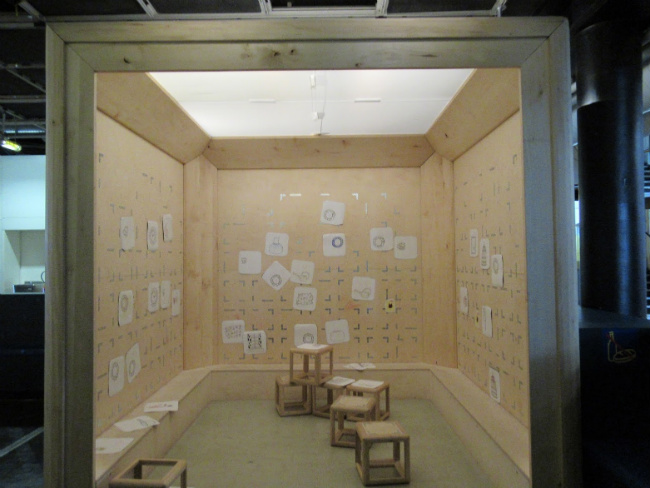 As I watched from the sides, the children were indeed “self-regulating”. A cabane would attract some children when a mechanism intrigued them, like the “Box on Top of the Box” or the “Treehouse” or the “Invisible Cabin”. In the latter, reality only appeared once light shining from a pillar-shaped “cabane” was permitted to reveal the normally unseen art that required new circumstances to be revealed.

Or perhaps materials called to be explored, like the “The Traveler”, a tent made from many materials woven multiple ways; or “Origami”, folding mats that could shape a cabin or even cover up a child inside; or “Costumes/Outfits”, in which cylinders covered in blue and white striped canvas could be turned into coverings to display or disappear into. 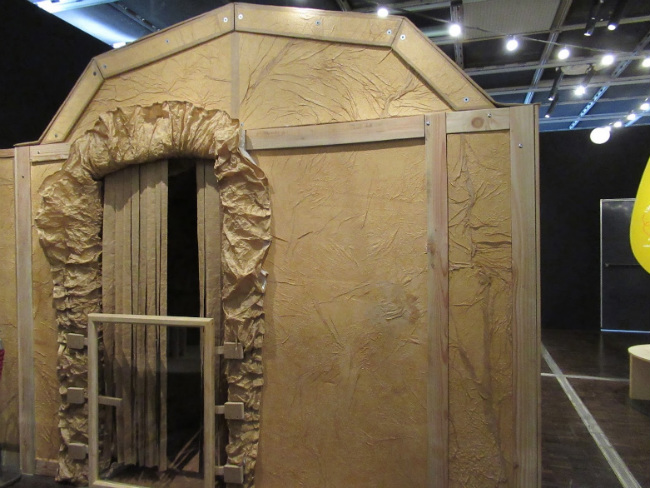 “Les Bonbonnes”, those plastic jugs making the see-through igloo, and “Les Filets”, the cabin featuring knots, or the central “Le Défi”, where children could build their own cabin from multiple materials, were especially popular on the day we visited.
Some cabins seemed to invite communal play; others promised more solitary opportunities. Natural extroverts gathered in “Le Défi”, the large center area. There they constructed their own cabins or worked together. Other children gathered in the Bedouin Tent, or in the Igloo or “Le Cube”, an unfinished cabane that invited children to add their personal touches to the inside of a gigantic cardboard box, attracting budding artists and architects.

Some cabanes invited a child to enter and explore the unknown. Among the latter were wooden beach cabanas, one lined with mirrors and featuring a ceiling of greenery for an illusion of infinity, another with opportunities to write on the walls, a third filled with pillows for lounging. The Astérocabane, shaped to suggest an asteroid, offered activities once a child was inside; “The Cave” offered a promise of privacy. 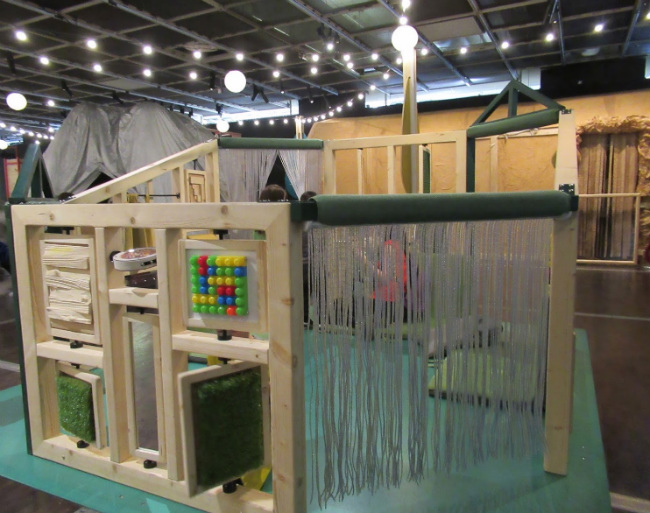 One child, in a creative attempt to ratchet down his energy from the human and physical stimulation that surrounded him, gravitated to the book cabin, constructed from planks and blocks that were decorated with book covers. Once inside “La Liseuse”, the Reading Nook, he found a small shelf, crawled onto it, and curled up into a ball. He admonished anyone who questioned his activities with a gesture that said, “Shhhh. I’m hiding.” He had intuitively migrated to books, which I imagined might be his retreat of choice, and there located his own perfect comfort zone.

Les Cabanes remains at Cité des Sciences et de l’Industrie until January 5, 2020. Reserve a time-slot for your young child and for you as their companion and enjoy opportunities to observe, learn, and experience. 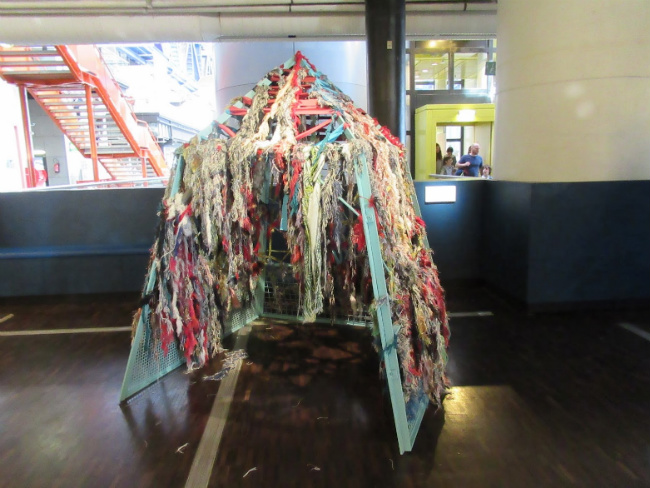