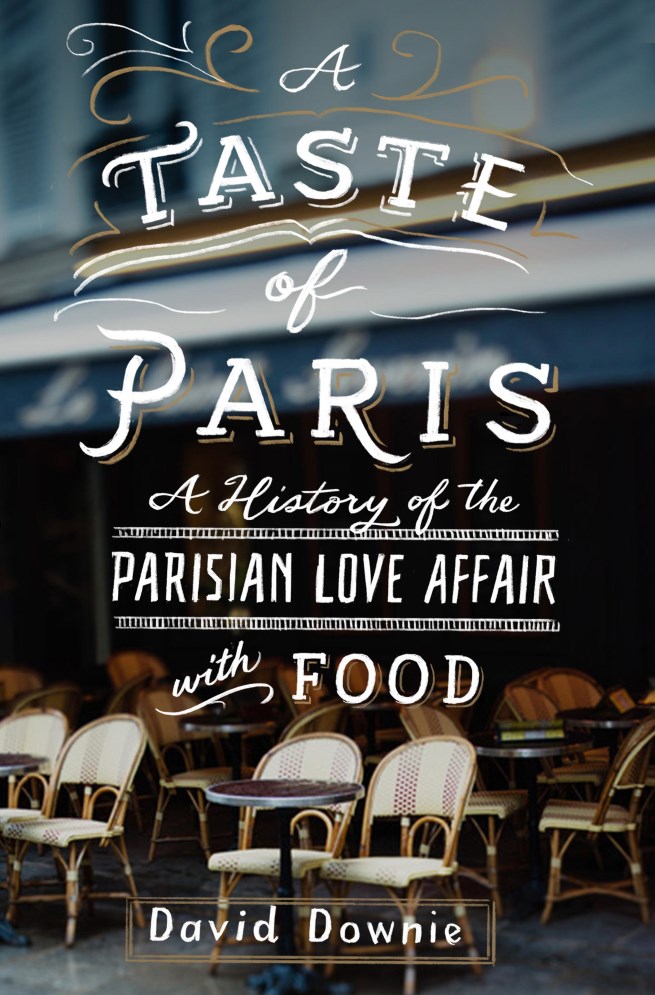 David Downie is a native San Franciscan who moved to Paris in the mid-1980s and now divides his time between France and Italy. He is the author of over a dozen nonfiction books, two thrillers, and two apps: one about the history of Paris (from 8000 BC to the present), and another about the food and wine of Rome. His travel, food and arts features have appeared in many print magazines and newspapers, and on dozens of websites, and his nonfiction works include several critically acclaimed books about Paris and France, among them Paris, Paris: Journey into the City of Light; Paris to the Pyrenees; and A Passion for Paris: Romance and Romanticism in the City of Light.

Downie recently took the time to answer Janet Hulstrand’s questions about his next book, A Taste of Paris: A History of the Parisian Love Affair with Food, which will be released in September, in this interview for Bonjour Paris.

JH: What made you decide to write A Taste of Paris? Was there a sudden inspiration of some kind, or was it a more organic process?

DD: It was a combo platter, so to speak: for decades I have thought of Paris in terms of its culinary cityscape but I had never realized that the cityscape of food and wine corresponded to an astonishing degree with the history of the city, and specifically the history of French food and wine. While researching and writing A Passion for Paris, my earlier book about Romanticism and romance in the City of Light, I stumbled upon lots of food-related material. One day a light clicked on. I saw Paris as a giant banquet table, the topography, cityscape, history and food all beautifully organized, spiraling outward from the Ile de la Cité, the core of Paris. It was very exciting. I must have had lots to drink—and it was not wine from Paris.

JH: The subtitle of A Taste of Paris is “A History of the Parisian Love Affair with Food.” Toward the beginning of the book you say that although the recipes in Taillevent’s 14th century cookbook might be regarded as marking the beginning of the Parisian love affair with food, you continue by saying that you actually believe that started “when Paris was named Lutetia.” Can you explain what you mean by that? When did the French, or at least the Parisian obsession, or passion for food begin? And why then?

DD: An excellent question, and it took me the entire book to answer it, so I won’t be able to manage that here. What I can say is, the Ancient Romans, who arrived in 53 or 52 BC (depending on which sources you consult), conquering the ragtag army defending the settlement known as Lutetia Parisiorum, brought with them their often excessive love of food and wine. The Gallic tribe they ousted or subsumed—the Parisii, hence the ancient and current name of the city—were not gourmets by any measure. The Roman passion for gourmandizing and guzzling was adopted and adapted, and lived on despite “barbarian” invasions, changes of dynasty, plague, famine, war, rioting, urban rebuilding, floods, and so forth. It underlies the Parisian love for entertaining. Think of it as the operating system buried beneath all those programs and apps on your laptop or smartphone.

JH: You identify Jean Antheleme Brillat-Savarin’s The Physiology of Taste, which was published in 1825, as “the cornerstone of France’s intellectual appreciation of food and wine.” What was it that Brillat-Savarin introduced, or perhaps just formalized, that had this effect?

DD: Brillat-Savarin was a food-loving dilettante with a solid grounding in science, specifically medical science, and though he was a magistrate his real passion was food and, to a lesser degree, wine. (Baudelaire really beat him up over his supposed lack of enthusiasm for wine, but Baudelaire was largely off the mark). Brillat-Savarin took the scientific notions of his day, applied them to appetite, digestion, health, happiness and so forth, and borrowed a great deal about food and entertaining from the other great food theorist of the day, Grimod de la Reynière. The thing about Brillat-Savarin is he was a natural-born writer and storyteller, an enthusiast, and he was also positive, whereas Grimod de la Reynière was corrosive, ironic, sardonic and possibly (probably) devoted as much energy to poking fun at self-styled gourmets as he did elucidating the rules of good eating, drinking and entertaining. Brillat-Savarin was a stylist. That’s why non-French audiences might possibly be less overwhelmed by his work. But for the French, because he intellectualized science and gourmet dining, and did so with flair, he is God.

JH: I’ve heard some pretty heated debates about the difference in meaning between the words “gourmet” and “gourmand” in French. Can you settle this debate for me and for readers of BP? What is the difference between the two? And also, while we’re on the subject–kind of–what is your opinion of the word “foodie,” in English?

DD: I’m afraid I can’t settle the debate because it is an open question. Put it this way, the word “gourmet” is used much more often in America and the U.K. than in France, where it is replaced by “gastronome” or “gastronomic” (gastronomique). Gourmet is pretentious. Followers of persnickety food theorists might use it. But the French are pretty relaxed about all this. It’s Americans who get heat up about the difference. A gourmand in any case is someone who loves food, possibly immoderately, meaning he or she likes lots of it. You might joke in France and specify that you’re gourmand or gourmande if you want to fess up to wanting a second helping, or prefer the chocolate cake to the light, fruit-based dessert. As to “foodie,” there is only one term that makes me more nauseous and that is “foodista,” which derives from a perverse bastardization of “fashionista” and whose permutations have also given us “barista.” Since I loathe fashion, I feel free to truly dislike fashionistas, foodistas, and the kind of food, wine and hangouts they favor. I am absolutely unapologetically anti-Bobo. Authenticity and simplicity are the two key concepts for me in most things, and always in food and wine.

JH: What is your overall feeling about the current state of French cuisine?

DD: Oh dear, one really needs to read the book for an answer to that. I would say that French cuisine is embattled, but that some hardworking and honest chefs and cooks still produce it, some very well. The battle involves multiple fronts. One of them is the karaoke cuisine phenomenon I describe, also known, to me, as “cuisine terrible.” This is the crap served to tourists. It’s premade, prefab stuff reheated by schlock operators, and it’s a pernicious problem not only in Paris but also in New York and Sydney and London and so forth. The other battlefront in Paris is cuisine d’auteur as I call it. Film d’auteur can be great. Cuisine d’auteur is often experimental and outlandish. It’s the latest incarnation of Nouvelle and other types of “creative” cuisine. They are, by and large, flashes in the pan, or the frying pan, perhaps.

JH: What is one of the most interesting, or perhaps most surprising, things you learned in the course of researching A Taste of Paris?

DD: The most surprising thing without a doubt was just how indebted French cooking, French entertaining, French pastry-making and most other culinary things that we think of as “French” are to Italy. This has been the case from the beginning, from Ancient Roman times. Again in the Renaissance the Italian influence was huge. And it continued. It still continues. And as to the most popular thing to eat in France these days, you know as well as I do that it is none other than… pizza! (Followed closely by hamburgers).

JH: You mention a number of your favorite restaurants in Paris in this book.  I know it depends a lot on the occasion, the budget, one’s mood, and various other things, but do you have one overall-favorite restaurant? Or is there a particular kind of restaurant you like best? What is most important to you, what do you think makes for a good eating-out experience?

DD: This is another question requiring a book-length response. I go back to what I said earlier: authenticity and simplicity are key. My favorite places are bistros, brasseries and cafés. Having had the privilege of being able to experience many grandes tables with multiple Michelin stars I can honestly say that the fussy, stylized, artistically arranged tidbit mode of eating, requiring many hours and many changes of outsized plates, each daubed with edible color coding and graced with ethereal morsels, is not for me, not anymore. I now buy the Michelin guide to know where not to go. But you really must read my book to understand why. 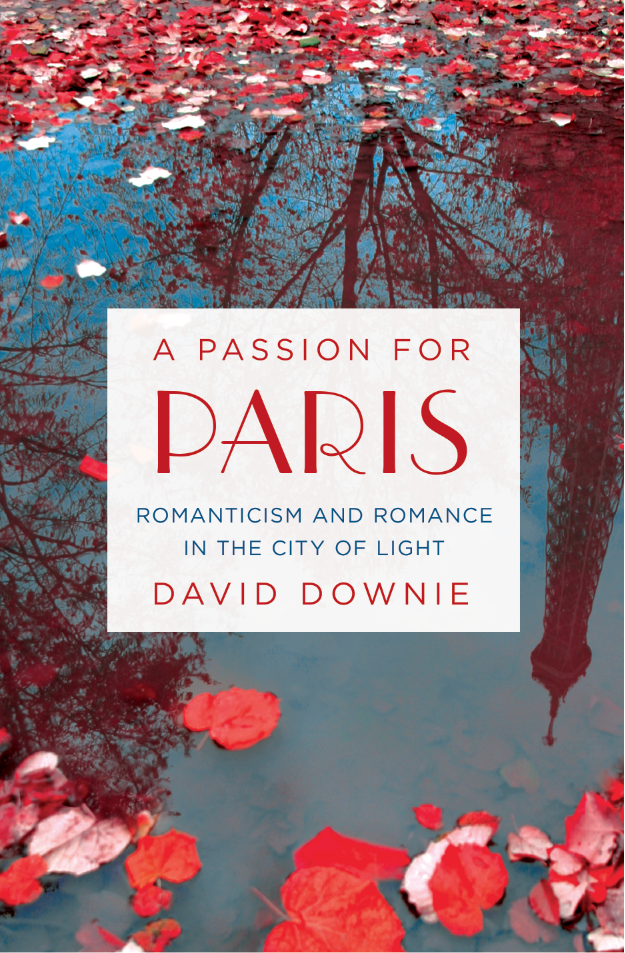 JH: What tips do you have for people visiting Paris, about how to find good places to eat?

DD: Well, I’ve just given one above. If you’re into foodista and fashionista food you know where to go—the trendy spots rewarded by all the big guidebooks—I worked for lots of magazines and guidebooks, by the way, so this is an insider’s take—and the trendy foodie websites. Otherwise, in my book you’ll find plenty of places for retrograde types who like real food served in relatively quiet surroundings, food made from scratch, for instance, and served hot, instead of coming off an assembly line of artistic apprentice sorcerers. Try this: find a bakery or cheese shop or gourmet specialty food shop you really like, and ask the owner or the manager where he or she likes to eat. And if you hear the peeps of a microwave oven coming out of the kitchen of your selected restaurant, bail out while you can.

JH: What are you working on now? What can your fans look forward to reading next?

DD: Right now I’m working on a novel. But I will say no more for fear of jinxing it. Merci, et bon appétit!

Our 5 Favorite Rooftop Bars in Paris