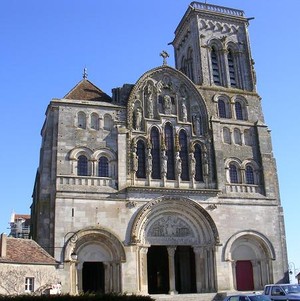 The basilica of Vézelay, Yonne

Where it all began

The history of Vézelay goes back to Neolithic times.  Once called Mount Scorpion because, seen from above, the town looks like a scorpion with seven rings and a dart, the village actually began in the nearby village of St Père at a place called les Fontaines Salées (The Salted Fountains).  Here in the Yonne, just as elsewhere in France, the first traces of Celtic culture date back to 500 BC.  Like the rest of their empire at that time, the local “Gaulois” peoples thrived in autarky until they were incorporated into the Roman Empire in 200 BC.  The Fountains’ sandy soil allowed its wells to filter and collect salt by evaporation, but the water in the Salées fountains was also heavy in mineral content and radioactive in elements such as nitrogen, helium and radon. First a temple, then, like Cluny in Paris, roman baths, for centuries the site attracted thousands of visitors of both sexes often from great distances, much like thermal baths still do all over Europe today. 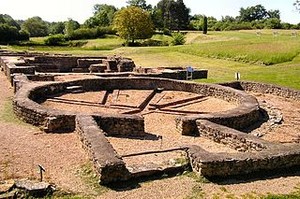 During the “dark ages” that followed the fall of the Roman Empire, several hundred years of invasion and violent struggles for power between Nordic clans and sibling rivalry forced local peasants to survive as best they could.  As time passed, the Catholic Church began building high walled monasteries and farms to protect the populations from famine, violence and pillage.

The birth of Vézelay

In penitence for betraying the king several times during these feuds, the Count Girart de Roussillon and his wife Berthe established a monastery of women monks in St Père in the 9th century, but because the women were unable to fend off the invaders, they were quickly replaced by their male Benedictine counterparts.  Even then, the Vikings invaded the area, sacked the monastery and forced the monks to build a new monastery at the top of the hill where the Basilica stands today.

Vézelay lies as a gateway to the Morvan mountain range

It was from the steps of the Basilica in Vézelay that Bernard de Clairvaux, the most influential of 10th century Benedictine monks in France, convinced the throng to defend the Holy Land and thus launched the second Crusade in 1146. When Saladin, the Sultan of Egypt, captured Jerusalem it was again at the Vézelay Basilica in 1187 that Britain’s king, Richard the Lionhearted, met the French king, Philippe Auguste and the two set off together at the head of the third crusade.  For many long centuries to follow and up to the French Revolution in 1789, Vézelay remained a Benedictine monastery and highly popular place of pilgrimage.

Heads I win, “tales” you lose

Remembering the importance of relics, such as the bones of saints to which pilgrims attributed miracles, a fierce rivalry sprang up in the 13th century between two villages, Saint-Maxime-la -Sainte-Baume in the south of France and Vézelay in the north.  According to legend, Mary Magdalene   had accosted on the shores of southern France.  Her relics were said to have be deposited at Saint-Maxime, but transferred in 882 by a monk named Badilon to Vézelay to “assure their safe keeping”.  Saint-Maxime claimed, and still claims, to posses the relics of both Mary Magdalene and of Saint Sidonia.

An excavation of the mausoleum in the town’s monastery, ordered by the future king Charles II in 1279, convinced the Pope to recognize the remains as authentic.  Nonetheless, Vézelay also continues to also claim its relics are those of Mary Magdalene.  Whatever the facts, one thing is sure, marketing helped even in the 11th-century and Vézelay became both an affluent and an inescapable starting point for the St James trail. 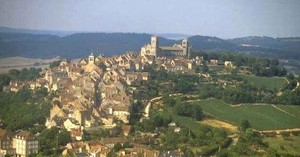 Vézelay, the town rises like a scorpion above the Cure Valley

For a short time during the religious wars at the end of the Middle Ages, Vézelay became a protestant stronghold.  The population diminished and the basilica nearly disappeared in the 19th century, but was finally renovated.  After the war in 1945 it once again became a monastery occupied by Benedictine monks until 1953.  They were replaced in turn by Franciscans until 1993.  The Monastic Fraternity of Jerusalem currently holds the religious rituals.

With less than 500 inhabitants, the two steep streets through the town lead up to the Basilica which is open to visitors all year from dawn to dusk.  The village boasts numerous small shops, two houses cum museums once belonging to author Romain Rolland and to poet Jules Roy, several gourmet restaurants, hotels, small cafés and a vast promontory overlooking the fertile Cure valley.  The local festivities around Mary Magdalene are held each year on July 22nd and a music festival each summer in August.  If you’re driving to Lyon, the detour is certainly worthwhile and a skip down through the Morvan’s deeply wooded region full of mountain and lake a memorable experience.  Campgrounds abound, but there is always a feeling of being outside of the tourist realm.

As for the Fontaines Salées, a tax on salt created in the 12th and 13th century put an end to the extraction.  Some illegal selling went on among locals, but it was limited since getting caught could have been punishable by death.  In the 15th century the monks created a “salt attic” to store the salt and collect their own tax. Just in case you didn’t know, a worker could be paid his wages in salt at that time, hence the origin of our English word “salary”!

Photo of the Basilica at Wikipédia communs
Photos of the basilica and of the town
Sources :  Histoire pour tous
Vézelay, Wikipédia
Architecture religieux
Medieval times and castles
Mydas