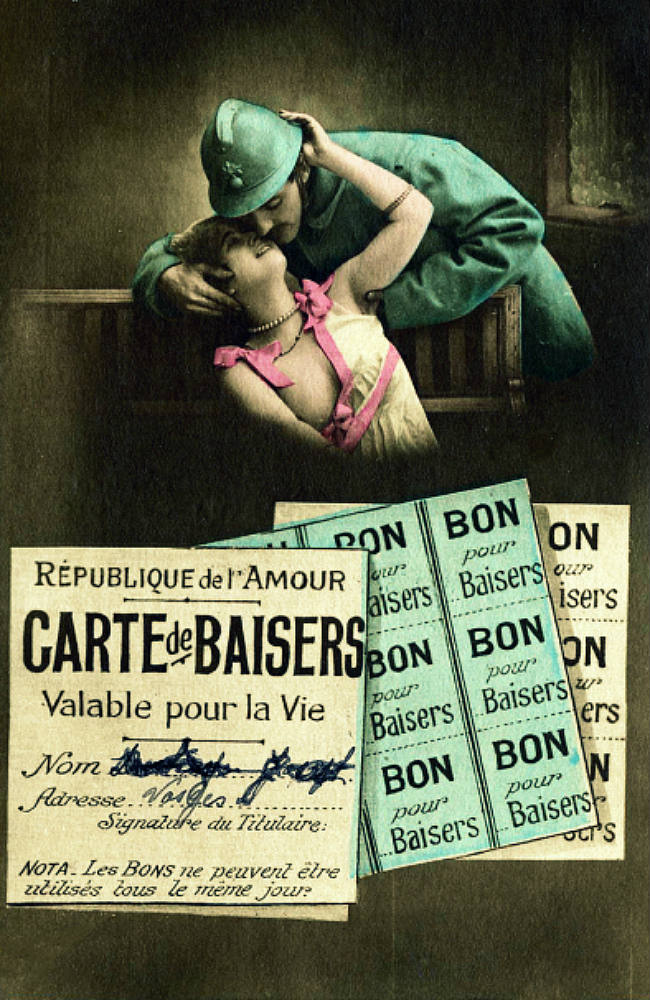 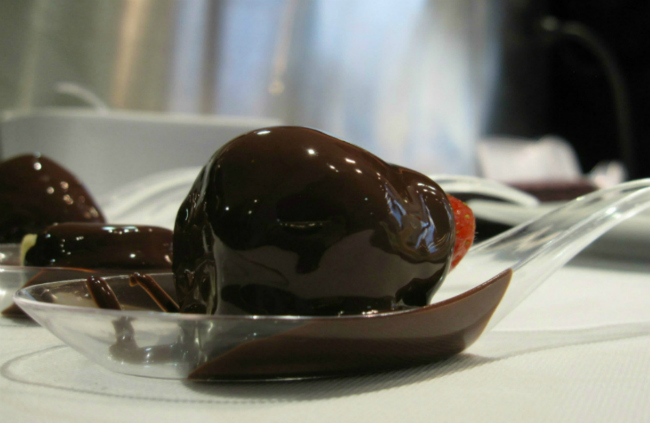 In celebration of strawberries, the full moon, and the summer solstice, here’s my all-time favorite love letter by poet Apollinaire to his sweetheart Madeleine. (Chocolate-covered strawberry photo: Theadora Brack)

Now, Voyager! In celebration of strawberries, the full moon, and the summer solstice, let’s embrace all celestial affairs to remember with a reading of my all-time favorite love letter, by poet and surrealist Guillaume Apollinaire to his sweetheart, Madeleine Pagès. Written in 1915, while he was enlisted in the French army’s 38th Regiment of Field Artillery, his tender gushing still adds pep to this hobble skirt-clad romantic’s step. 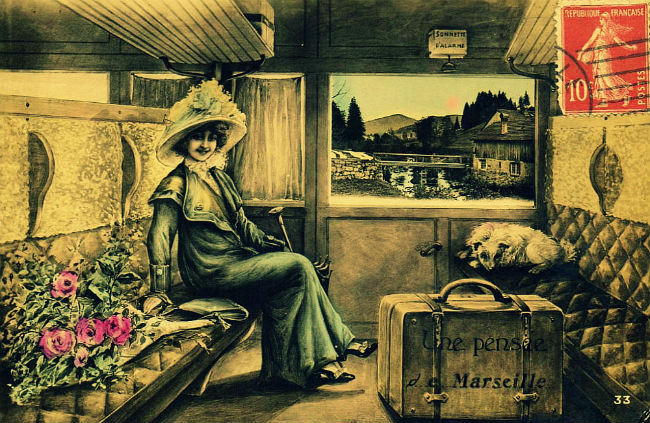 Like the Celine and Jesse characters in Richard Linklater’s 1995 “Before Sunrise” movie, the pair met for the first time on a train
(Sweetheart Postcard: T. Brack’s archives)

Madeleine Pagès was his muse. A cartridge casing served as his inkwell.

Like the Celine and Jesse characters in Richard Linklater’s 1995 Before Sunrise movie, the pair met for the first time on a train. Later in ’52, Madeleine reminisced about the trip from Nice to Marseille:

“Whenever I spoke to my traveling companion, I smiled unabashedly now, and each time I looked up, I found his gaze fixed on me. His eyes were brown, like his hair, his features were truly striking—he was distinctly more handsome without his kepi. But it was ten o’clock! Not without a deep blush, I offered him one of my extra sandwiches, and he accepted amiably.” 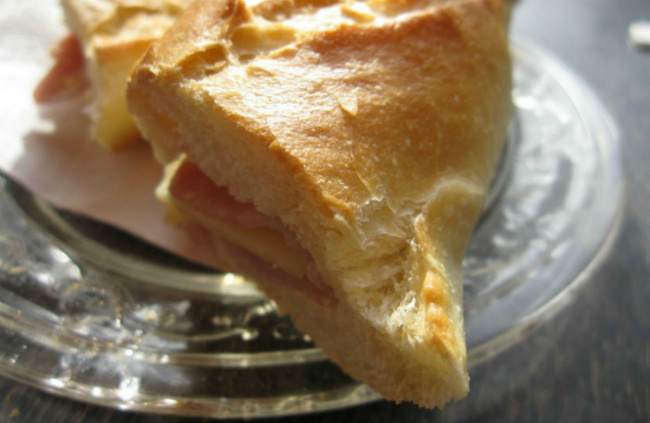 Not without a deep blush, Madeleine offered Apollinaire one of her extra sandwiches, and he accepted amiably
(Photo: Theadora Brack)

While serving in uniform in Champagne during the Premier Guerre Mondial (World War One), Apollinaire showered both Madeleine and his fellow artists with daily dispatches from the front: “Just 8 days ago we experienced very heavy bombardment around our batteries with large calibre-shells. The experience is one that may be had nowhere else. This is why I in no way regret coming here. At the moment the strawberries are coming out and blushing from modesty at finding themselves amid so many soldiers.” 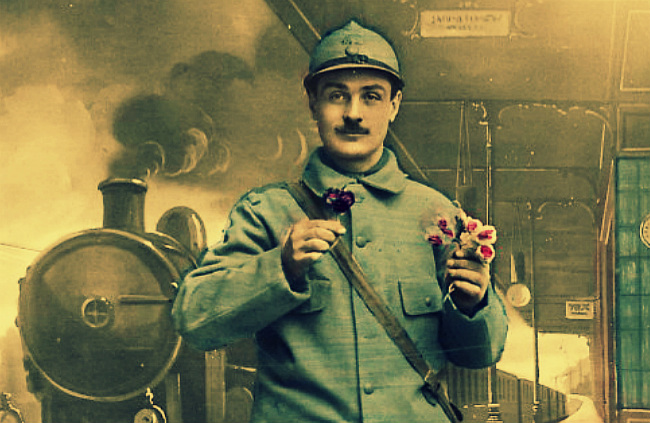 Oh, say can you see?

Often by moonlight the prolific poet penned his calligrammes and signature “fireworks in steel.” Way ahead of the Dada hairpin curve, Apollinaire’s sensuous, erotically charged poèmes simultanés are still almighty hot to the touch, just bursting with joyous desire. You can almost feel the loud boom of cognitive collision in his free-form associations. Here’s a snippet from his “Flare” poem—dedicated to Madeleine, a.k.a. his “little fairy.”

My thought finds you out and your thought meets mine

Your breasts are the only bombshells I love

Your memory is the searchlight focusing the night for us

Juggling and juxtaposing perceptions with memories, he transforms the battlefield horrors surrounding him into knockout surreal beauties that still snap, crackle, and stop this Jolie Rousse’s heart. 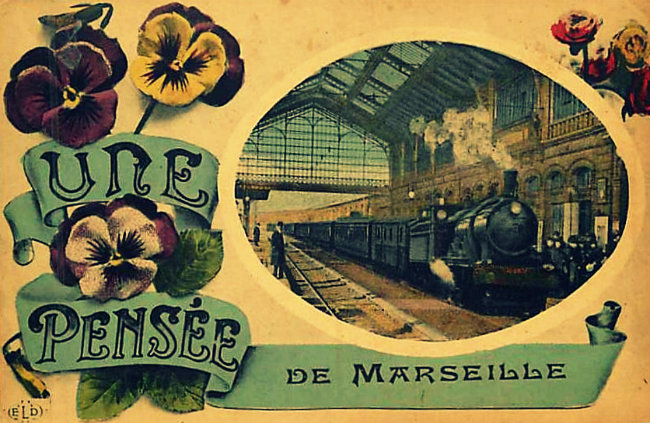 Apollinaire also had a softer side. In September 1915, he hunkered in the trenches to send his thoughts to dearest Madeleine. (Sweetheart Postcard: T. Brack’s archives)

Apollinaire also had a softer side. In September 1915, he hunkered in the trenches to send his thoughts to dearest Madeleine:

The contents of the parcels were exquisite. First of all I ate the fruit, the chocolate, and the honey bonbon still bearing the divine traces of your teeth, and this marvelous kind of kiss of your invention proved to me once and for all that you are a true Vendéenne.

I was thrown into near spasms of voluptuousness by this kiss of such a new sort, so subtle, so delicate, so exquisite in its savagery, so Madeleine. I do adore you, you know. I could never have thought up such a thing or imagined such a perfect form of communication from afar between two lovers.

Your dear mouth, your tongue, your teeth, your delicious saliva—all mine your absence notwithstanding, my Madeleine, dearest peerless mistress! And to think that I was almost forgetting to thank you. I am well and truly obliged to you my dearest little wife.

Now that was a letter, from back when even an ordinary poilu still knew how to warm a sweetheart’s heart. I thank Donald Nicholson-Smith for the translation. His new 2010 edition of Letters to Madeleine (edited by Laurence Campa) is a page-turner on fire. I highly recommend adding the sizzling three-pound book to your reading list. 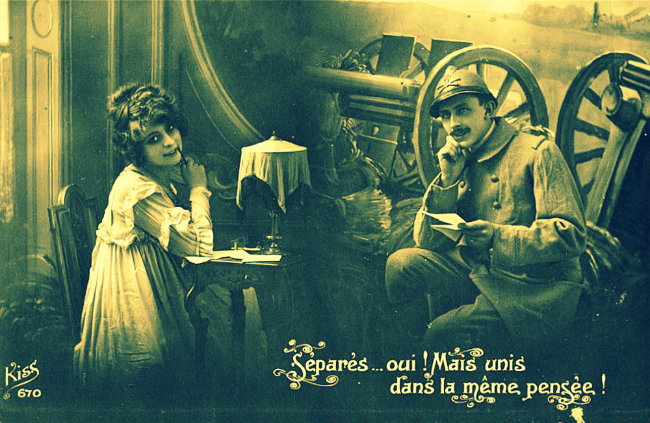 Rekindle the fire with all those memories! After all, the journey is almost always more important than the destination. (Sweetheart Postcard: T. Brack’s archives)

And in the end

As Edith Piaf so memorably put it: “Non, je ne regrette rien. Avec mes souvenirs, j’ai allumé le feu!” And she’s right, you know. Regrets are a waste of time. Better to rekindle the fire with all those memories—all alone or not so alone in the moonlight. After all, the journey is almost always more important than the destination.

Hooked and need another fix? I’m with you, step by step. Let’s now hop on over to art historian Beth Gersh-Nešić’s riveting review of the “Apollinaire: Vision of the Poet” exhibition at the Musée de l’Orangerie. The show runs through the 18th of July.

Previous Article Weekend Trips from Paris: Things to Do in Champagne This Summer
Next Article Don’t Miss: Henri Rousseau and Paula Modersohn-Becker Exhibits in Paris