An unexpected bonus of Haussmann’s grand plan to modernize Paris with grands boulevards and wide streets were the little alleyways that were left behind, untouched in the reconstruction of Paris in the 19th century. Each retain their own piece of history immediately evident in the old buildings, cobbled lanes and quirky facades, and each take you back to a Paris of the past often no longer immediately visible. Montmartre was spared modernization as were great swathes from Boulevard Saint-Germain down to the Seine and it is these places with their narrow streets that attract and charm both tourists and residents of Paris alike. One such passageway runs from Boulevard Saint-Germain to rue Saint-André-des-Arts. It’s called La Cour du Commerce-Saint-André.

Indeed if you wanted to imagine an ancient Parisian walkway, cobbled of course, lined with little shops and restaurants, half covered with a glass canopy and simply bursting with history and bizarre facts, then La Cour du Commerce-Saint-André is your man. (Or woman!)

The cobbles were part of the fortified walls of Paris built by Philip Augustus between 1190 and 1215 so not only are you looking at history but you’re also walking on it.

Since 1776 this little rue has witnessed more than its share of fascinating history. One of its famous inhabitants was Georges Jacques Danton, one of the leaders of the French Revolution. Unfortunately his house, number 1, no longer exists, a victim of Haussmann’s new Boulevard Saint-Germain.

The equally famous (if not more so) was Jean-Paul Marat, who lived at number 8. Marat published L’Ami du Peuple (Friend of the People) from his printing press in the premises of number 8. Another radical, like Danton, Marat was a leading figure in the French Revolution. A man of science, a journalist, and a political theorist, Marat preferred to be known as a ‘Man of the People’. Unlike so many other victims of this bloody period in French history, Marat did not die under the guillotine, but infamously by the hand of Charlotte Corday on July 13th, 1793. Corday, who violently opposed Marat’s teachings, stabbed him to death as he lay in his bath. Marat had moved many times to evade capture, and a stint hiding in the Paris sewers had left him with a skin disease only ameliorated by spending hours submerged in water. It was there, lying helpless, with a board to work on covering most of his body, that Corday plunged a dagger into his neck. Corday however, was not spared the guillotine and died soon after murdering Marat.

The macabre irony of the guillotine (and Danton’s fate) was its instigator and his neighbor, Joseph Guillotine, lived at number 9 Cours du Commerce. It was in the cellar of number 9 that Joseph Guillotine began experimenting with the device that would be responsible for thousands of deaths during the French Revolution and beyond– until as late at 1977. (The guillotine was actually designed and invented by Antoine Louis as a humane method of killing, and was originally known as the Louisette.) Tobias Schmidt, a German engineer, and Joseph Guillotine worked together on its refinement, practicing first on hay bales and then on sheep, the first living victims whose heads were lopped off in a practice run. Corpses from the morgue followed. Presumably the other inhabitants of Cours du Commerce had more than an inkling of what was happening in their little street but could not imagine how this device would come to symbolize the worst horrors of the French Revolution. 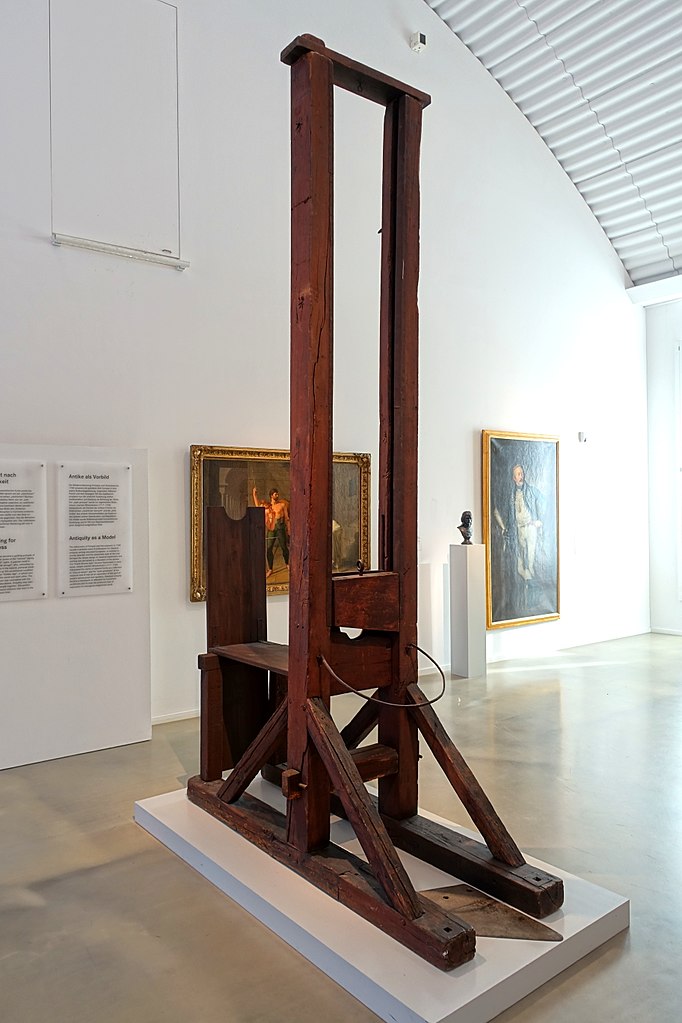 But it is Le Procope, running through from Rue de L’Ancienne Comédie to the Cours du Commerce, that undeniably boasts the most influential figures in French history entering through its doors.

Le Procope is a truly unique establishment with a solid gold pedigree. Even back in 1686, Le Procope was unique. The first true café in France, it was also a salon, a luxurious establishment that welcomed writers and thinkers, where the coffee and hot chocolate were legend. Le Procope was opened by an Italian immigrant, Francesco Procopio dei Coltelli, who could not have imagined that today, Le Procope, after a refurbishment à la 18th century, is still a thing of beauty attracting clients to experience a slice of history with their coffee or meal.

Originally named Café Mange Mereds, it was blessed with a stroke of luck when in 1689, La Comédie-Française opened its doors across the street. Actors, writer, musicians, poets philosophers and revolutionaries adopted the café as their second home. The illustrious clientele over the years is a Who’s Who of famous, international, influential figures that include: Robespierre, Danton and Marat of course, Rousseau, Voltaire (who reputedly drank 40 cups of coffee a day), Léon Gambetta, Anatole France, Balzac, Georges Sand, Benjamin Franklin, Thomas Jefferson, Oscar Wilde, and a young Napoleon Bonaparte who, when he could not afford to pay for his drinks, left his hat. This is now displayed in a glass case in the foyer. 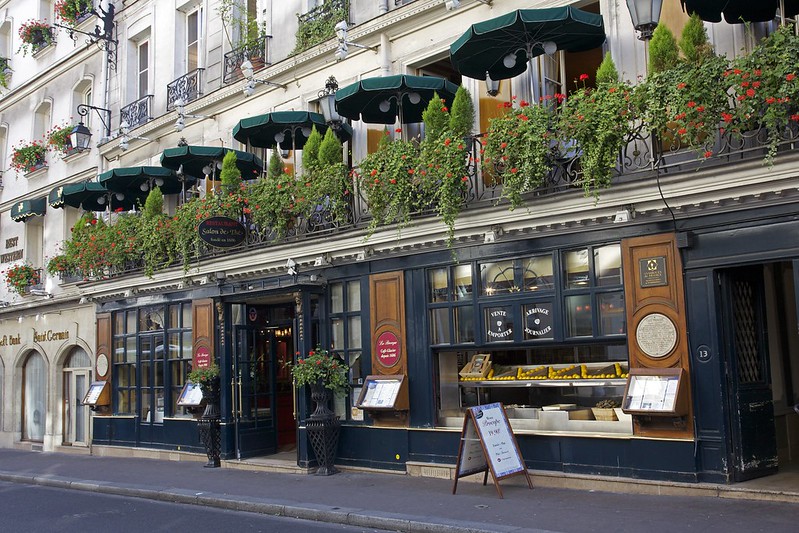 From Le Relais Odéon’s back terrace, La Cour du Commerce-Saint-André runs from 59 rue Saint-André-des-Arts to 21 rue de l’Ancienne-Comédie and 130, Boulevard Saint-Germain, 120 meters long and 3.5 meters wide. Its small shops include an exclusive stationary, boutiques, an épicerie, restaurants that spill outside, and a wonderful chocolate shop, Un Dimanche à Paris, whose hot chocolate will challenge any diet to the death, and win.

La Cour du Commerce-Saint-André is a world away from hectic Boulevard Saint-Germain, but a mere step can take you into another world, steeped in history but blessed with establishments that only enhance its remarkable past.