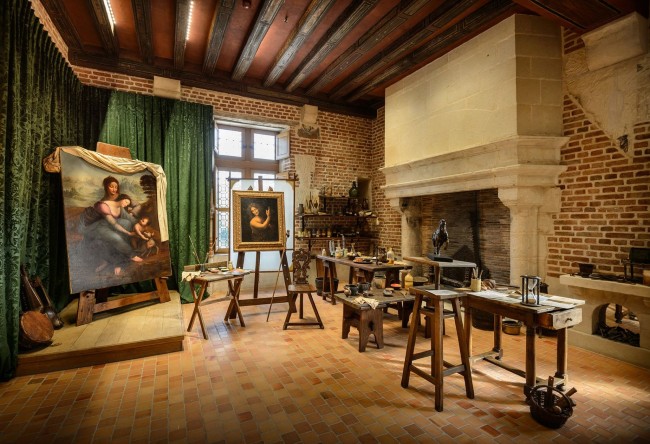 The Leonardo da Vinci exhibition at the Louvre might’ve closed last month, but that doesn’t mean your journey in his footsteps needs to end. A visit to his former home, Château du Clos Lucé where he spent the last three years of his life at the invitation of the art-addicted King, is available for exploration at any time. An easy day trip from Paris, this picturesque corner of the Loire Valley is less than two hours from Gare Montparnasse. 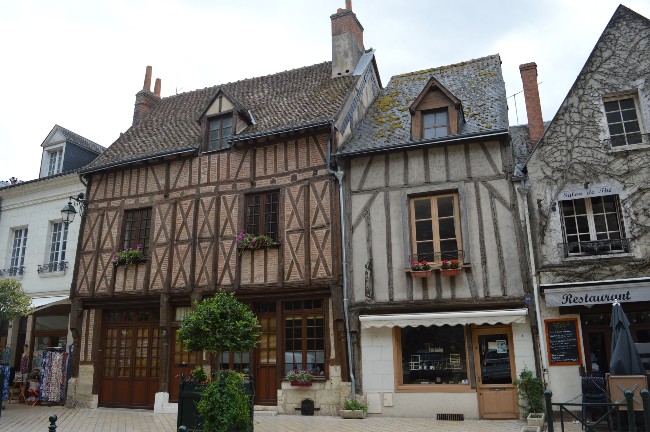 Skip the scenario of potentially cursing your GPS and hurling it out of the window; the best way to arrive is almost certainly by train. Not only is it the quickest way to reach the chateau, but the leisurely walk from Amboise station reveals stunning panoramas of the river too. The town boasts troglodyte cave houses once typical of this region, timber buildings crafted from centuries-old wood, plus characterful modern residences with brightly colored boxes of flowers decorating their sills. Peek inside while strolling along the road to the chateau for small visual pleasures such as vintage lace curtains embroidered with birds. So much is missed when zooming past in a car. 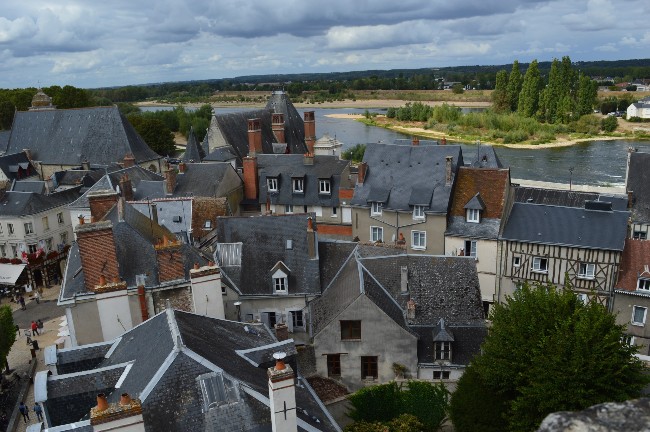 The view over the town from Chateau d’Amboise. Photo: Chloe Govan

The Château du Clos Lucé is just a few minutes by foot from the Chateau d’Amboise, the royal residence where Leonardo da Vinci was buried, so if starting early, a day trip can easily combine both while allowing you to be back in Paris by dinnertime. There was once a clandestine underground passageway used by Leonardo da Vinci himself, which allowed discreet and direct access between the two, by special arrangement with the King. Those without Leonardo da Vinci’s celebrity status, however, were obliged to take the public route above ground, as visitors do today. 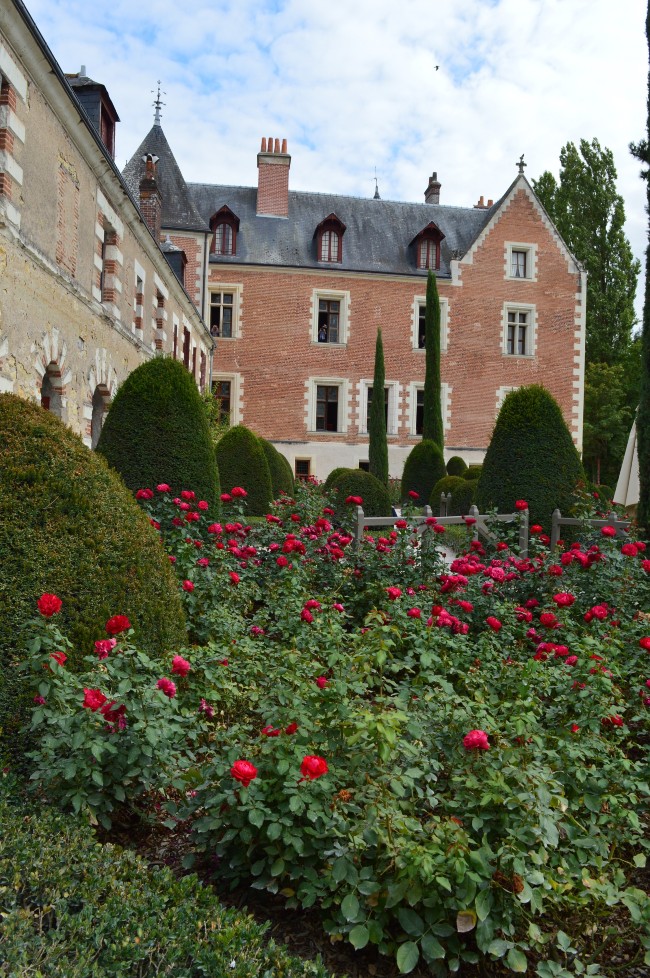 Here, shrouded in the Clos Lucé, framed by the leafy trees of the valley, lie the secrets of Leonardo da Vinci’s final years. He had made the trip over the Alps from his native Italy by mule, clutching a satchel containing three of his most famous paintings – St John the Baptist, The Virgin and the Child and of course the Mona Lisa. His arduous journey was at the personal invitation of a very insistent King Francis I, and he would soon become “premier painter, engineer and architect” to him. Leonardo da Vinci would work diligently on the legendary Chateau de Chambord, injecting it with the influence of the Italian Renaissance, and at one time — admittedly more frivolously — even designed a mechanical lion which would release a flurry of flowers at the King’s feet.

All of this ingenuity and invention took place at his base in the Clos Lucé, where he received a generous pension for his efforts. He and the King were inseparable, with the royal fondly referring to the artist as his “father” in spite of the fact that they hailed from rival nations and that Leonardo da Vinci’s past had been spent plotting military inventions to destroy the French. Seemingly oblivious to the fact that he had collaborated with his enemies on war machines with menacing names such as the “Assault Chariot” and the “Triple Fire Machine Gun”, (inspired by Stalin and his Soviet weaponry), King Francis was besotted – and he made no attempt to disguise it. Sounding at first like a platonic version of Romeo and Juliet, the passionate friendship between artist and King nevertheless did not end in tragedy. 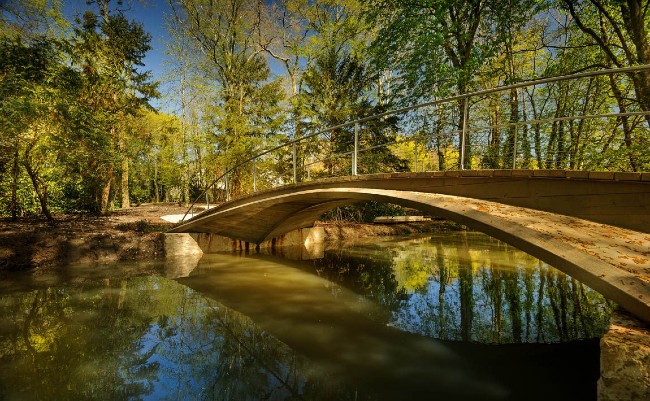 Perhaps it was his talents and skill for entertaining that had caused the King to overlook his controversial past. Either way, there is plenty of evidence within the Château du Clos Lucé of exactly why Leonardo da Vinci was seen as special. The interior boasts reconstructions of his workshops, where he spent countless hours indulging in creative pursuits, while the basement contains 3D animations and models of his inventions. Expect extra quirks such as taxidermy bats, skulls and a flying machine suspended from the ceiling, honoring Leonardo da Vinci’s long-time obsession with birds, and how to replicate their flight. Then there are the insights into his bloodthirsty imagination, courtesy of the prototype for a “Military Armored Tank” surrounded on all sides by guns, which he predicted would “take the place of the elephants”. He added that fighters could “hold bellows in them to spread terror among the enemy’s horses”. 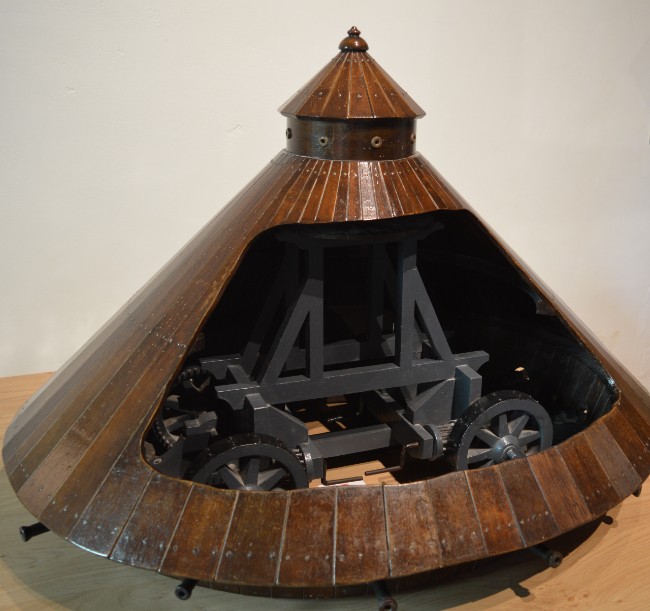 On a more personal note, it’s also possible to see his kitchen and on-site chapel, containing frescoes by his disciples. They have been painstakingly repainted with the same pigments used in the Renaissance era to aid authenticity. Then there is his bedchamber, with its distinctive red velvety furnishings. Amusingly, there is sometimes a resident cat lurking here who swans in and out as he pleases and regards Leonardo da Vinci’s original bed not as a place of history but as little more than a convenient place for a nap! 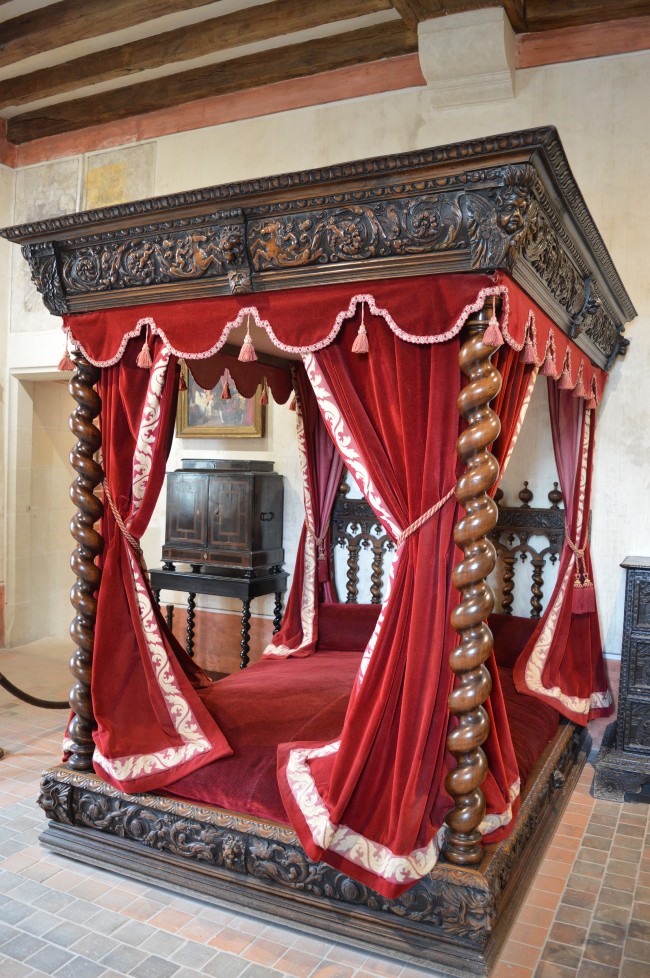 A word of warning: Top up your camera or phone fully before you arrive, lest you find yourself in the position I was in, crouching on the floor next to Leonardo’s bed and plugging my charger into the ancient, slightly dilapidated socket beside it. That said, the fact there is even a functional plug socket in a room last inhabited by Leonardo da Vinci just over 500 years ago is to be commended in itself.

For those who have time, a walk through the chateau’s expansive park at the end of the visit is unmissable. It is filled with authentically sized sculptures which bring to life some of Leonardo da Vinci’s most famous inventions. Visitors are invited to climb aboard his assault chariot, try out his multi-barreled gun – virtually, of course – and enjoy the bridges he designed. Meanwhile the gardens boast centuries-old pine trees and the seasonal so-called “Mona Lisa roses”. 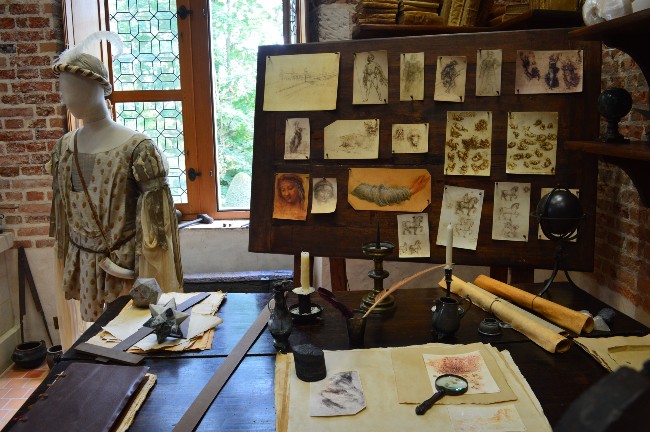 A trip here offers a compelling slice of history, including plenty of insights and memorabilia that it’s impossible to view anywhere else. After the visit, travelers can then head to the Chateau d’Amboise nearby. Notably the Patisserie Bigot on rue Nationale is barely a couple of minutes walk away from it, and its outdoor seating affords a view onto the town’s visually pleasing clock tower and archway beneath.

A visit to the chateau can provide a parallel between the life of the royals and that of Leonardo da Vinci nearby. It also boasts incredible panoramas of Amboise. While in the past the summit of the ramparts offered a perfect bird’s eye view of potential invaders, in today’s relatively trouble-free times, the focus might instead be on peering down at the town’s mouth-watering chocolate shops and biscuiterie shops below! Although not exactly what the King would have had in mind at the time, this aerial-style map of tasty snack shops could certainly help hungry visitors at a high vantage point to plan where to eat afterwards. 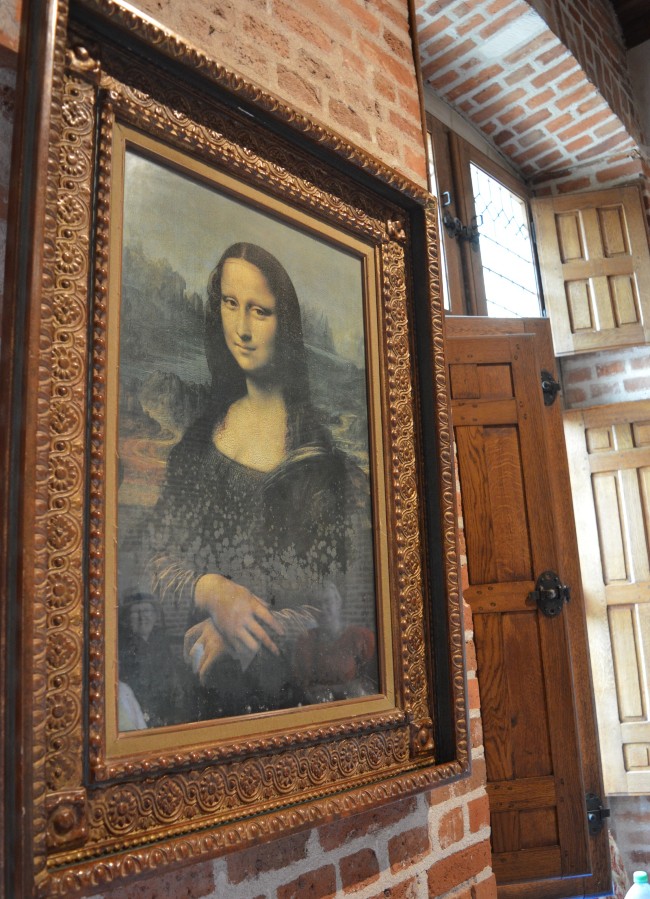 Highlights of any visit include an optional tour of the secret underground passageways below the chateau – to be booked in advance – and of course, for Leonardo da Vinci devotees, a visit to his tomb in the chapel. As the artist once famously prophesized, “A well-spent day brings happy sleep, so a life well spent brings happy death”. With that in mind, we can only hope that his final resting place in Amboise gave him exactly the peace and happiness of which he spoke. 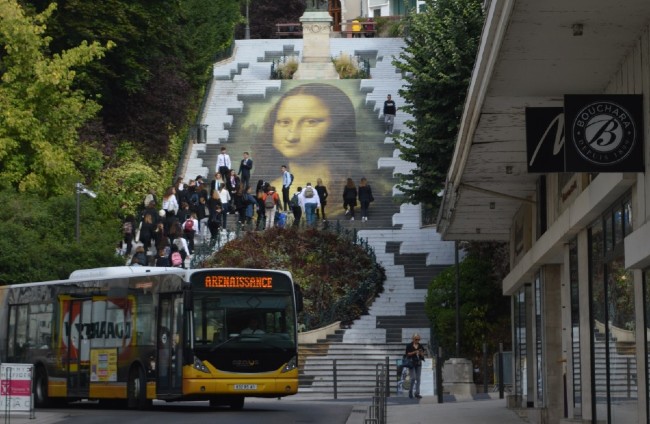 A bus advertising the 500 year anniversary of the Renaissance In the Loire Valley next to a Mona Lisa staircase in honor of Leonardo da Vinci. Photo: Chloe Govan