The Generous Genius of Gustave Moreau 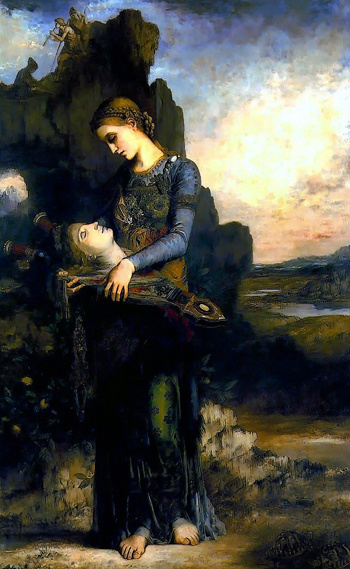 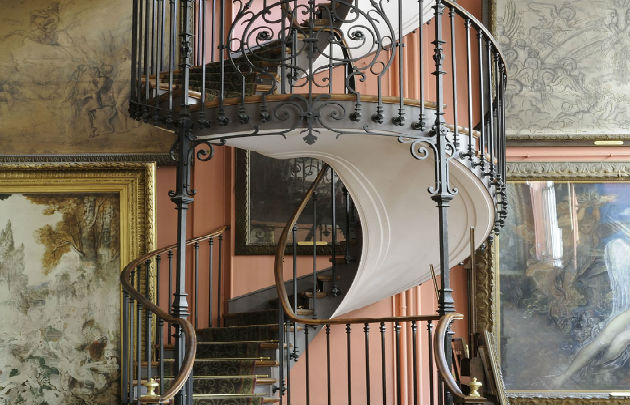 Long ago in Paris I made a pilgrimage to number 14 rue de La Rochefoucauld in the 9th arrondissement. (At this address, Musée Gustave Moreau is a museum dedicated to the painter.) I suspect, for I cannot remember, that to reach it I meandered along rue de la Trinité, for I am inclined to select street names with meaning knowing that a name in Paris indicates, generally, a significance along the way. The church along that way satisfied my whimsical manner of approaching something as serious as a pilgrimage. 14 rue de la Rochefoucauld was a large ordinary house. I was utterly unprepared for the inside.

Shall I first sketch a portrait of M. Moreau? He was born in 1826 into a cultivated family; his father, Louis, an architect and his mother, Pauline Desmoutier, the daughter of the former mayor of Douai. Their life was cultured and comfortable. Louis owned the Château de Bomy and though an upbringing there may well have seen a sensitive child drawn to the fantastical it doesn’t appear that young Gustave actually lived there. He was a fragile boy and was withdrawn from his boarding school at an early age to be schooled within the rich and splendid library of his family home. Spoiled with gifts of magnificent books of literature and art it was soon determined Art would be his Muse. 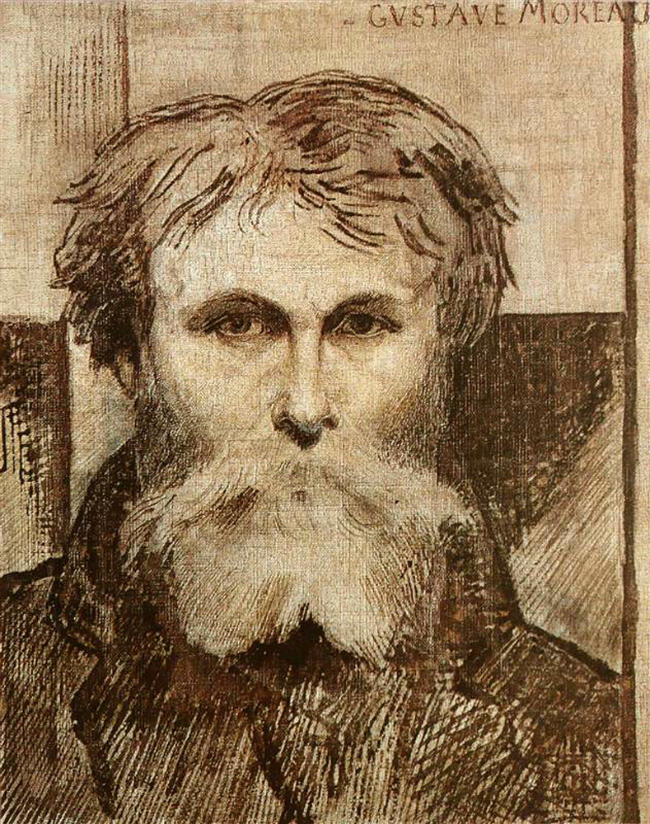 Around the age of 18 Gustave enrolled in the studio of François-Edouard Picot, at 36 rue de La Rochefoucauld. Picot was a member of the Académie des Beaux-Arts and had produced a number of official commissions, securing his reputation as a Neo-classical artist with a respected studio. Accepted by the Ecole des Beaux-Arts, Gustave thrived, yet two years later failed in two applications to the Académie itself. He withdrew from the Ecole. France was in turmoil then and in 1848 erupted in the short revolution which saw the establishment of the Second République. The government was repressive and conservative and was strongly resisted until the coup d’état of 1852 when the Second Empire was established. It was in this year that the family Moreau acquired the house at number 14. Gustave was to live there all his life. Although he was rejected from the Académie, the French government in 1853 commissioned Gustave to paint the vast Song of Songs, which it donated to the Musée des Beaux-Arts in Dijon. 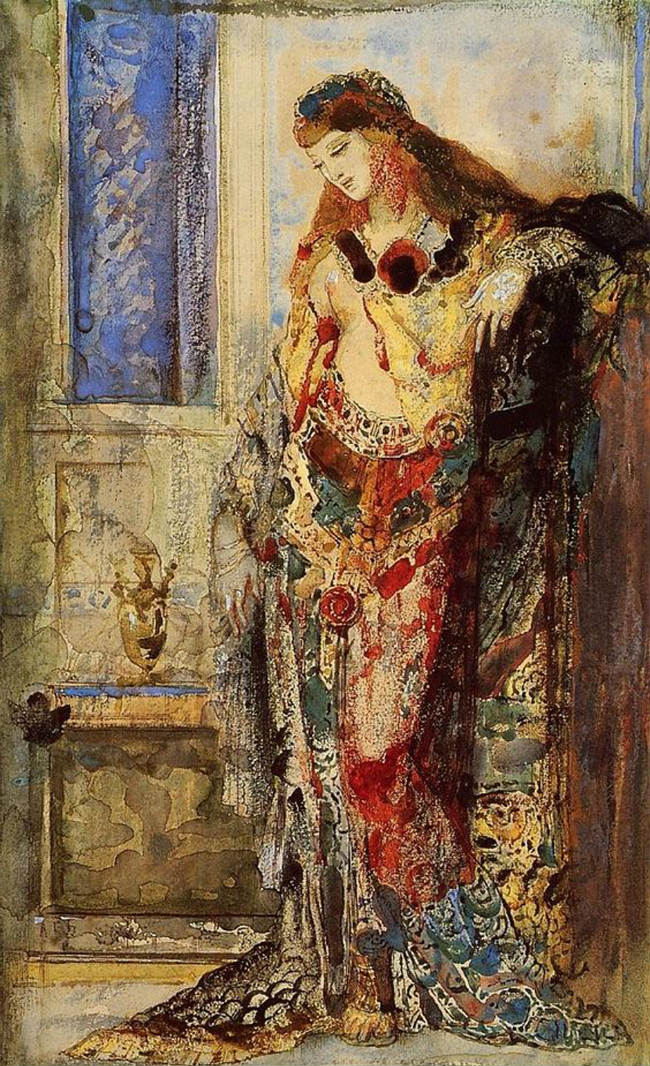 In 1857 Gustave left Paris for Rome with Frédéric Charlot de Courcy who later became an enamellist at Sèvres. It was a swift departure spurred on by discomforting circumstances but he was to remain in Rome, traveling around northern Italy, for two years, studying in the time-honored manner by copying over and over the great works found in churches and galleries, discerning through repetition and the refined training of his eye the nuance of line and color that marked the great works of the Italian Old Masters. Gustave was a highly cultured and driven man, passionate about his art; he kept these works all his life as his research tools, refusing many offers from admirers to buy them. He wrote to his friend Berchère: “Here I have found, in all their clarity and grandeur, the laws of art which I love … and far from overwhelming me, these great examples have powerfully transformed me.” Gustave’s so-called “sketches” were often immense and their influence on his later “phantasies” discernable. 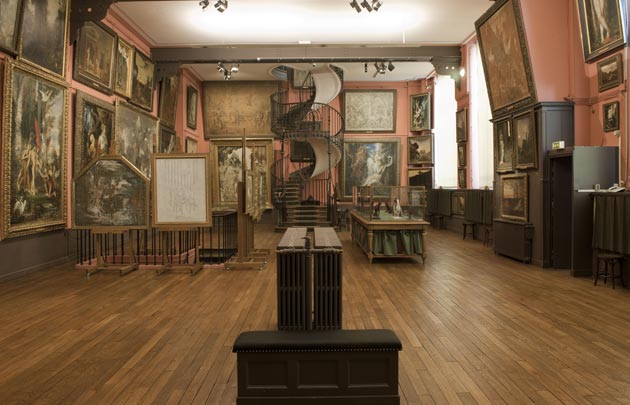 It was Berchère who had advised him to become “the Benedictine of painting”; to throw himself devotedly into art. At the time museums were at the disposal of artist and works were lifted down to perch on an easel at the student’s eye level. We may marvel today of such a lost generosity due to theft and vandalism and all the contemporary discourtesies of greed and disrespect. Gustave returned to Paris in 1859 and met Alexandrine Dureux, his sole intimate woman companion – they remained devoted to each other until her death in 1890. 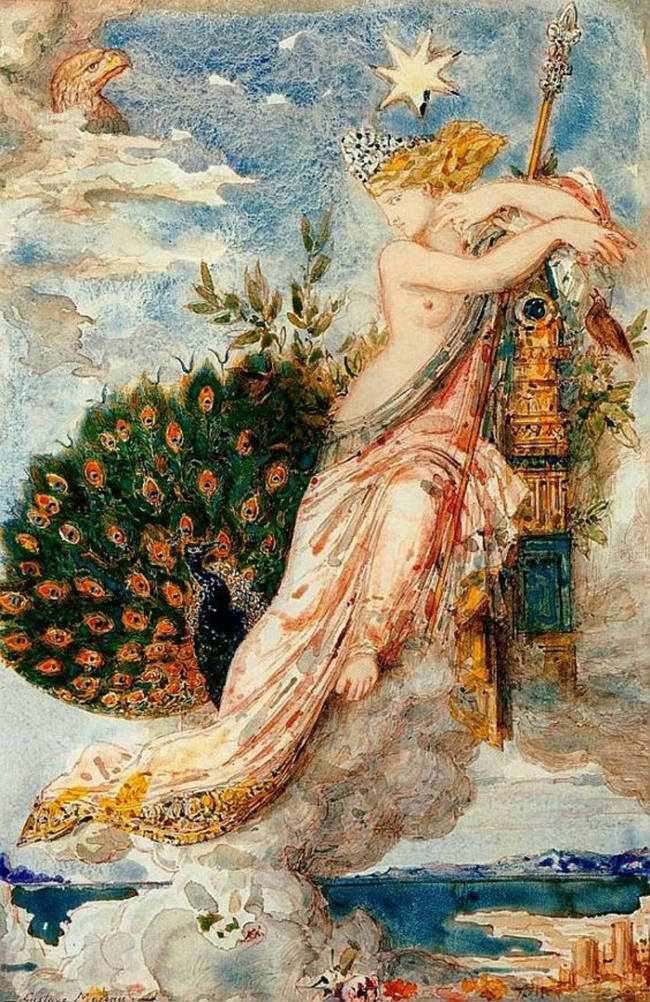 In the 1860s it was the turn of the Naturalists to revolutionize painting and Courbet’s Realism (his astonishing l’Origine de Monde hangs in the Musée d’Orsay) responded in opposition to the saccharine compositions of the Third Empire, but it was Gustave who shocked more with his Oedipus and the Sphinx. This controversial painting was the definitive mark charting his journey into myth and mystery. 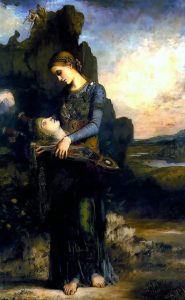 His quest for a new iconography is exquisitely evident in Orpheus, called at the time one of the most beautiful works of the 19th century.

Now Gustave came into his own. He was awarded medal after medal but the discouraging size of his work (buyers were dismayed by such impracticality) led him to the 12th gallery on the second floor of Cour Carrée where he fell in love with the small jewel-like Mughal miniatures of India. He copied these precious works too, inspired by their vivid painted and gilded borders. He presented his entrancing La Peri to the Salon of 1866 as a model for translation into enamel, and his friend Frédéric de Courcy obliged. 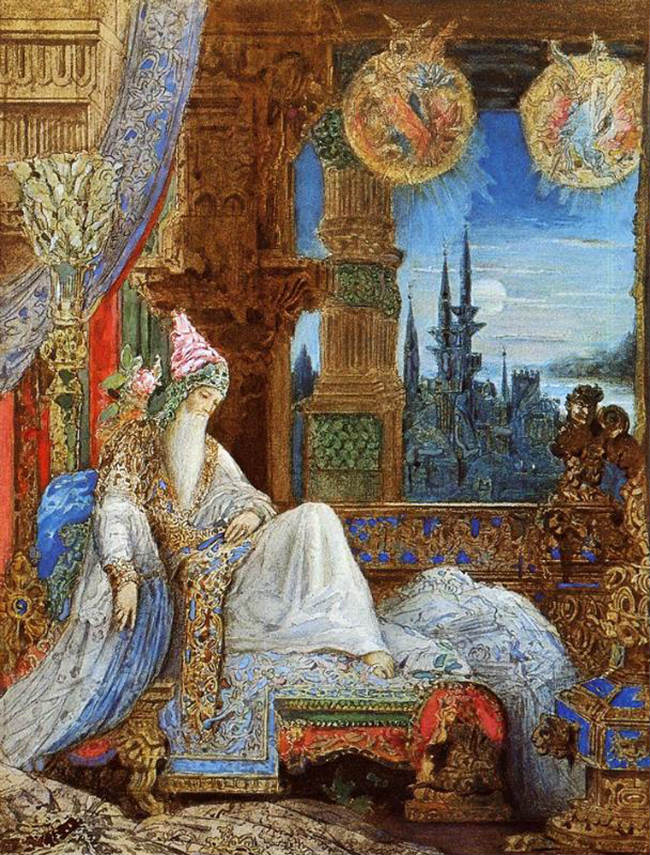 Politically France was again in turmoil – its bitter defeat to Prussia, the formation of the Commune de Paris, the horrifying reprisals and execution of thousands, seventeen thousand it is said on record, but records are deceptive in such times, deeply troubled the artist. It was now he moved into scenes of religion, myth, legend and the Symbolism by which thereafter he became known. His creative imagination opened to him the insights that became his window to the eternal Mystery.

Despite escalating success Moreau remained solitary and elusive, “a mystic immured in the middle of Paris … where not even the noise of contemporary life can penetrate … this man of genius, the mystic, the pagan who lives so remote from the outside world” wrote Huysmans in 1883. Symbolism, with its strange and beautiful atmosphere of mystery, magic, found its apotheosis in Gustave Moreau. 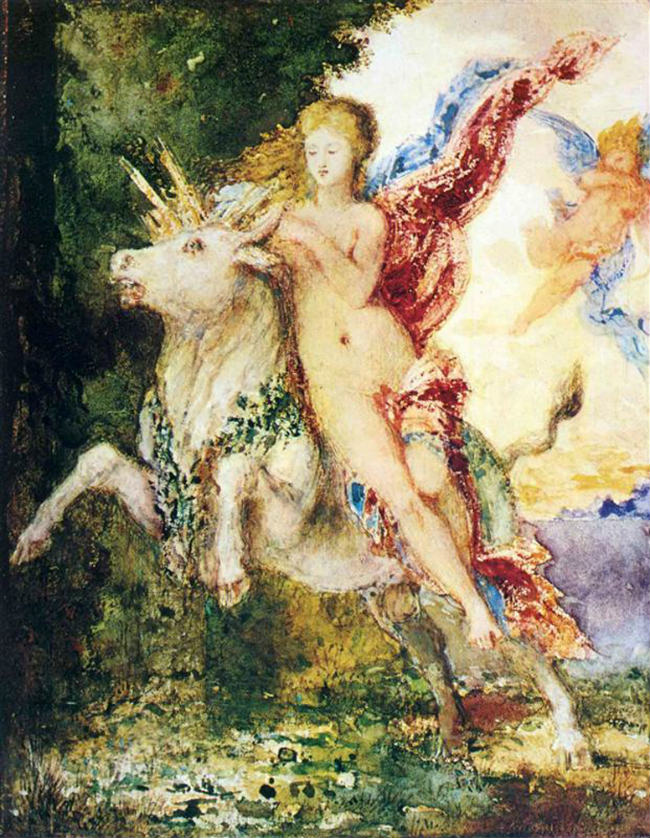 His influence may surprise you – he taught the first of the Fauves before they were Fauves, his powerful use of color influenced and inspired them – Matisse, Marquet and Manguin; the spiritual confidence of his work fascinated Odilon Redon, Proust, Moréas. Intent on opening the spiritual realm of his maturity to the world, Gustave, now 70, set about creating a museum of his beloved home. Alexandrine had died, they had no children, his home would house his art, the children of his genius, and he would bequeath all to the French state. In preparation he converted apartments, removed ceilings to hang his vaster works, and set out to display treasures and family souvenirs as well as artworks of friends. The concept was unique, another first. The result is spectacular.

I stood outside for a moment or two, the door was closed, it was winter, but I knew I only had to turn its handle to enter. And so I did. My world dissolved, I know my mouth formed a singular O on the high register of astonishment! Light years later I emerged into the cold dark winter street, my heart touched by generous genius of Gustave Moreau.

Musée Gustave Moreau, 14 rue de La Rochefoucauld, 75009. Open every day except Tuesday. On Mondays, Wednesdays and Thursdays there is a closure at lunchtime. Full-price ticket is 6 euros. Website: http://musee-moreau.fr/ 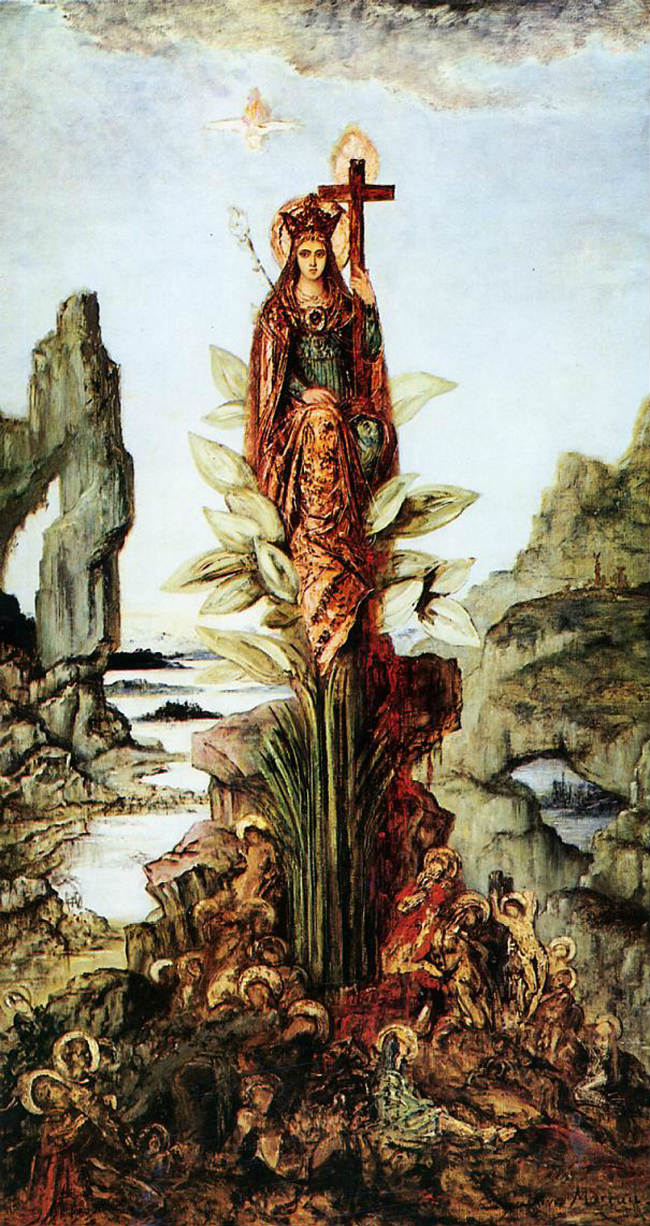 Previous Article See Now in Paris: “Eastern Christians” at the Institut du Monde Arabe
Next Article How Would You Spend 24 Hours in Paris? Our Experts Share Tips