Django Reinhardt and the Temple of the Paris Gypsy Jazz Scene 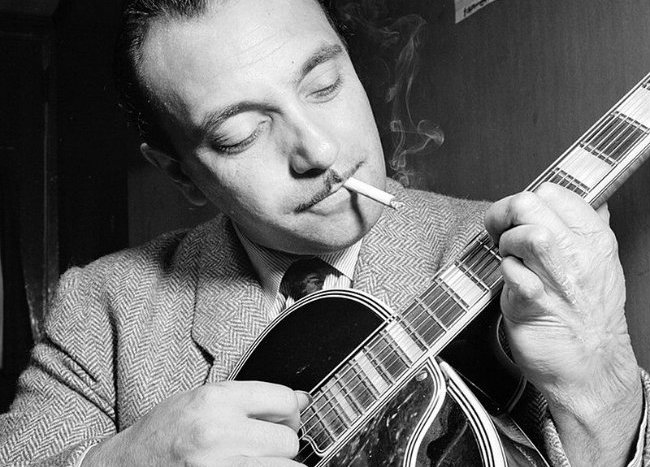 Jazz fanatics may be less interested in hunting for bargains in the famed Marché aux Puces in Clignancourt than in searching out La Chope des Puces where Django Reinhardt played and gave birth to a form of jazz in the 1930s and 1940s that lives on to this day.

This iconic Gypsy Jazz club at 122 Rue des Rosiers in the very heart of the flea market is a favorite haunt for aficionados of ‘Jazz Manouche’, the gypsy jazz invented by Reinhardt after an horrific accident where he lost the use of the fourth and fifth fingers of his left hand. 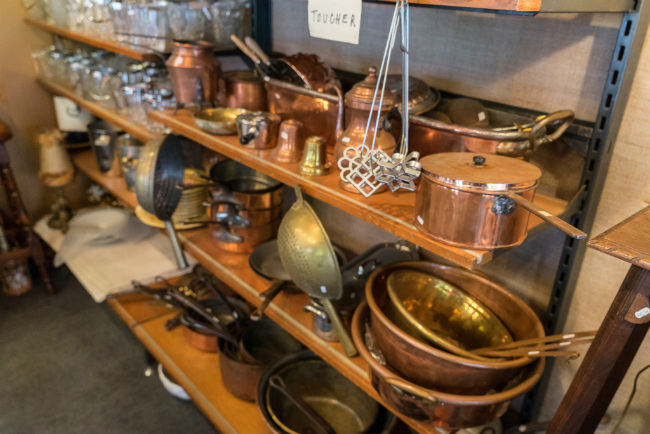 Reinhardt was born in Liberchies, Pont-à-Celles (Belgium) in 1910 to a Manouche family of Romani descent. The family soon moved to the outskirts of Paris where his mother was a dancer and his father played piano in a family band. The Reinhardts were true Romani gypsies, living in caravans in a Romani encampment and following Romani traditions. The Manouche gypsies were imbued with a deep love for their musical traditions, so hardly surprising that Django from an early age played the violin and banjo-guitar. His prodigious talent enabled him to earn a living playing music when he was just 15 years old.

Reinhardt, like all Romanies before him, learned to play by watching and mimicking other musicians. Just as other gypsy jazz musicians copied Reinhardt’s three fingered chord structures, Reinhardt originally learned from generations of other gypsies, their talents passed down either orally or visually. Most gypsies, including Reinhardt, could not read music and many of course, could not read at all.

Following once more in Manouche tradition, Reinhardt married Florine Mayer, usually known as ‘Bella’, a girl from the same gypsy settlement. He was just 17 years old but already had made a name for himself playing the banjo-guitar and was invited by the famed British band leader Jack Hylton to join his band. 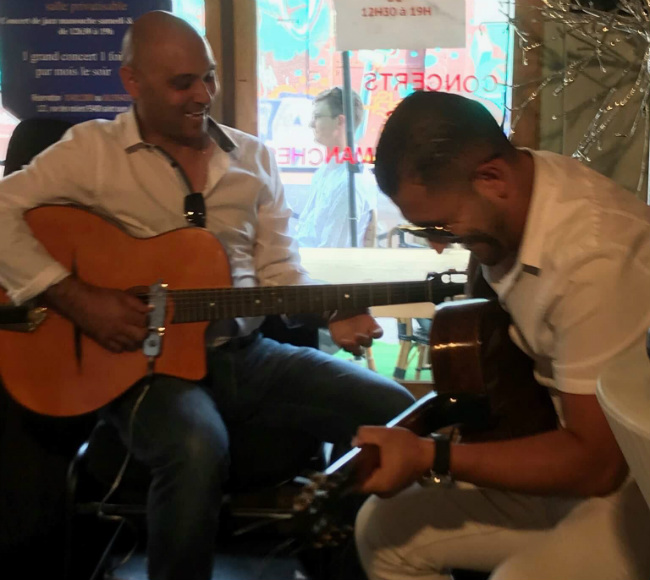 Reinhardt’s well documented accident occurred before he could take up Hylton’s offer. The simple event of a candle knocked over in the caravan he shared with Bella was to transform Gypsy music forever. So extensive was the fire that Reinhardt– dragging his wife to safety through the flames that were engulfing their caravan– suffered first and second degree burns over half of his body. His fingers were so badly burned that doctors believed he would never play the guitar again. But Reinhardt was made of stiffer stuff. He refused to allow doctors to amputate one of his legs and was walking with a cane within the year.

Reinhardt’s stubborn, determined streak– and his downright courage over the ensuing months– resulted in the musician overcoming the handicap of his now permanently damaged hand and inventing a new way of playing, using only his middle and index fingers and thumb.

And so, out of dreadful misfortune, was born the unique, three fingered chord structures and Gypsy Jazz. 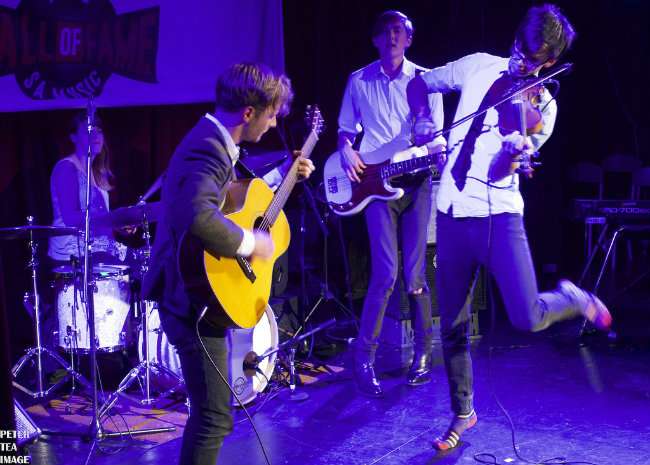 Reinhardt did not find fame and fortune immediately. Indeed it is doubtful that the concept of fame and fortune were of particular importance to him. He remained then, and until the day he died, a true gypsy. Saving money was an alien idea; he spent every penny as he earned it. By now separated from Bella, he was touring throughout France in little clubs with a distant cousin Sophie Ziegler, and they certainly had periods of financial hardship. However the years between 1925 and 1933 allowed Reinhardt to explore other types of music and introduced him to jazz musicians such as Duke Ellington and Louis Armstrong. He abandoned the banjo in favor of the guitar and defined a new resolve to be a professional jazz musician. 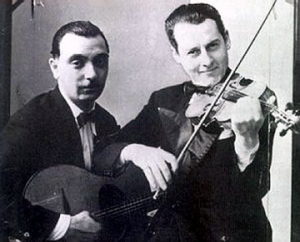 In 1934 in Paris, a meeting of minds and musical tastes with Stéphane Grappelli (acknowledged nowadays to be the finest violinist of his day) resulted in the formation of the Quintette du Hot Club de France, the most innovative and influential jazz group up until the beginning of the Second World War. These years were astonishingly successful for Reinhardt. He was recording on a regular basis, including with the ‘Quintette,’ which included multiple guitarists, horns, piano and other instruments. Decca Records released three records of Reinhardt, and such was his fame, he played with Louis Armstrong, Dizzy Gillespie and Coleman Hawkins but it was with Grappelli that Reinhardt’s unique style was crystallized.

The beginning of the Second World War prompted Reinhardt to leave Grappelli in the UK where they were playing at the time, and return immediately to Paris, leaving Sophie in the comparative safety of England.

Reinhardt was well aware of the Nazi attitude towards gypsies. Like the Jews, German gypsies had already been interned as early as 1933 and were forced to wear a brown Gypsy ID triangle on their chests. (Mirroring the same treatment as Jews who were singled out by the yellow star.) It was indeed nothing short of a miracle that Reinhardt escaped the Nazi camps where, during the war, some 600,000 gypsies in Europe were killed. Being a gypsy and a jazz musician, both of which were detested by the Nazis, Reinhardt attempted his first escape from occupied France. He was saved improbably by a German Luftwaffe officer, a secret jazz lover, who allowed him to go back to France after his capture. Another attempt to escape to Switzerland was once again thwarted and Reinhardt returned to Paris where he remained throughout the war.

Bizarrely, Reinhardt did not keep a low profile but continued playing in Paris in various establishments including the Salle Pleyel, where he played his latest composition, ‘Nuages’, an unashamed anthem for the freedom beloved by Parisians. His luck held and Reinhardt lasted out the war unscathed and free. 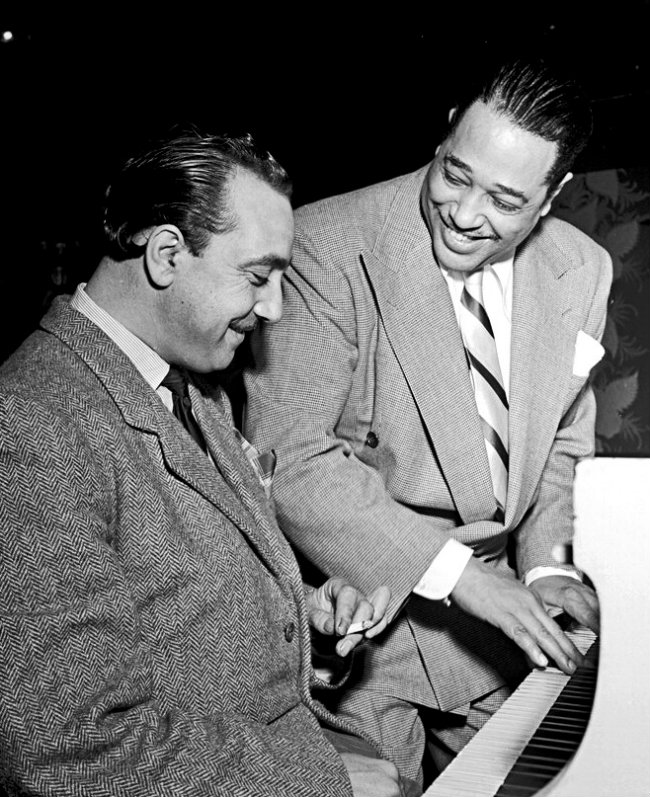 The immediate post war years reconfirmed Reinhardt’s pre-war successes and he traveled extensively, touring with the likes of Duke Ellington and appearing at Carnegie Hall to great acclaim. But yet again, the inherent restlessness in his gypsy soul and his inability to conform to a regulated career, found Reinhardt back in France by 1947 playing in clubs with Grappelli, and becoming more and more unreliable in turning up for bigger, booked out concerts. Reinhardt remained his own man, often to the frustrations of managers who found it increasingly difficult to pin him down and after agreeing to join ‘The King of Swings’, Benny Goodman’s band in the U.S, Reinhardt changed his mind and remained in France.

Despite retiring in 1951 to Samois-sur Seine near Fontainebleau, Reinhardt never gave up playing in jazz clubs in Paris, changing his style, embracing bebop, often playing electric guitar and recording with his nouvelle Quintette.

Reinhardt collapsed outside his house returning from playing in Paris. He was pronounced dead the following day of a brain hemorrage. The year was 1953. Reinhardt was 43 years old. 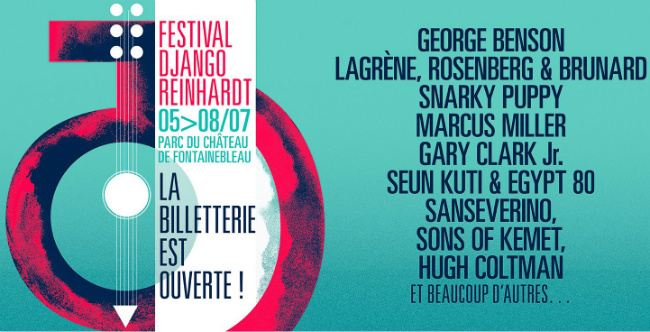 Reinhardt may have died 65 years ago but his music, Gypsy Jazz, lives on as strongly as ever, not only in La Chope des Puces but also celebrated in clubs worldwide, and at the annual Festival Django Reinhardt, held annually in July in Fontainebleau.

Live performances at La Chope des Puces take place from 12.30 until 19.00 every Saturday and Sunday. Grab a bargain in the flea market and pay homage to Django Reinhardt at the same time.

Previous Article The Renaissance of Vins des Pyrénées: A Chic Marais Restaurant & Speakeasy Bar
Next Article Discover the Art of Perfumery at Histoires de Parfums in the Marais