Biking to the Arc de Triomphe 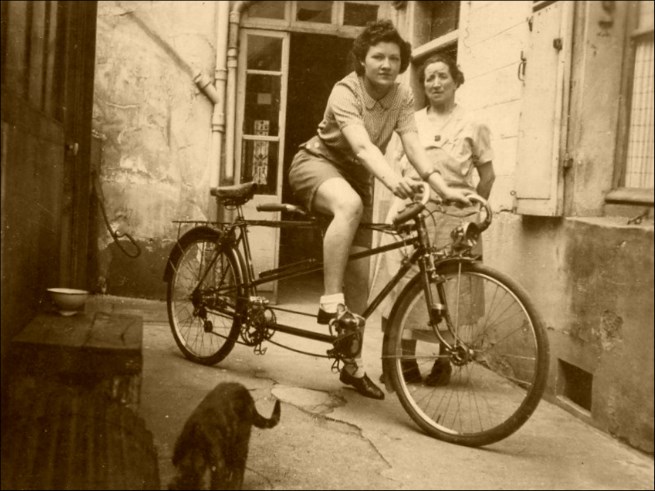 Celebrating the New Year, let’s take a sentimental journey. Pop open a Coca-Cola Light, crank up Claude Debussy’s “Petite Suite,” and prepare for some bumpy late 19th century time travel along avenue Foch. This centuries-old promenading stretch is my favorite spot for gazing up at the Arc de Triomphe. Each time, I tumble flat. 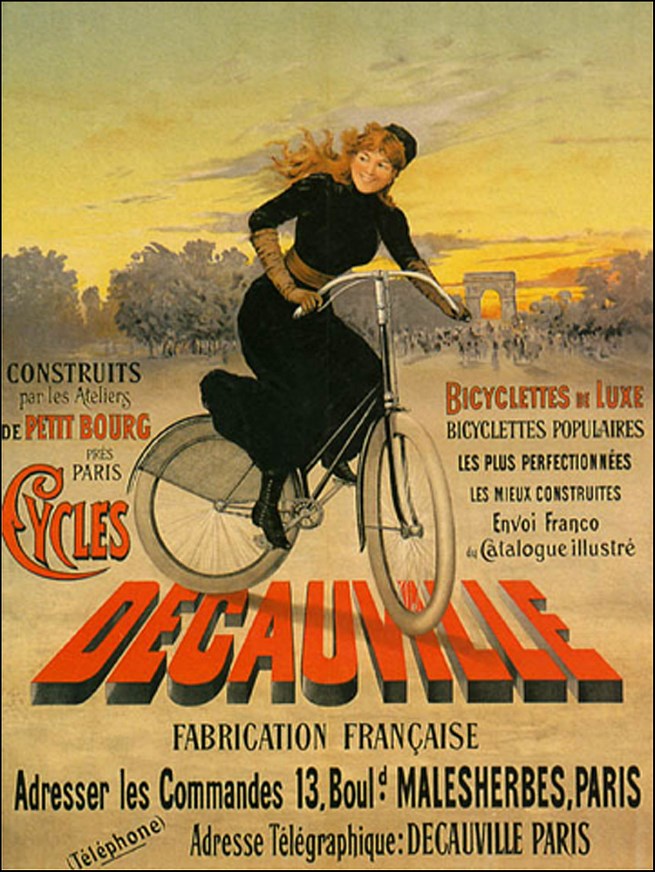 Don’t forget les bicyclettes. Ladies, this includes you. By the 1890s, thanks to the introduction of the Starley Rover Safety Bicycle and its handsome pneumatic tires, “all Paris was a-wheel,” and women were not only pedal-pushing in public but also unblushingly flaunting menswear or “something alarmingly like it.” 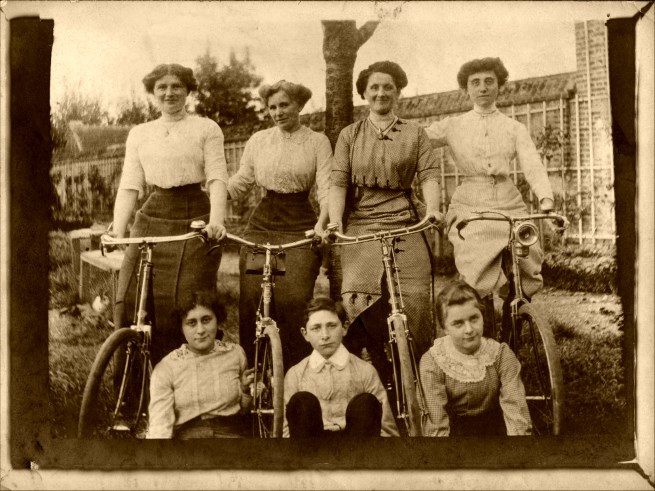 “The first [bike] costumes were mostly homemade affairs, designed by the riders and made up by work-women sworn to secrecy,” said Scribner’s magazine in 1895. Back then, exercising in public was brand-spanking-new, see.

Possessing “real legs,” excitement about the bike craze and its newly-adopted garb spread, and soon women were zipping all over Paris, wearing gaiters, straw caps, high-collared blouses with leg o’mutton sleeves, and tight, tailored bodices, along with short bloomers, adding “one charm more to the Bois de Boulogne.” 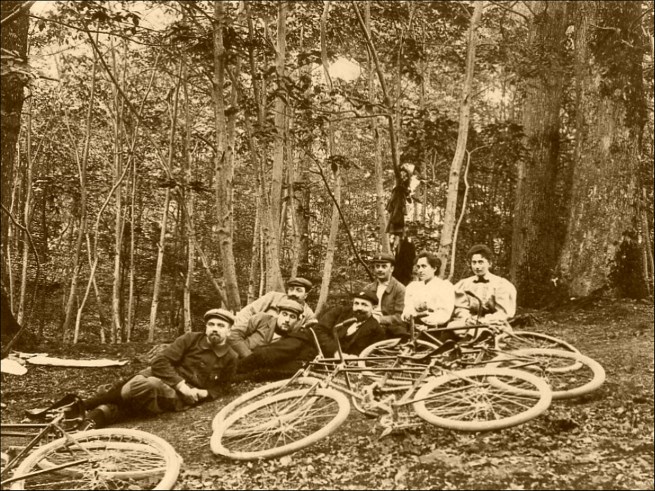 On a Break: Hobnobbing with the new status symbol, 1900 (Photograph: T. Brack’s archives)

During the Gay Nineties, you were in with the in-crowd if you were seen hobnobbing with the new status symbol. Mass-produced, les vélos were also affordable. Everyone was “mounting the steeds of steel and rubber” or learning how to ride.

In velodromes, lessons were available for 12 to 15 Francs. Two popular tracks were located in the Bois de Boulogne and along the Champs Élysées. And like today’s Vélib’ Bike Program, bikes could be rented by the hour. Nobody got left behind. 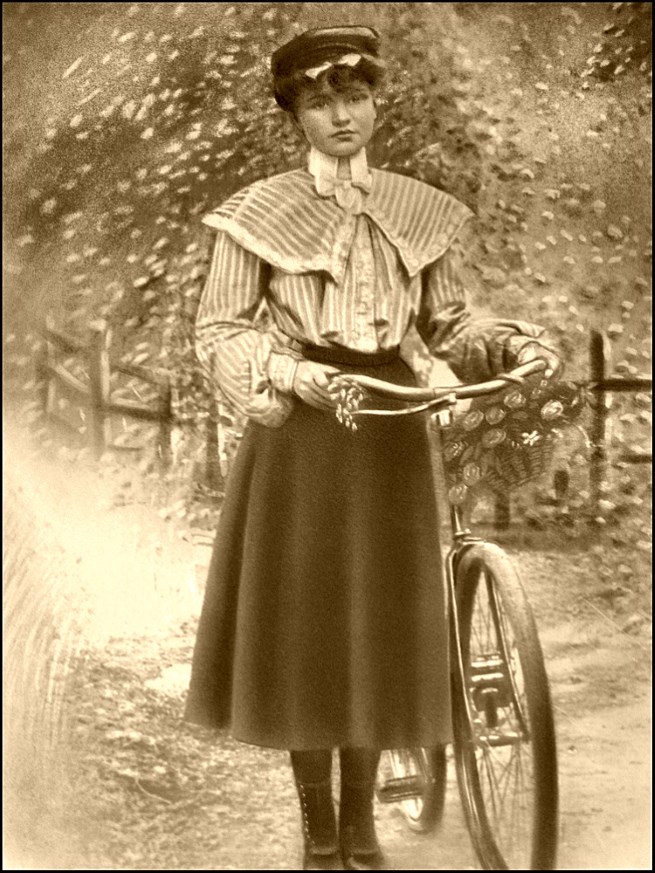 Even photographers, artists, and writers got caught up in the frenzy. In fact, the bike makes more than one cameo in Émile Zola’s 1898 novel, Paris. Marie, his protagonist, sings the praises of bicycling, saying:

“By wearing rationals [baggy trousers] women free their limbs from prison; then the facilities which cycling affords people for going out together tend to greater intercourse and equality between the sexes . . . One goes back to nature, to the earth, our common mother, from whom one derives fresh strength and gaiety of heart! Just look how delightful this forest is. And how healthy the breeze that inflates our lungs! Yes, it all purifies, calms, and encourages one.”

I second that motion. 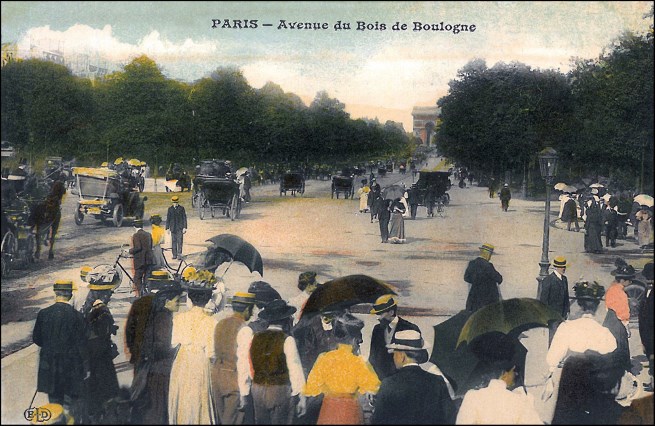 Now, let’s glide on over to the Arc de Triomphe. FIRST one to reach the monument buys the vin chaud. As we bowl through the trees along avenue Foch (formerly, the avenue du Bois de Boulogne), keep your eyes and ears open for composer Claude Debussy’s former digs at 23 Square l’avenue Foch.

Here the music pioneer wrote, “There’s nothing more musical than a sunset!” I couldn’t agree more. Tip: The Arc de Triomphe at l’heure bleu makes a dandy of a backdrop for your Paris photo op. So plan accordingly, Instagrammers: #Timingiskey #Parissunset #Nevergetsold 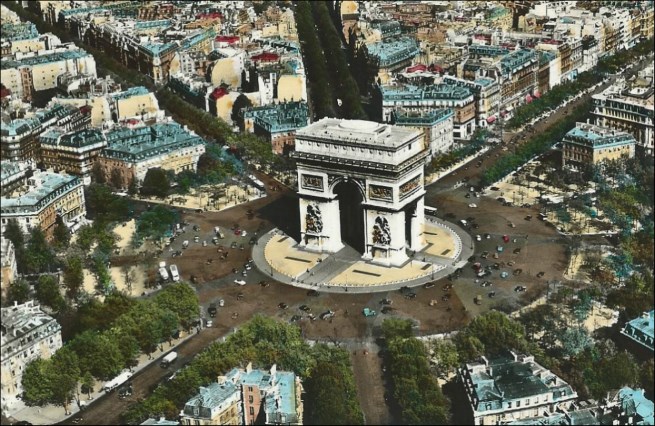 Like a sympathetic angel in a Wim Wenders film, the Arc de Triomphe looks down on the city from her post on top of the hill of Chaillot.

Located at the bustling center of star-shaped Place Charles de Gaulle, the Arc de Triomphe is the key piece of L’Axe historique—a light beam line-up of monuments that starts at the Sun King’s equestrian statue in the Musée du Louvre courtyard and ends in the outskirts of Paris at La Defense.

At 165-feet-high and 150-feet-wide, she’s the second largest triumphal arch on earth (the only larger one is a puffed up replica in Pyongyang, North Korea). “The pile of stone for a pile of glory!” is how writer Victor Hugo described the Arc de Triomphe’s overpowering allure. 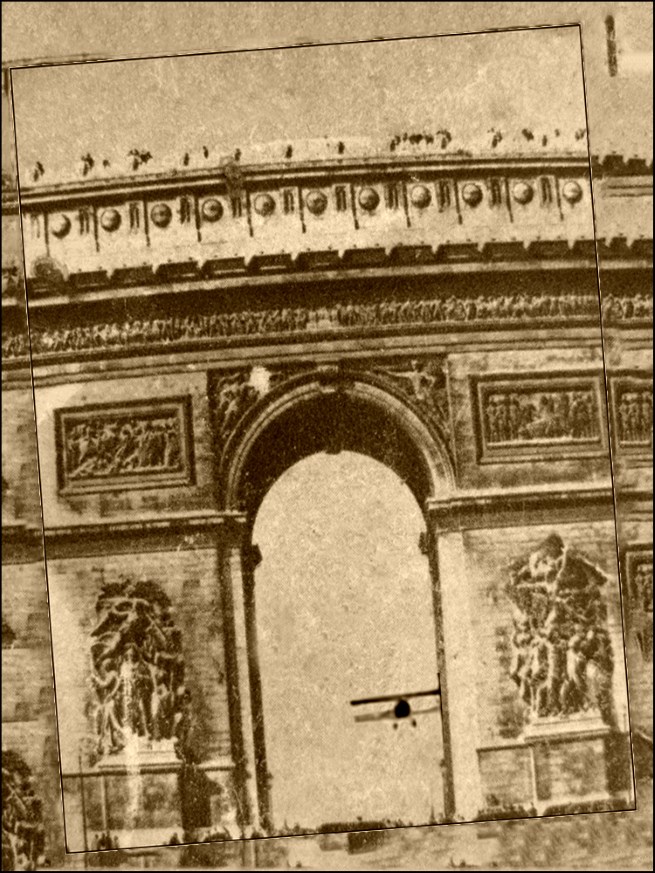 In 1919 Lieutenant Charles Godefroy flew his Nieuport through the arch after practicing with a wooden replica of the same size. (Soapbox: T. Brack’s collection)

In 1919, French aviators were somehow left out of the planning for the WWI victory parade. Hot under the collar, they decided at an impromptu meeting at Fouquet’s bar on the Champs-Elysées to “repair the affront.”

Lieutenant Charles Godefroy was assigned to the task of rectifying the omission. On the 9th of August (three weeks after the parade), he flew his Nieuport biplane through the arch with the greatest of ease, after practicing with a wooden replica of the same size.

It was a risk worth taking, as the aviators were never left out of any future celebrations. In fact, nowadays the French Air Force provides the finale for the Défilé militaire du 14 juillet (The Bastille Day Military Parade).

Flying in the near future? 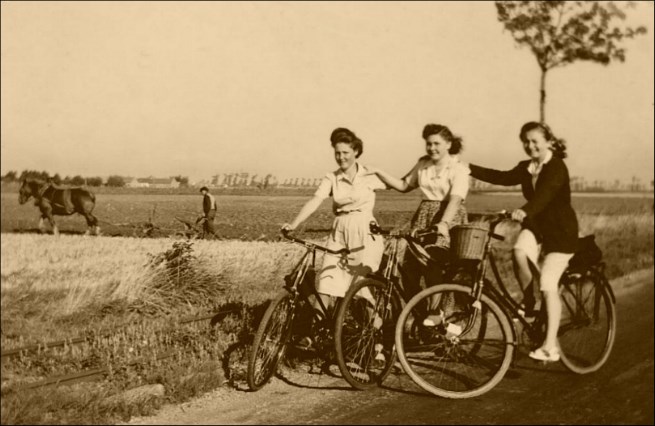 The Wright Brothers financed their flight experiments with the profits made in their bicycle repair and sales shop during the 1890s Bike Boom. Based in Dayton, Ohio, Wilbur and Orville offered rentals and handcrafted originals. One of their top “Van Cleve” models is now at the Smithsonian National Air and Space Museum. Still spiffy-looking, “Get there first!” was the sleek machine’s enticing slogan.

Clipping from Debussy again, “The century of airplanes deserves its own music.” 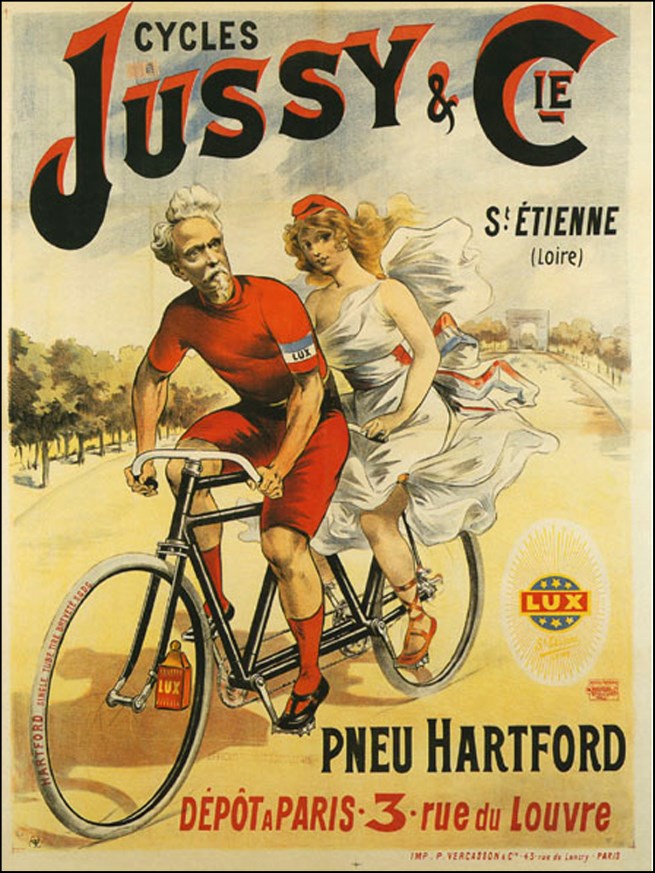 I think Zola would have concurred. After all, he wrote, “Pierre and Marie scarcely touched the soil: it was if wings had come to them, and were carrying them on with regular flight . . . It is like boundless hope, delivery from every shackle, absolute freedom of motion through space. And nothing can inspirit one more gloriously—one’s heart leaps as if one were in the very heavens.”