“Vigato chez Lapérouse” revealed Gilles Pudlowski on his blog. And we all thought that when Jean-Pierre Vigato sold Apicius, just off the Champs Elysées, to Mathieu Pacaud, that the 66 year old chef was off into the countryside to hunt, shoot and fish. No way!

New owner Benjamin Patou told Le Figaro that he’s always been fascinated by Lapérouse, “the world’s most romantic restaurant”, which he’d tried several times to buy, and finally succeeded after dining there to celebrate his 41st birthday.

Lapérouse, listed as a Monument Historique, is on the Quai opposite the Seine and was, in 1766, the property of Monsieur Lefèvre – purveyor of beverages to King Louis XV – who transformed it into a bar, wine merchant and inn. His delicious food and wine impressed le tout Paris who flocked to eat, drink and make merry in the first floor dining rooms.

Fast forward to 1866 – enter Jules Lapérouse and the mansion took on the air of a literary salon attracting the likes of Guy de Maupassant, Baudelaire, Emile Zola, Colette, Victor Hugo (reserve the pretty salon where Hugo wrote and entertained his family – the waiters knock and wait before entering, bien sûr). Auguste Escoffier, King of chefs, chef to Kings, headed the kitchens, now helmed by Vigato.

Here senators and noblemen held trysts with their “cocottes.” You can still see the scratches on mirrors where the “cocottes” tested the diamonds, gifted to them, for authenticity! Later on clients included Marcel Proust, Eugène Delacroix, Berlioz, Sarah Bernhardt, Orson Welles, Wallis Simpson and the Duke of Windsor, and François Mitterand. It’s where Serge Gainsbourg met Jane Birkin and is one of Woody Allen’s locations for “Midnight in Paris”.

Smile at Vincent and he’ll give you a fascinating tour, and maybe the wine cellars, then sip flutes of champagne at the ground floor bar, as did Jean Cocteau with Roland Garros!

Throughout the mansion, discreet renovations are the work of interior architect Laura Gonzalez – Maison&Objets designer of the year 2019 – who has carefully curated the restoration of the woodwork, artwork and period frescoes while simultaneously adding her own quirky, romantic touches.

Lapérouse held three Michelin stars between 1933 and 1968 and two stars from 1949 to 1951. But, stars or no stars. “This place is unique, magical, legendary a never ending challenge. We decided to create menus inspired by history – with classic service in the traditional manner”, explains Jean-Pierre Vigato.

And, because sweet memories of a restaurant come at the end, who will ever forget the arrival of Michalak’s dramatic take on the classic mendiant? Carried majestically to the table on a silver tray, the dark chocolate, almond and dried fruit maxi bar is cracked, dramatically, by Vincent, with a “Baccarat” glass hammer– a perfect reflection of an amazing Maison de Plaisirs. 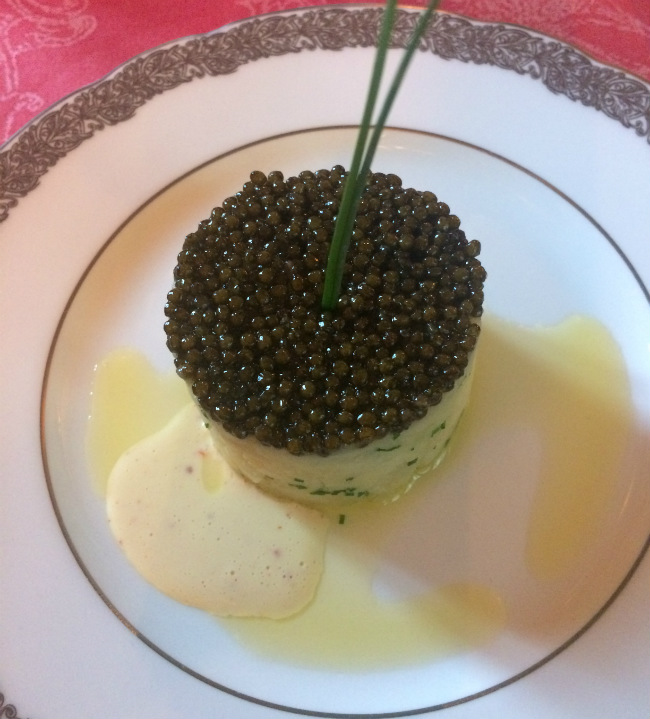