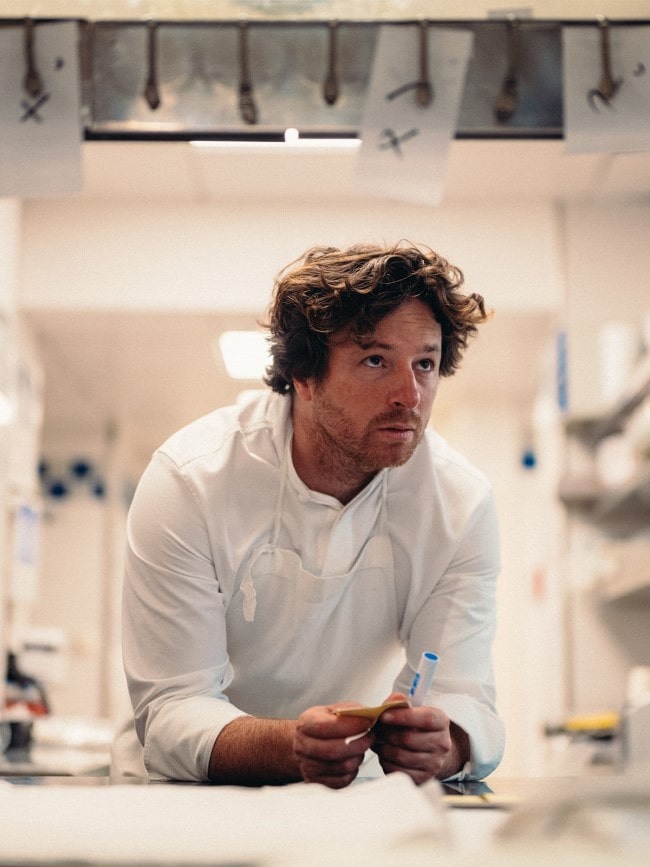 It was a sad start to 2021 for Jean Imbert. The chef lost his beloved grandmother, Nicole, aka “Mamie,” who taught him and bestowed the art of cooking to the point that he named his restaurant “Mamie.”

The winner of Top Chef 2012 posted a tribute to Mamie on his Instagram account, admitting, “since yesterday, I’ve cried like a baby, remembering every memory, every Christmas at your house, every Sunday lunch. I know I became a top chef thanks to you.”

Born on July 18, 1981 in L’Haÿ-les-Roses (Val-de-Marne), Imbert says there were no pro cooks in the family; his parents ran a successful bookbinding and printing business.

Bored at college, he decided to take an internship at the late Jean-Pierre Crouzil’s now shuttered Michelin 2-star restaurant in Plancoët, Brittany, which, as well as Mamie’s influence, was a turning point and decided his future.

In 2012, he won season 3 of Top Chef, M6 TV’s culinary reality TV show. With his hyperactive hip-hop attitude Imbert’s one of the show’s best-known winners – coming up Season 13 !

Fast forward to August 2017, when he presented Season 4 of “Who Will Be The Next Great Pastry Chef?” And, by 2018, he was off to the USA, cheffing at the new Miami restaurant Swan and Bar Bevy run by his bestie, the über rapper Pharrell Williams, and nightlife mogul David Grutman.

In November 2018, he was playing to packed tables at Encore restaurant, NYC, in the Meatpacking District, the farm-to-table menu committed to using only local and seasonal produce.

Back in France for the Summer of 2020, mixing cuisine and show biz, Imbert took the helm of canteen ToShare, another project by Pharrell Williams, located at Place des Lices, Saint-Tropez. Add La Case at Cheval Blanc St-Barth (LVMH group) and rumors that he’ll direct the Dior Restaurant when the transformed maison reopens next year, and you wonder when he sleeps.

Then on July 1, 2021 came the hot news that Jean Imbert was to succeed Alain Ducasse as head honcho in the kitchens of the posh Parisian palace Plaza Athénée. Wow!

The announced change of style caused havoc within the fooderati, spilling rivers of ink and indignation – Imbert’s like Marmite, you love him or… To the nasty naysayers he responded with an elegant Instagram post. “I know I have dreams that are much too big for me – but how lucky I am to be able to live them! Of course, some doubt my abilities for this prestigious post but, before saying, and writing, that I’m not going to be up to the task, maybe we could all wait and see – taste my project – give me a chance, right?” Right!

Like a warm hug receiving the support of his illustrious predecessor, Imbert said: “I’ll never forget taking breakfast with Alain Ducasse that morning. He assured me that I’m the best choice and he’s happy it’s me. I thank him heartily for his support in my new adventure.”

Reopened on the 8th September with nips and tucks by Bruno Moinard and Claire Betaille (you’ll find lots of lush greenery and new carpet), the listed Art Deco room buzzes 7/7 at lunch and dinner.

Stay tuned for the reopening of the former Alain Ducasse restaurant – early 2022. See you there?

Previous Article Francette: Dine on the Seine with Eiffel Tower Views
Next Article Thierry Mugler’s Couturissme: Between Fashion and Fantasy