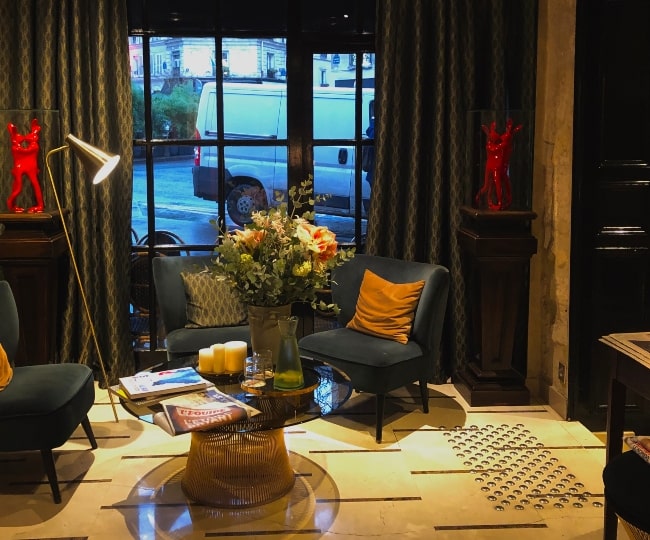 In 2005 Yves Camdeborde purchased a hotel and restaurant in the very heart of the Odéon, the small little pocket in Saint-Germain-des-Prés. With a goal to reinvent the dining experience he also managed to create a hotel that would be the perfect match to his amazing food. His trio of restaurants that sit below the hotel are legendary and a highlight of anyone’s trip to Paris, but if you are able to stay even one night in his 4-star establishment, jump at the chance.

It’s not a secret that the L’Avant Comptoir de la Terre is my favorite wine bar in Paris, I even wrote a love letter, errrr article, to the famed restaurant for Bonjour Paris. Even though the food and the wine is among the best you will find in Paris, it is the people in the Comptoir family that truly make it so special. So when I arrived in January, the wonderful Sylvain Orel (who heads of L’Avant Comptoir de la Terre) and Gautier Cressard presented me with one of the most amazing gifts I have ever received. Inside the envelope was an invitation to stay for a night in the Hemingway Suite. As soon as I read it I instantly welled up with tears; what an incredible thoughtful and exciting gift and I couldn’t wait. 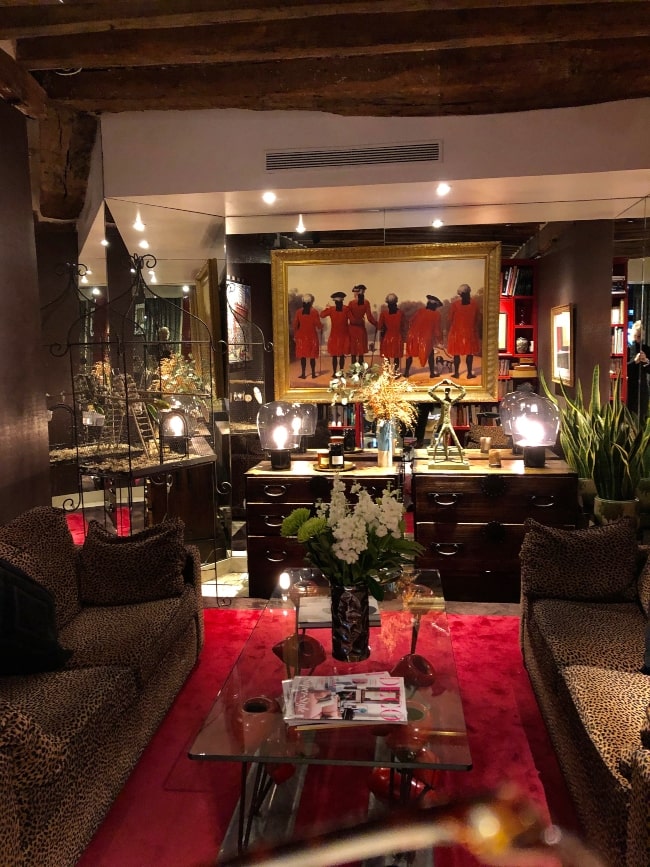 The 18th century building topped with the oh-so-Parisian mansard roofs was revived and updated but kept all of the Parisian charm. The exposed stone and beams all date back to the late 1700s and are paired with furnishings and art that blend together seamlessly.

The location was once the home to Henri II de Bourbon, Prince de Condé. His large estate stretched across much of Odeon until 1773 when it was all demolished and these lovely buildings replaced it. Sitting on top of the legendary Le Comptoir, the 22 hotel rooms are each named after an author that was influenced by Paris. Smack dab in the center of the Lost Generation literary universe and just steps away from the first two locations of Sylvia Beach’s original Shakespeare and Company, you can swing open the large windows filled with planter boxes of geraniums that open onto the Carrefour de l’Odéon and just imagine some of the greatest writers strolling below.

French authors Balzac, Dumas, Rimbaud, Proust and their many well known novels are easy choices to have a room named for. However, I love that they also chose a few others that some visitors may not know, but by the end of their stay they may have a little window into their lives. Madame de Sévigné, room 54, is named after the 17th century woman of letters, who for 25 years crafted the most eloquent letters to her daughter and friends. Her letters became so popular that they were reproduced and passed around and became the talk of the salons in Paris. Many years after her death her granddaughter amassed more than 600 of her letters and published them for generations of grateful readers. 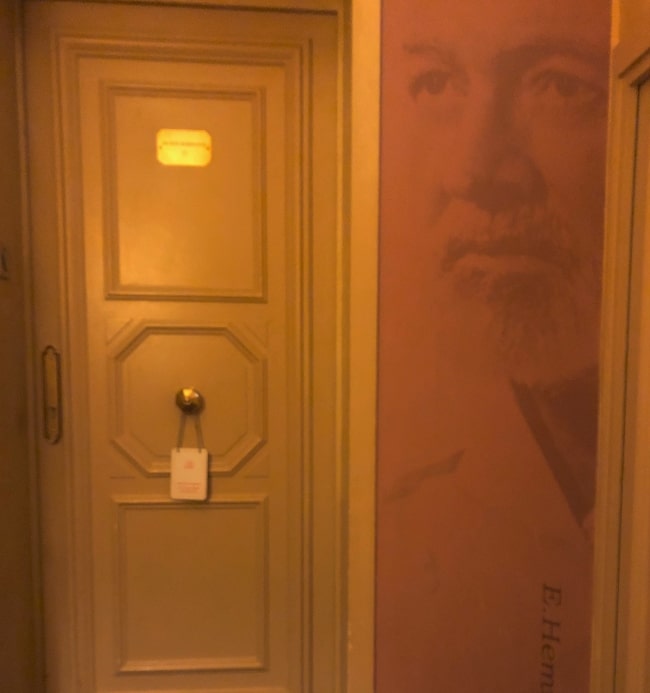 Charles Perrault, another 17th century gem who wrote Le Petite Chaperon Rouge, Cendrillon and La Belle au bois Dormant, a few that may be more well known for their
Disney movies, Little Red Riding Hood, Cinderella and Sleeping Beauty. All of these childhood classics that stretch back 500 years all came from the mind of the French man that would also advise the Sun King. You can put on your glass slippers, check into room 40 with your prince charming and bask in the luxury. Another favorite is room 56 named after Marcel Aymé, the author of the short story Le Passe-Muraille, the man who could walk through walls. On a quiet side street in Montmartre you will find the bronze sculpture that emerges from the wall just like Aymé’s story.

Other rooms are named for Georges Simenon, James Joyce, François Sagan, Francis Jammes, Antoine Blondin, Georges Bernanos, Curnonsky, Li Po, Jorge Amado, Paul-Jean Toulet, Marguerite de Navarre and Casanova. However the whole reason I was here was to stay in the room devoted to Ernest Hemingway. On the 2nd floor, with its large windows that open to the Odéon skyline, not one detail is missed. The large bed with lavish linens and pillows was one of the most comfortable I have ever laid my head on and never wanted to leave it. Near the window is a lovely settee just begging you to take an afternoon nap while the light breeze fills the room. Of course there is a small table and arm chairs, the perfect place to jot down a few paragraphs for your memoir while the inspiration surrounds you. There is nothing 18th century about the bathroom. It’s equipped with everything you need including the deep bathtub, fluffy robes and towels and shampoos and lotions from Anne Semonin. 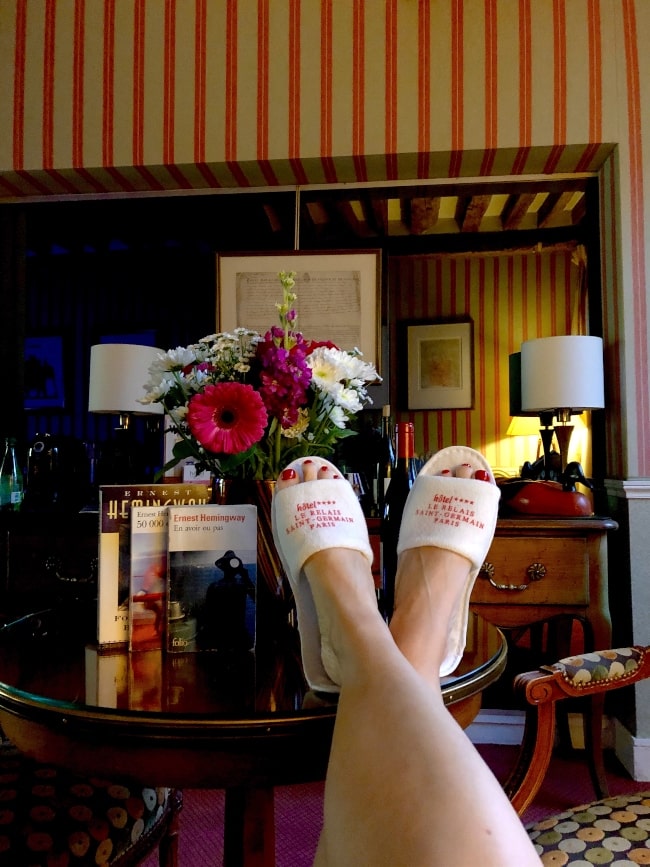 With your hotel reservation you are able to secure a seat in one of the hardest to get in restaurants in Paris. But make sure you rise from your slumber and try to pull yourself out of that bed and make your way down to the restaurant for breakfast. The best breakfast in Paris is waiting for you. Reserved for hotel guests only, you will take part in an experience that is straight from the philosophy of Yves Camdeborde: The best products from the best producers. In the 19th century, Le Petit Monaco opened here and would serve the Odéon residents and a few well known names. Picasso, James Joyce, Matisse, Man Ray and Hemingway dined in this small restaurant just steps away from Sylvia Beach’s lending library. It went through a major renovation in the 1940s and once Camdeborde got his hands on it, he renovated it to its prewar glory.

Back to the breakfast, here is just some of what it includes. Comté de Montagne de 16 mois from the Fromagerie Sanders, Baguette Parisienne, Croissant and Pain aux noix from Gérard Mulot, Bordier Beurre de baratte, l’oeuf de poule à la coque and Jambon ibérique. Add in some fresh fruit, yogurt nature de Saint Malo also from Bordier and a café creme or two, all while you sit at a cozy table watching the rain come down outside. It is all included with your overnight stay and many would go back just for breakfast alone. 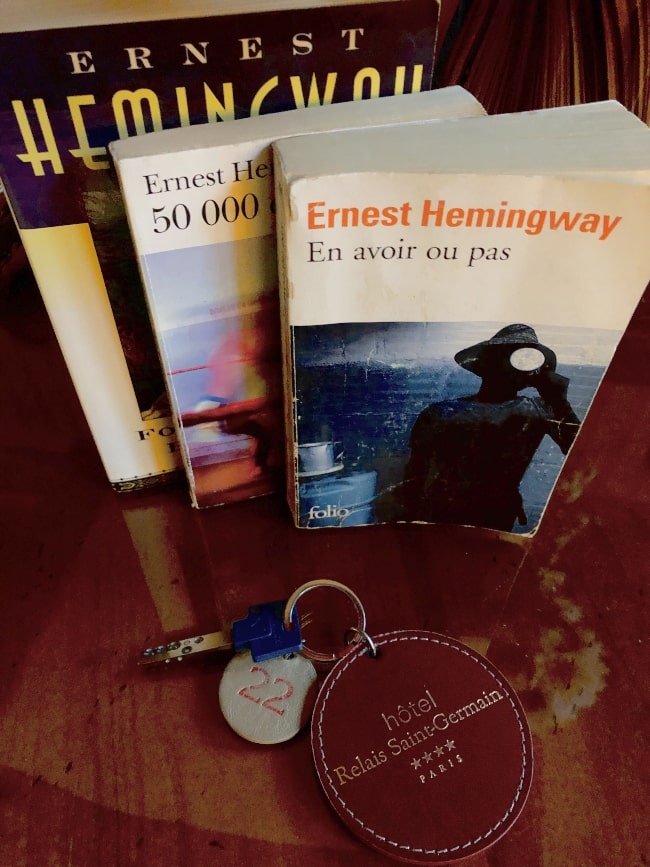 Each room has a few books from the author that christens its door and in the Hemingway room they have copies of Hem’s short story Fifty Grand, and To Have and Have Not, both in French. That morning I walked up the street to the San Francisco Book Company and bought a copy of For Whom the Bell Tolls and left a little message of thanks to Sylvian and my Comptoir family for the next people that stay in the room. From one Hemingway to another it will do until the day I leave my very own book there alongside Ernest’s. Before I checked out, I sat there at the table, worked on my own book and thought about just how lucky I was to have such wonderful people in my life and while Ernest never stayed in this room, his spirit surrounded me and that truly is a gift.

Rooms start at 295 euros and are worth every penny. Let Gautier Creissard and his wonderful staff take care of you and save room for that breakfast. Check out my Instagram page for a saved video tour of the room, and if you have stayed in one of these wonderful rooms let me know. 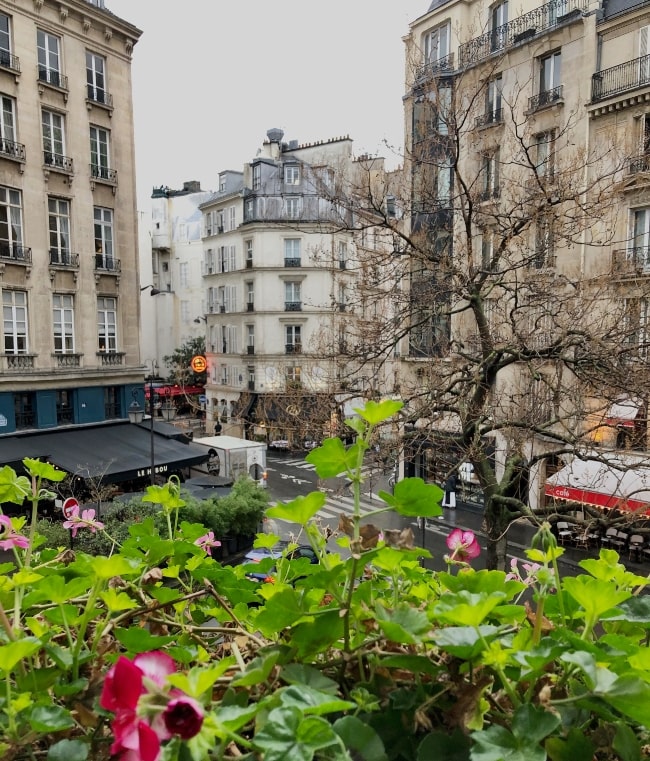 Previous Article 50 Things I Miss about Paris: Part I
Next Article What does Coronavirus mean for the currency market?