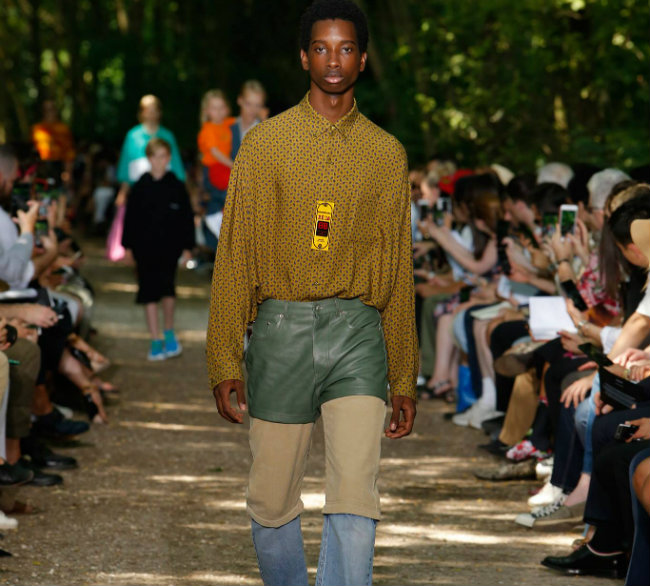 It’s the season when layers of clothing are shed in favor of lighter ones, and, less of them. In Paris, it’s when you find locals and tourists alike lounging in greater numbers along the Seine and in the parks, and by Berthillon.

But in the fashion world, summer is the time – as it is no matter the season – when the industry looks forward. It’s a fast-paced business that’s always five steps ahead, and hard to keep up with. (That’s part of the fun of fashion, in a way – it’s aspirational, and always a bit out of reach.).

At the end of June, the new shows for Spring 2018 Menswear popped up around Paris.

(Haute Couture Fall/Winter 2017 Fashion Week is going on this week in Paris, and Bonjour Paris will have coverage when shows conclude.)

The Spring 2018 men’s fashions set the bar high, in terms of style, trend, and in particular, presentation.

One of the most visually and conceptually interesting shows was Balenciaga, which was held outdoors, at Bois de Boulogne. “A Walk in the Park with Kids,” reported Vogue of the unique presentation choice. Looks from the show were heavy on traditional spring colors like light blues and yellows, and non-traditional looks like multi-layered acid-washed blue jeans. The acid-washed jeans was one of many pieces that called the 80s to mind, along with long, Breakfast Club-y trench coats and oversized purple blazers, and outerwear that looked like it was plucked from the wardrobe department on the set of Copper Mountain.

Some of the Balenciaga models walked with children in tow, giving the show a fun, easy, natural quality. Fashion runways can be stuffy, but these pint-sized additions made it less so.

Though, attitudes on the unusual choices (outdoors, children on the runway) were mixed. At Vogue, one editor said of the show: “there was an unnerving look about some of the childless men…. some of the clothes, commonplace hangovers from the ’80s and
’90s, were about as non-fashion as high fashion can be.”

Apart from Balenciaga, there were a number of other buzzed-about shows. The Thom Browne show became a hot topic with every clack-clack sound the models’ feet made walking down the runway. Each model in the show wore heeled boots, like a chic, swashbuckling Jack Sparrow.

Another hyped show was Officine Générale. GQ wrote of it thusly: “This season, designer Pierre Maheo brought the French chic in bucketloads, with a parade of covetable, wonderfully wearable summer suits, relaxed pleated trousers and light outerwear in a
soothing, Paris-classic palette of black, grey, white and navy, with pops of lavender and green.”

There were definitive trends that emerged across the shows, from Lanvin to McQueen to Kenzo to Comme des Garçons to Louis Vuitton, and more. The 80s theme cropped up in the collections of a number of fashion houses, with many reviewers calling special attention to the windbreakers and Hawaiian shirts seen on models. (Though, The Wall Street Journal was not as keen on the Hawaiian shirt look, having called it “The ‘I’m
at Home Depot running errands, but I really wish I was at the Copacabana’ shirt.”)

Needless to say we’ll be seeing these looks next year, or, as a precursor to wearing them, you may see the clothes on your Instagram account, depending on whom you follow.

And with the Women’s Haute Couture shows in full effect this week, the
fashionistas and models and designers will continue to flood the city
streets, as Fashion Weeks are one of the many things that make Paris
Paris.