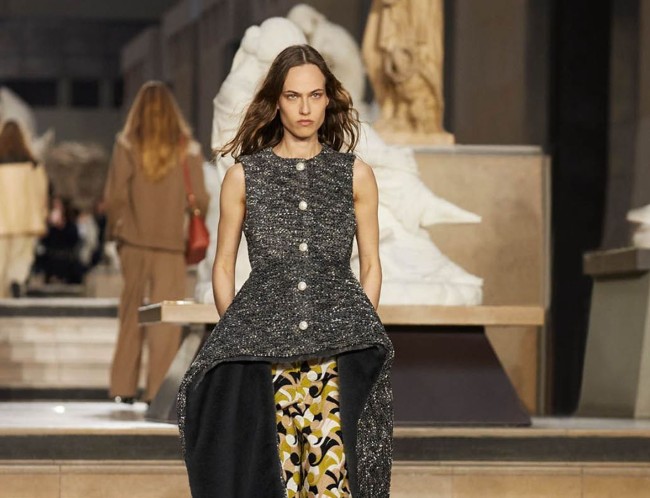 Paris Fashion Week shows concluded in Paris earlier this week, and while we’re not even into spring yet, the fashion set is already looking towards the fall – and we love what we’re seeing. Here are some of our favorites from the Fall/Winter Ready-to-Wear (RTW) shows this season in Paris.

It can’t go unmentioned that one of the main events of Paris Fashion Week wasn’t on any runway at all. Singer Rihanna, who is currently pregnant, wore a beautiful, all-black, sheer ensemble in Paris for the Dior show. The look reverberated around the world via social media, and fans loved it. Seeing Rihanna embrace her changing body felt empowering to many who admire her.

And speaking of that Dior show, where Rihanna showcased her growing baby bump, the show was awash in elegant and envelope-pushing new looks, including lots of corsets, that we come to expect from this notable house. Dior creative director and designer Maria Grazia Chiuri’s looks for the fall and winter showcased protective, high-tech gear with that sleek, sophisticated look that Dior fans have come to know and love. As is customary of Dior, the color black was a heavy hitter in the fall and winter looks.

WWD reports that “[Chiuri] collaborated with D-Air Lab, a start-up that produces items like the Antarctica Suit, which allows scientists to work in temperatures as low as minus-128 degrees Fahrenheit. A version of the suit, complete with electronic control unit, found its way into the show, as did variations on the start-up’s airbag vests.”

We love to see this intersection of tech and fashion, and it comes as no surprise to see it, too. Fashion is an industry that is constantly pushing the limits of what’s possible and imagining new heights to reach.

Note: Dior has a new flagship store in Paris as well.

The Louis Vuitton RTW show was groundbreaking in more ways than one. It was the first-ever runway show held at the Musée d’Orsay. And a show of such note, it couldn’t – and thankfully didn’t – disappoint.

The Vuitton looks for fall and winter included pops of color from LV scarves, and heavy, dark leather jackets. Vuitton, a company that originated as a leather luggage business, typically finds ways to incorporate the house’s early roots into its runway shows, and it did for this latest collection, too.

The new collection featured lots of leather, bags, oversized jackets and skirts, and darker colors one might expect for colder months of the year. An 80s-reminiscent return to large, oversized blazers was a clear theme, along with unusual prints in bold colors.

If other colors went with darker hues, French fashion house Balmain was all about the whites and brights. In Balmain’s latest, futuristic collection, most models wore white ensembles with structured silhouettes.

Olivier Rousteing, French fashion designer and the creative director of Balmain since 2011, made a statement on social media before the show, in which he acknowledged the ongoing crisis in Ukraine. He said, “We are well aware that there are more important things happening in the world today. It’s hard to feel right about focusing on runways and clothes, as we listen with a heavy heart to the latest news. Our thoughts and prayers are with the Ukrainians. We are inspired by their dignity, resilience and devotion to freedom.”

The storied house of Chanel held its PFW show at Grand Palais Éphémère, and the locale was decked out in tweed for the occasion. (Tweed is a staple “legacy look” from Chanel.) Vogue reports there was “an earthy light brown for the seats, black with shots of pop colors on the walls, and a pale green for the runway, which was designed to represent Scotland’s River Tweed.”

Virginie Viard’s latest show for Chanel played up the Scottish theme, with an emphasis on lush greens and earthy colors. The “weekend getaway” was an ongoing theme for the show, too, as models showcased looks you might imagine yourself throwing together in a carry-on suitcase for a quick jaunt to see your glamorous friends in the countryside. Boots, jackets, coats, and more made me feel already excited about planning autumnal trips later in the year.

Some of Chanel’s female models wore oversized, male-looking coats. And in a press statement, Viard – presumably explaining this choice – said, “There’s nothing sexier than wearing the clothes of the person you love. I’m fascinated by this ever-contemporary gesture.”