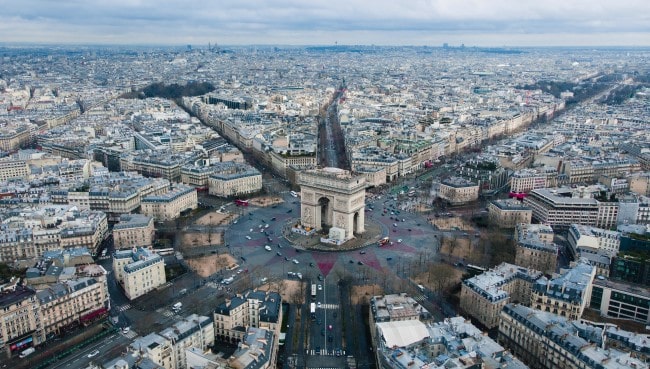 A parade of 2,022 sheep moved down the Champs-Élysées on Sunday afternoon. Entirely car-free for the day, the “world’s most beautiful avenue” hosted a transhumance of cows, sheep, horses and 350 artists from the Pyrenees. In conjunction with the Salon de l’Agriculture, the event was staged in order to shine the spotlight on the cultural tradition of the transhumance, the movement of livestock from one grazing ground to another in a seasonal cycle.

The city of Paris plans to ban car traffic in the city center (four central districts) by the year 2024. A recent Fast Company article details how the city has sought to reclaim the space currently taken up by cars, by increasing the number of bike lanes, pedestrianizing the quays of the Seine that used to be highways, reducing parking spaces, etc. The ambitious new low-traffic zone is expected to take 100,000 cars off the roads. In the meantime, French authorities are also seeking to tackle the noise problem on city streets (including those roaring motorcycles). The New York Times explains how France has installed new sensors, or “sound radars,” which can detect excessive noise and take photos of the vehicles. “At the end of the testing period, in 2023, the city plans to start handing out fines of 135 euros, about $150, to vehicles that break noise-level rules.”

People in a metro station during the Russian invasion of Ukraine, Kyiv 2022. © Wikipedia Commons, CC BY 4.0

Anti-war demonstrations continue in Paris amid Russia’s invasion of Ukraine. The war has forced more than 2 million refugees to flee westward into the European Union. As reported by Reuters, Paris Mayor Anne Hidalgo, who was at the demonstration at the Place de la Republique, “said it was important to deliver arms to Ukraine while also ensuring the conflict did not spread.” Donation sites have been set up around the city, Parisians are welcoming refugees into their homes, and some French volunteers are headed to the war zone to help as doctors and soldiers.

The Vladimir Putin wax statue has been removed from the Grévin wax museum after it was damaged by visitors. The museum is now considering replacing it with a statue of Ukrainian President Volodymyr Zelenskyy. The museum director said to France Bleu radio: “We have never represented dictators like Hitler in the Grévin Museum, we don’t want to represent Putin today.”

France will increase its defense spending in response to the Russian invasion. As reported by the Wall Street Journal, President Macron “called for a more sovereign and independent Europe to counter what he said is a new era signaled by Russia’s invasion of Ukraine.” France will welcome other European leaders for meetings in Versailles on March 10 and 11.

A gang of masked thieves stole €300,000 worth of equipment from the film set of Lupin, the popular Netflix series. As reported by the Guardian, “about 20 people broke on to the set after throwing mortar fireworks while the actor Omar Sy, who plays the protagonist, was performing in a scene… The robbery took place in a neighborhood in Nanterre, on the outskirts of Paris, on 25 February. After a short hiatus, filming for part three of the drama resumed on Monday.” Recently Sy celebrated the 10th anniversary of the hit film Intouchables at the César awards.

Last but not least, Paris Fashion Week has drawn the world’s celebrities and fashionistas to the French capital this past week. Refinery 29 has a rundown of all the street style trends that are going viral. To quote: “From colorblocked suiting and playful fringe to modern-day corsetry, the Paris crowd is losing their winter layers, and showcasing some of the warmer-weather trends we’ve been waiting months to sport.”