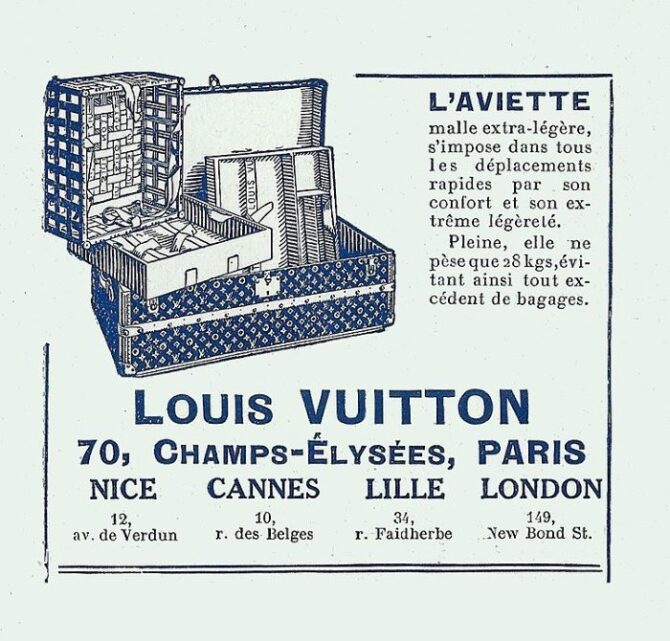 August may be a somewhat sleepy month in Paris – with most people away on vacation or simply quietly enjoying the last full month of summer in the City of Light – but August is a time of note in Paris’s fashion calendar: It’s when Louis Vuitton was born.

The fashion house was born in 1854, but the man himself, Monsieur Louis Vuitton, was born 200 years ago this month in 1821. Born on August 4, 2021, in Jura, France, Vuitton’s name has since become synonymous with luxe glamour, high-end leather bags made of brown and gold, and of course, that famous “LV” emblem seen across the house’s clothes and products.

As we celebrate the birth of Louis Vuitton this year, here are five noteworthy facts about the house of Louis Vuitton, and the man who founded his eponymous company in Paris centuries ago.

Most people hear “Louis Vuitton” and immediately think of high-end fashion, but Frenchman Louis Vuitton wasn’t thinking about high-end fashion when he started his business in the mid-1800s. Because of the rising popularity of train and auto travel, Vuitton capitalized on an opportunity: There was an increasing market for luggage and travel cases, like trunks. Vuitton’s business crew and crew, as luggage became a necessity for many, as well as a status symbol. Early customers snapped up Vuitton’s gorgeous waterproof trunks for travel. Prior to founding his own business Vuitton was a trunk-maker to Empress Eugénie de Montijo, wife of Napoleon III. Notably, Vuitton reportedly created the world’s first pick-proof lock for his luggage and trunks.

2. Vuitton Established His Business at 4 Rue Neuve des Capucines in 1854

Vuitton arrived in bustling, 19th-century Paris in 1837 and began to make a name for himself. He was an apprentice to Monsieur Marechal, who was a successful Parisian trunk-maker. Within several years, while still in his teens, Vuitton gained a reputation as being a highly-skilled trunk-maker himself. But it wouldn’t be until decades later, at age 33, that he’d open his shop in Paris in the 2nd arrondissement in 1854.

Years later, Vuitton began making handbags, which would become one of his signature items. All Vuitton bags are handmade, too. The company’s high standards for craftsmanship, the manpower that goes into creating each bag, as well as the fact that each bag is fireproof and waterproof are all factors reflected in a Louis Vuitton bag’s high price tag. The average cost range of a Louis Vuitton purse is $1,100 to about $6,000. And, like other luxury brands, you won’t find a Louis Vuitton item on sale. (That said, there’s always websites like Poshmark, where you can find gently used designer items for less, and sate your fashion fix.)

Today, you can find Louis Vuitton shops all over the world, not just in Paris.

3. The “LV” Emblem was Designed by Vuitton’s Son

Those famous interlocking “L” and “V” letters seen on the company’s signature handbags were created by Georges Vuitton, Louis Vuitton’s son, in 1896. Louis saw this as a way to cement the branding of his burgeoning luggage business. Today, it’s arguably the most recognizable fashion emblem in the world, alongside other fashion houses’ logos like Chanel’s double “C”s, the Hermès horse-drawn carriage, and Gucci’s “G”.

4. The House Has Some Majorly Famous Fans

It’s no surprise that an iconic Paris fashion house has a fan in many prominent people. The Louis Vuitton name carries almost as much weight as Paris itself. At its fashion shows, Louis Vuitton is regularly stacked with celebrities. At the Fall/Winter 2021 show, for instance, tennis superstar Naomi Osaka and actress Jennifer Connelly were both in attendance and reveling in the looks of the season.

And speaking of famous faces, Cruella actress Emma Stone was the face of LV’s latest fragrance campaign for Coeur Battant. The powerhouse actress was featured in an incredible advertising spread that showcased her signature impeccable style – noted for its mix of simplicity and modernity – against a backdrop of gorgeous, pastel flowers. Coeur Battant is the fashion house’s 10th fragrance in the collection Les Parfums Louis Vuitton.

Stone has also appeared modeling LV’s clothes and showcasing their high-end bags in ad campaigns, like the one for LV’s “Spirit of Travel.” Actresses Alicia Vikander and Léa Seydoux have also been tapped as celebrity models for recent Louis Vuitton campaigns.

Previous Article Annette: A Diva Is Killed, and a Star Is Born
Next Article Le Dîner d’État, a Tool of French Soft Power