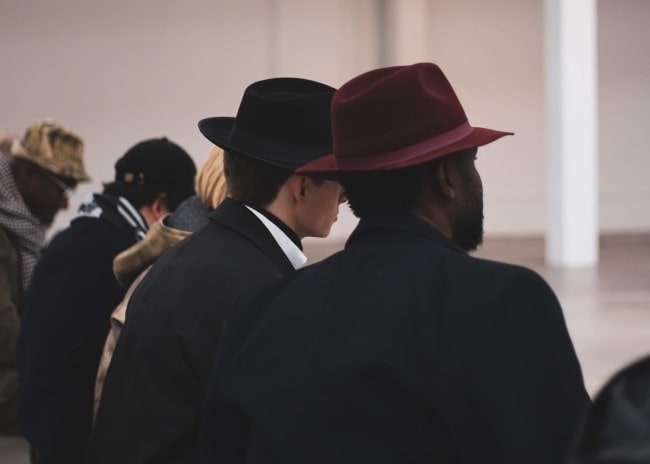 Fashion is always future-forward, quite literally – the industry works a year ahead, which means last week’s Paris Fashion Week featured menswear looks for Spring 2022, and everyone’s buzzing about it. The new collections highlighted the colorful, playful tones that hopefully lie ahead for next year as we fight through – and eventually, emerge – from the pandemic. Here are a few of our favorite collections from the Spring 2022 Menswear shows in Paris last week.

The 52-look collection featured an array of light purples and deep blush pinks, along with plenty of black to boot. Models wore large hats, large sunglasses, and big billowy trousers. Knit colorful sweaters – equally perfect for a day out in the French countryside or an afternoon at a cafe in the 5th – boasted bright greens, more purples, and even a look-a-like for an emoji. Dior is known for its bags, and many of the male models carried a purse or a bag as they strutted down the runway. This was a show that wowed critics, and Scott and Jones’s collaboration was a clearly shrewd, smart fashion move.

Over at Lanvin, the French house hammered home a steadfast fashion truth: Eventually, everything comes back into fashion. The art of fashion is a cyclical endeavor, and that’s why 90s style made such a huge comeback over the past few years and even still today. From baggy, wide-leg jeans to choker necklaces to crop tops: It’s like we relived the 90s all over again. Lanvin reached back into fashion’s archives this season and channeled the 2000 Leonardo Dicaprio film, The Beach, for their latest show, which was a digital affair. Looks including bucket hats, flower prints, butterfly designs, and thick-brimmed sunglasses recalled the early-aughts style featured in every teen movie of that era.

The show featured playful and mischievous looks, like negligees, skin-tight bodysuits, and more. Sportswear abounded during the collection, which was fitting, as the pandemic lifestyle means we’re all spending way more time at home, working, lounging and living, in loose, comfortable clothes like sportswear.

It’s been called an “exceptional” collection, and it’s easy to see why. Hermès – best known for its iconic purses, like the Birkin Bag, and its trademark orange scarves – navigated its Spring 2022 Menswear collection with ease, thanks to Véronique Nichanian, the chic designer who heads the house’s menswear collection. Paris-born Nichanian has been with the luxury fashion house for over 30 years yet manages to make each collection feel bold, new, and fresh.

Her latest collection for Hermès included 41 looks, which is a relatively slim offering for fashion week, but it was intentional. “I prefer not to have too many garments, but to have the right ones,” says Nichanian. The collection, titled “Double-Jeu” (or, “Double Game”), featured warm-weather color pairings like white-on-white, pale greens, sunny yellows, and blush pinks, calling to mind a blossoming spring garden in bloom. Belts made of rope and hooded rain jackets both alluded to a sailing theme – a spring of water play. And an ombre sweater of gray melting into Cyan blue was a fan favorite (for this writer, anyway). Hermès’s show highlighted the diversity of models on the runway, which felt authentic and most certainly welcome.

Louis Vuitton’s Virgil Abloh did not disappoint this year and that was evident from start to finish of this season’s Vuitton show. Tracksuits and sneakers, along with smartly tailored suits, were top of mind for Abloh, whose creativity delighted. Abloh’s innovative style kept “LV” history alive, too, incorporating the brand’s trademark luggage with brown leather and golden LV’s. Colors like blacks, electric blues, and bright greens were prominent, along with tall, noteworthy hats worn by models.

Abloh dubbed his show “Amen Break,” a nod to a drumbeat break by 1960s soul group, the Winstons. Abloh tells Vogue of the name choice, “I called the collection that because I think it’s so profound: this idea that something can be iterated on by so many artists in so many songs to the point where it melts away. They weren’t compensated for it, by the way. And people don’t know that the drum pattern in their favorite song was from a very specific soul song — and it’s a sampler that makes it possible.”