Couture Week hit the Paris runways in early July, following Menswear Fashion Week. And the fashion weeks could not have been more different.

Couture is known for being the area of fashion that fully embraces its ostentatiousness and frivolity. Couture dresses can cost hundreds of thousands of dollars and are more commonly seen on runways and red carpets than anywhere else. Still though, there’s a place for haute couture in our culture; and there’s especially always a place for haute couture in Paris – a city that celebrates life’s finer things to the max.

Dresses seen in haute couture shows can take hundreds of hours to sew and create, and the lengthy-ness of time spent was certainly reflected in the dresses shown by Dior. The looks at Dior focused on an Old Hollywood type of glamour, with classic 1940s and 1950s silhouettes. Greens, blacks, beiges, and rose pinks were the color palette mainstays. Dresses touches the ground, and long earrings dangled from models’ ears as they marched down the makeshift runway at the Rodin Museum. The looks were all regal and elegant, yet fun and fresh.

At Iris van Herpen, a line created by a Dutch woman of the same name, her intergalactic outfits transported show attendees to another dimension. Models wore dresses that looked like they belonged on a character in Star Wars or Star Trek (albeit, a very chic character). The designs were breathtaking, and gravity-defying. Herpen’s one-of-a-kind looks played with shape and structure in a new and unusual way. When I read that she interned under the late Alexander McQueen, who was also known for his one-of-a-kind looks, I thought: Ah, that makes sense. (After all, like attracts like.)

Another late fashion icon, Sonia Rykiel, made her mark this week too, by way of her eponymous fashion house, of course, which carries on her name. The Rykiel house paraded new looks, making great use of the ever-classic French color: black. Models wore strange contraptions on their heads, which looked like birds nests dotted with little colorful flowers. Then there was the white cape coupled with a bustier and jeans and black boots, which threw the theme from couture to Madonna music video.

There was more fashion from the Dutch with the show of Ronald van der Kemp, whose looks were bold and striking and bright. It was a veritable hodge-podge mix of looks, including floor-length gowns paired with top hats, plaid pants and bomber jackets and combat boots, off-the-shoulder black velvet dresses, and sweeping gold dresses fit for an episode of Dynasty.

Schiaparelli’s show was held at Opéra Garnier. The label’s Design Director, Bertrand Guyon, told Vogue that for the looks in this show, he drew inspiration from Schiaparelli herself, from “her personality and her life.” The Schiaparelli show possibly took the cake for the most outlandish designs, which included a rainbow fur coat with flower power pants, a lion outfit that looked like it belonged on Broadway on a Lion King cast member, and statement-making steampunk dresses in dark blues and blacks.

That’s one of the great things about couture: without the confines of having to make fashion for the people (as is the intent with Ready to Wear shows), the creative juices flow and let loose to give us some truly remarkable looks, like lions in high-heeled shoes. 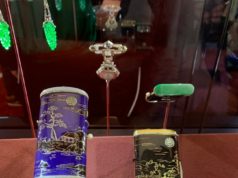