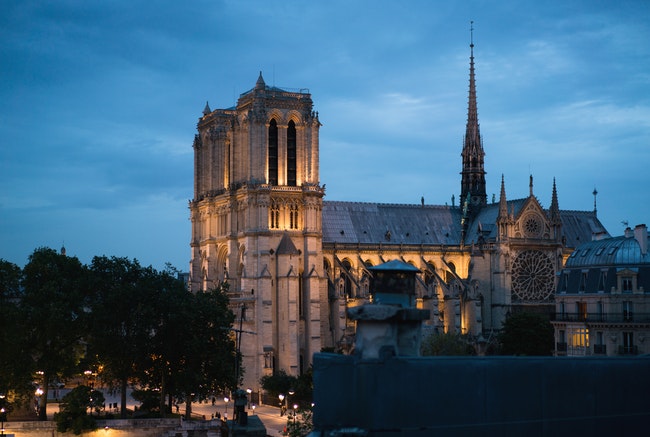 On Good Friday on April 15, exactly three years after the horrific fire that devastated Notre-Dame de Paris, people gathered on the parvis in front of the cathedral to attend a prayer for peace. “We think especially of those who are victims of the war in Ukraine,” declared Mgr Georges Pontier, apostolic administrator of the diocese of Paris, at the opening of this ceremony. The parvis can accommodate between 600 and 1000 people and it had already filled up at 11 am before the 12:30 pm ceremony. While the beloved landmark is under renovation, the investigation into the causes of the disaster is still ongoing. President Macron visited the construction site in the afternoon.

#OTD 15 April 2019 The cathedral of Notre-Dame de Paris in France is seriously damaged by a large fire. pic.twitter.com/u9mKcz7taL

Remember when we told you about the recent archeological find beneath Notre-Dame? Well the Agence France Presse has revealed that the mysterious sarcophagus will soon be opened. To quote: “It is currently being held in a secure location and will be sent “very soon” to the Institute of Forensic Medicine in the southwestern city of Toulouse. Forensic experts and scientists will then open the sarcophagus and study its contents, to identify the skeleton’s gender and former state of health, lead archaeologist Christophe Besnier said, adding that carbon dating technology could be used.”

A mysterious leaden sarcophagus discovered in the bowels of Paris’ Notre-Dame cathedral after it was devastated by a fire will soon be opened and its secrets revealed, French archaeologists said https://t.co/n4eNAUHVVf pic.twitter.com/U7beEPpSmp

Les petits rats, as the young pupils are called at the School of Dance of the Paris Opera, have returned to the stage after two years of absence linked to the pandemic health crisis. At last the dancers could retrieve their costumes from the vestiare to perform the two-hour show at the renowned Palais Garnier.

The presidential runoff is fast approaching in a tight race between Emmanuel Macron and Marine Le Pen. The incumbent president is still the favorite to win next Sunday’s election but it’s going to be close. All eyes are on the second round, particularly as most members of leftist candidate Jean-Luc Mélenchon’s party have said they will abstain or leave their ballot papers blank. Pollsters have predicted a potential record abstention, with a malaise gripping the nation with some angry at having to vote for the “lesser of two evils.” At a campaign rally on Saturday, Macron gave a green pitch, focusing on his environmental accomplishments and future plans for the climate, in an effort to woo these voters. As explained by the Associated Press, “Marseille’s young voters, who leaned mainly to the far right and the far left last Sunday, are particularly engaged with climate issues — a point which Macron hoped to capitalize on in a rousing speech at the edge of the glistening sea… Macron said his next prime minister would be placed in charge of environmental planning as France seeks to become carbon neutral by 2050.”

Meanwhile climate change activists occupied the Porte Saint Denis in the 10th arrondissement, completing blocking the surrounding square. According to Reuters, “The Extinction Rebellion (XR) had said on its website that it planned to block a major Parisian location to disrupt the electoral cycle and its “business as usual” attitude.” In this last week of campaigning, France 24 reports that Macron is venturing into “hostile territory” in order to be close to the people. To quote: “[his] second-round campaign strategy is markedly different from the approach he took ahead of his first presidential election duel against far-right candidate Marine Le Pen in 2017, as he criss-crosses the country – often visiting hostile terrain – as he tries to banish a perception of haughtiness among parts of the electorate.” Meanwhile far-right candidate Marine Le Pen has been accused of embezzlement while serving in European Parliament. As reported by The Guardian, “The European Union’s anti-fraud body has accused Marine Le Pen and several of her party members – including her father – of embezzling about €620,000 while serving as members of the European parliament. France’s investigative website Mediapart published a section of the new 116-report alleging that the MEPs misused EU funds for national party purposes.”