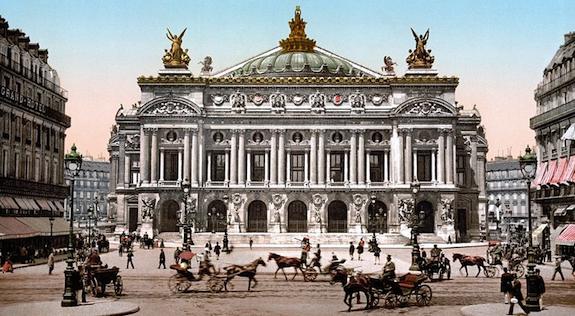 In 1860 a little-known 35-year-old architect by the name of Charles Garnier won the competition to build Paris a new opera house.  Launched under the auspices of Emperor Napoleon III and his civic planner, Baron Haussmann, the contest attracted 171 proposals and was part of the duo’s plans to remake their capital.

The old Paris opera house, located in a teeming, insalubrious part of the city on the narrow rue Le Peletier, had been the site of an 1858 assassination attempt on the emperor’s life. He escaped unscathed, though his horses, eight innocent bystanders, and over a hundred wounded were not so lucky. It was then that Napoleon III resolved to build Paris a new opera house as magnificent as a palace, with a well-guarded private entrance for him and his family. The new Opéra would reflect his neo-Baroque tastes as well as serve the needs of the bourgeoisie who supported him. Young Garnier won the bid, clearly willing to gratify these desires: His proposed opera house would mount spectacle within spectacle. It would be the place for the rich and powerful to see and be seen in keeping with France’s late 19th century, post-revolutionary, industrialized society. Observed through this lens, it is easy to view Garnier’s Palais Opéra as a ‘sign’ of its time.

19th century Paris: opera was the place to see and be seen

In late 19th century French society, you did not go to the opera, or even the dance hall, to view the mastery and grace of the world’s next greatest artists. No. You went to show off your wealth; to display your power; to be aroused. You were a man, évidemment, and you went to the Opéra accompanied by your beautiful mistress, if not your wife, her slender neck and ample bosom, dripping with gemstones, the bigger the better. If you did not yet have a mistress, you might go to the Opéra to pluck one out of obscurity from among les petites danseuses, the girls of the ballet. 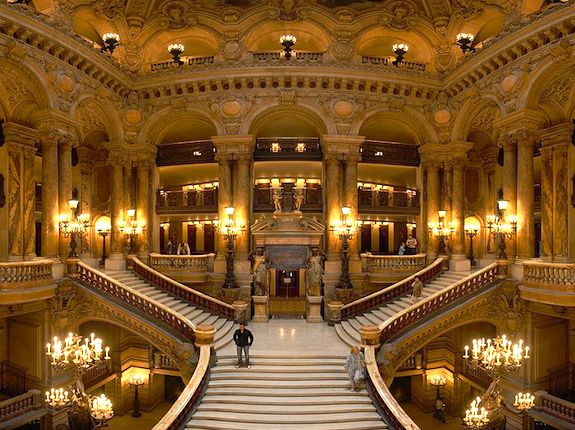 In Garnier’s day, ballet dancers never came from high society, but from the lower, impoverished classes, most often with a mother’s cunning patronage. Becoming a dancer was a way out of poverty for many a young girl in late 19th century France.  It was her chance to be discovered by a man of wealth and to be kept, for lack of a better word, until her beauty and charms began to wane. And even if they already possessed the most beautiful and witty mistresses in town, Paris’s wealthy elite came to the Opéra to take care of business and enjoy the ballet – the Act II dance classique of each performance – for the thrill of watching young girls wearing minimal clothing raise their long, graceful legs.

Have you ever noticed that Wagner’s opera, Tannhäuser, boasts a “Paris version”? The story goes that before its 1861 Paris debut, the composer was required to insert a ballet into the score, according to the traditions of the Paris opera. He complied, placing it in Act I where a ballet made most dramatic sense.  However, it was also tradition for French opera goers of that time to dine during Act I, watch Act II for the inevitable ballet, and then take their leave before the conclusion of Act III. Thus, Wagner’s masterpiece flopped in Paris.

Opening in 1875 after 15 years of construction plagued by such monumental setbacks as the discovery of an underground lake beneath its future foundations, the 1870-71 Franco-Prussian War and Siege of Paris, the Paris Commune and ultimate fall of France’s second Empire, and an 1873 fire, the Opéra Garnier finally became what its creator had intended: a place for fun and fêtes and fantasy among the world’s super rich. The building was part palace, part temple, part administrative center; a space where money was the new king, the new power, the new god. 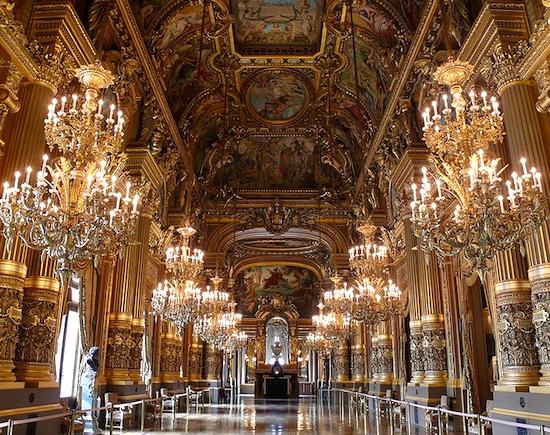 The spectacle began, not as the curtain was raised, but much earlier as you climbed the steps and entered the vast and richly decorated multiple foyers, each one grander and more exquisitely ornamented than the one before. You would mount the grand staircase of multi-colored marbles harvested from the four corners of the former Empire, awed by its smooth touch and curving, continuous lines. You would stop at one of the first-floor balconies to catch your breath and to look down upon the other patrons as they looked up at you, each one canvassing the room for who had the most dazzling partner and which one wore the most extravagant gown. Eventually, you would all brush elbows in the sumptuous Grand Foyer, its splendor rivaled only by that of the Galérie des Glaces, the Hall of Mirrors, at Versailles.  You might take a turn on the outdoor terrace to exhibit to the crowd below what they were not and would likely never be part of. Men knew then who needed to tip their hat to whom, and who need not touch his hat at all. And once all the hat-tipping and gown-ogling and deal-making was done, you would repair to your subscribed loge – the more centrally located, the more expensive, of course – to dine with your private party as the curtain dropped and the less important of the two spectacles, the stage presentation, began.

Thus was the Palais Garnier strategically situated at the epicenter of international trade, tourism, and finance, close to La Bourse, les Gares, les Grands Magasins, and of course the latest in the world’s finest luxury hotels. No expense was spared in its construction, knowing full well that its clientele would be the foremost financiers, entrepreneurs, and industrialists of the day. Though critics chided the edifice as too complicated – a “Turkish bath” –, it was a visual feast in the eyes of its subscribers, les abonnées, whose society it symbolized, revered, and abetted at least, that is, until 1914 when the world was shaken and changed forever.

The Opéra Garnier remains today an iconic symbol of the city of Paris, not just for its magnificent façade and splendid interior, but for the era it represents: a France that had weathered a century of disruption and revolution and was now on top of the world, leading the march toward the future. Viewed through this lens, it can surely be said that the Palais Garnier is a ‘sign’ of its time.

Tickets give admission to the public areas. As of May 2019, full price ticket price: €14 / €12 (outside exhibition periods). Children under 12 are free. It’s possible to book tickets online.