As Black Lives Matter protests continue to roil the U.S., we’ve learned that similar marches in France weren’t just sympathy events. The death of a young African-descended Frenchman had already stirred controversy. The BLM movement recalled other police violence in the country. What a French minority artist might do with this burning issue has been a tantalizing prospect. Tout Simplement Noir was directed by the rapper-actor Jean-Pascal Zadi (co-directed by John Wax). It’s fiction, but Zadi uses the mockumentary format. We’re led to expect radical meta-cinema on the order of Borat, but we soon settle into something more like the Beatle parody This is Spinal Tap, featuring a host of media personalities playing themselves. Still, the film raises interesting questions about the confluence of race, class and media in France.

The big idea of JD (the fictionalized Zadi), and the plot of the film, is to organize a demonstration by exclusively black men, similar to Louis Farrakhan’s Million-Man March. He also plans to read a manifesto outlining the grievances of the black male in contemporary France. There are hints he’s doing this to boost his own celebrity as well—in this day of social-media self-branding it’s impossible to separate the two. Unsurprisingly he has a cameraman follow him to make a documentary about his great-achievement-in-the-making.

It’s the camera that gets him into trouble when he starts cold-calling celebrities, or as the French say, les People—more precisely les People of color. When he accosts a stand-up comic (Claudia Tagbo) in her dressing room, or another performer (Fari Lopes) leaving his venue, the camera makes them suspicious. Maybe the celebrities don’t wish to give up their image without a cut. But in the age of video surveillance and cell-phone filming of police and others, this is another cogent point being made by the director.

The interactions can be funny, even trenchant, but often seem contrived. When he speaks to Ms. Tagbo, and she agrees to help, would he really choose that moment to criticize the stereotypes in her act? Would he bother to interview a North African entertainer and his Jewish colleague just to tell them they’re not welcome in the march? The sketches, which is what they are, often end in acrimony. One meeting with two show biz personalities results in slapstick fisticuffs. This gets tiresome—the worst is director Mathieu Kassovitz auditioning Zadi and trying to bring out his “authentic African character”. It’s a clever premise but degenerates into Kassovitz hamming it up—the kind which telegraphs that the person doing it is just a nice guy putting us on.

Fary plays himself as a smooth operator, who both sympathizes with Zadi and the cause but smells an opportunity. At first, this seems like more schtick. But surprisingly the relationship deepens into Don Quixote and Sancho Panza camaraderie, although this Panza is more hip, not to mention sly. He’s already looking beyond the march to a film, with him as director and Zadi as star: Black Dentiste.

Underneath all the comic business is the debate between traditional French “universalism”, which pretends race doesn’t exist, and identity politics, often condemned in France as “communitarianism”. Zadi stacks the cards in favor of the former, setting himself up as a black-consciousness straw man. The celebrities maintain that they should be defined strictly in terms of their vocation—a journalist (Kareen Gulock) explodes when Zadi insists on calling her a black journalist and not just a journalist. This brings up the complicating notion of class—and whether the minority of the minority who’ve moved up the ladder are qualified to speak on behalf of the underprivileged living in les quartiers.

The way Zadi frames the debate, as a contest of abstractions—exclusiveness vs. inclusion, race vs. gender—has been overtaken by reality. The concrete tragedy of Adama Traore’s death has resulted in a woman, his sister Assa, leading a movement against violence striking mostly black males. Demonstrations have been mostly minority-attended or not, without being officially defined by organizers. And the action is not in Paris, but in the banlieues—the go-to movie in this regard is the flawed but impressive Les Misérables.

The most affecting moments in Tout Simplement Noir come when Zadi drops the comic mask. Then he seems as confused and dejected as the rest of us. Not always: the scenes with his white partner (Caroline Anglade) and their mixed-race son are a bit sentimental—we can’t believe no problems would arise from his monomaniacal devotion to the march—with that icky quality of comic actors when they play it straight. It’s also another instance of our supposed polemicist stacking the cards. More ambiguous and powerful is a quiet scene with Zadi’s father (Nicodème Zadi), a real African, kindly but dignified and stern, who refuses his son’s offer to attend the demonstration.

There’s a scene of Zadi being arrested towards the end. We wonder if it was tacked on in light of events, at any rate it feels that way. In the scene, the police violently arrest Zadi for no apparent reason aside from his militancy (worse things happened during J. Edgar Hoover’s Cointelpro campaign). But he walks out of the police station unscathed. When the march finally happens it’s hardly the earth-shaking event he’d hoped for, which is realistic enough. On the other hand, bringing along his partner is left unexplained—it’s just a muddled feel-good move. When his father attends after all, it winds things up on a poignant note. But part of me was saying, “Pops, say it ain’t so!” 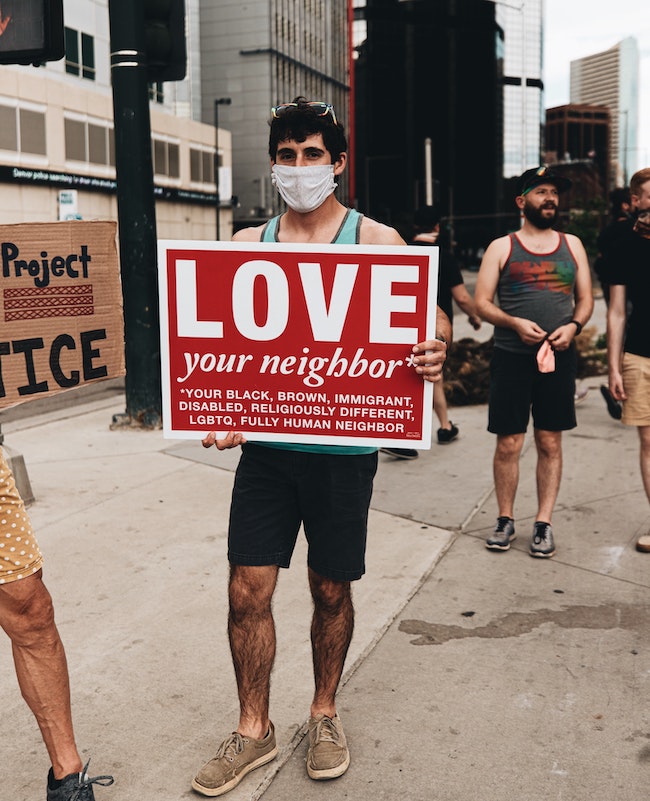