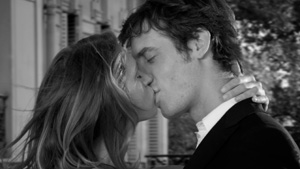 Are silent black-and-white movies the new trend in cinema? After The Artist comes Le Petit Nuage (The Little Cloud), a short film that is one of the episodes in 7 Short Films About Love, an on-going omnibus film project collecting several stories about love, which are filmed in different countries (the next segment is set to be filmed in Italy).

As it happens, Renée George, the director behind Le Petit Nuage, actually worked as a Best Boy Electrician on The Artist, and thought of her own creation as a bit of a homage: an American’s movie about love in Paris in response to a Frenchman’s film about Hollywood. But her movie is, if not better, more interesting. It opens with archaic stylistic flourishes reminiscent of silent filmmakers like D.W. Griffith or the Lumière brothers, and gives us the sinking feeling that the movie will be yet another pastiche. It then veers to a more contemporary feel as it depicts a darkly handsome man (Joffrey Platel) and a young woman (Sarah Demestre) sitting on the outdoor terrace of a café. They make eye-contact and click. So far so perfume commercial, except that the actors have a real screen presence.  Sarah Demestre is one of those French women who seem perfect precisely because of their imperfections, the mouth too wide, nose just a tad too hooked. Instead of being corrected, or using cosmetics to cover up, the traits are brought out as what makes the woman attractive and herself. 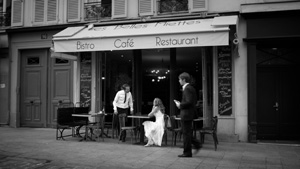 While the movie seems to harken back to silent film, it’s not quite ‘20s-comedy-and-adventure like The Artist, but more similar to the lyrical love stories of Griffith (Broken Blossoms, Way Down East) from an even earlier period. The ambiguous black-and-white images of Paris, accompanied by an emotional but foreboding cello, call to mind an even odder analogy, Chris Marker’s post-apocalyptic La Jetée, which was composed of a series of black-and-white stills and an eerie soundtrack. This may be stretching the references to the breaking point, but it gives an idea of the evocative quality of George’s film. (BTW: Marker’s short masterpiece is available on You Tube, with English subtitles.) 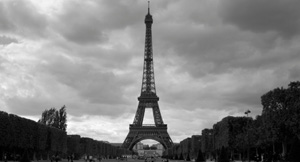 In the hands of a lesser filmmaker, the love story might have lapsed onto the level of Artist-style charm-in-your-face— there’s even a dog (it looks suspiciously like the one in The Artist, and brought out the W.C. Fields in me), and a couple of cute toddlers. But the restless movie veers off again, this time to Marc Chagall territory—the clouds, as the couple flies up and away to a fantasy that captures the delirious first moments of a rapturous romance. The young lovers will crash back to earth in a way that is grimly parodic and can be interpreted variously: Interference of politics? Sexual politics? History? You decide. The couple ultimately comes back together again, strangely (maybe symbolically?) crossing from a retro-looking Paris to someplace that looks more modern and accommodating. In the end, love in Paris can’t help seeming a bit like a perfume or wine commercial, but Le Petit Nuage is also poetic and meditative, with lovely camera-work by Stella Libert, and atmospheric music (by Robert Casal and the director).

This first installment of 7 Short Films About Love will be screened in Paris in May.  You can see a 30-second trailer of the film on Facebook. 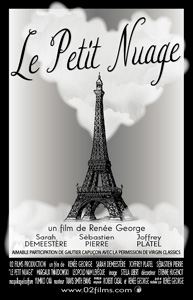