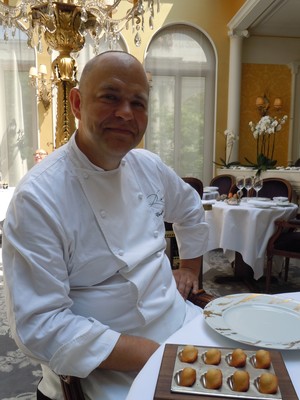 Christophe Moret took over the kitchens of restaurant Lasserre in 2010. Trained by Alain Ducasse, he honed his craft in Monaco at the Louis XV, then in Paris where his innovative Asian-fusion dishes at Spoon meant it was almost impossible to snag a table. From there he went to the Plaza Athénée before taking on the challenge of Lasserre, a 70 year old culinary flagship with an incredible backstory. Moret says influences come from organic producers all over France and from his mentors Alain Ducasse, Bruno Cirino and Jacques Maximin.

What are you most proud of in terms of your own achievement?

Motorbikes: I’m passionate about them, if I wasn’t a chef I’d be Valentino Rossi!

Where were you born?

Orléans, in the Loiret region.

If you could share a coffee or bottle of wine with a fellow Parisien past or present who would it be?

The most Parisian of New Yorkers, Woody Allen, I adore his take on France and his incredible humour.

There are too many to single one out.

The eclectic architecture, the mix of styles from each century

What’s the one thing every Parisen should own?

A designer pepper mill: to spice up their lives!

An Item you can’t live without?

Any pet hates about Paris

It’s a beautiful city, I hate to see people throwing rubbish anywhere but in the trash-cans that are dotted all over the city. Also when they say, “French cuisine is no longer the reference it was”. Ridiculous!

Favourite Place to go for lunch in Paris?

Best address for coffee or drinks in Paris?

Bars or brasserie that feel/look authentic, in Paris you’re spoilt for choice

Where do you shop for clothes?

Any boutique that stocks my favourite Levis 501

Epicerie de Longueil, 28 avenue de Longueil at Maisons Lafitte. It’s a family owned grocer, since 1880, with products from the four corners of the hexagon and a superb wine cellar.

Your favourite neighbourhood in Paris?

Most fun thing to do in Paris ?

What’s the “touristy” thing you’d secretly like to do in Paris, but haven’t?

A private guided visit to the Musée du Quai Branly

Le Louvre and the Musée Rodin. Whenever I can I go there for the gardens which are magnificent and you can picnic on the grass: dejeuner sur l’herbe! Sublime!

Three words to live by?

One thing you would change about the world?

Poverty and its’ exploitation

One thing you wish Parisians would stop moaning about?

The fact that they refuse to stand in line, always pushing to be front of the queue. Stop moaning that everywhere is too crowded, and stop being so aggressive.

I would buy a ticket for the theatre or a spectacle.

Ravage de Barjavel. A sci-fi fiction novel written by René Barjavel, set in 2052 France. It was first published in 1943 and I think it’s called Ashes, Ashes in English

Rome. An exceptional city, la dolce vita in all its’ splendour.

Is there an annual event like a festival, gala, or an exhibit that you look forward to every year?

The FIAC contemporary art fair at the Grand Palais and lots of “off fair” exhibitions, for its’ energy, diversity and discoveries. 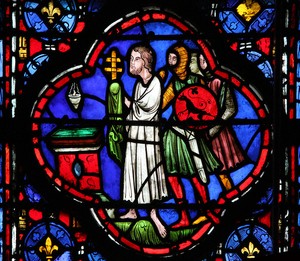 La Saint Chapelle : A royal medieval Gothic chapel, located near the Palais de la Cité, on Ile de la Cité in the heart of Paris. Damaged during the French revolution, restored in the 19th century, it has one of the most extensive in-situ collections of 13th century stained glass anywhere in the world.

Previous Article My Potted Plants Have Sad Faces
Next Article Photo of the Week – June 14, 2013

François Perret: The Madeleine Maestro at The Ritz Paris