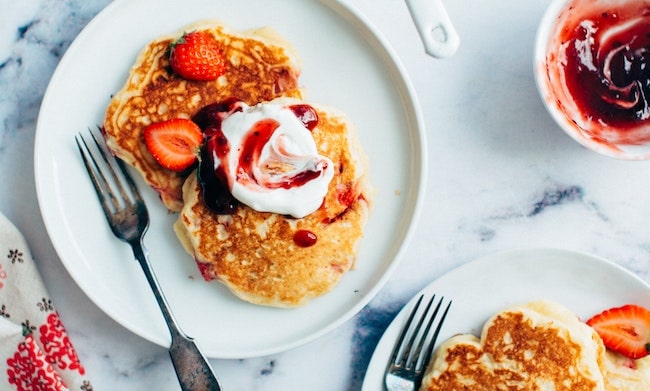 Second. What a wonderful writer!

Last. (But certainly not least.) What a wonderful human being! Craig Carlson, that is—the author of Let Them Eat Pancakes: One Man’s Personal Revolution in the City of Light.

But let’s get back to the book: Let Them Eat Pancakes is Carlson’s second book, in which he continues to tell the story of his life in Paris that he began telling in Pancakes in Paris: Living the American Dream in France, which BP reviewed here.

Carlson is the founder and owner of the popular Breakfast in America diners in Paris (there’s one on the Right Bank, one on the Left). And while the subtitle of the first book alludes to living a “dream” life, one of the great charms of Carlson’s storytelling is the sense of humor that characterizes these books as he describes just how hard it has been at times to realize that dream, and continue to keep it alive.

Follow @pancakesinparis to keep up to date with Breakfast in America’s owner and founder Craig Carlson! The end of the summer will see the launch of his memoir, “Pancakes in Paris” which tells the story of how Craig dreamt up what became the most popular American diner in Paris!!

Unfortunately, I have not yet read Pancakes in Paris, so I’m not able to compare the two. But I can tell you that after having read Let Them Eat Pancakes I’m hungry for more. (Sorry, just couldn’t resist…)

What I can tell you is that Let Them Eat Pancakes is an absolute delight. And while the genre is memoir, and the main focus of the memoir is on Carlson’s life in Paris, there are many unexpected detours along the way, that include peeks back at his life in the U.S. And those peeks gave me a deep appreciation for the considerable courage and imagination that led the author from a decidedly unprivileged childhood to the life he is leading today.

The nature of his difficult childhood comes out only gently, and gradually. What one notices first is his ability to bring characters vividly to life. For example, early in the book we get to meet his two immigrant grandmothers, one Polish, one Finnish. And we are instantly drawn into the story of not just Carlson’s life in Paris, but the life that led him there as well, starting out in a Connecticut town somewhat prophetically (as it turns out) named Frenchtown. In just a few words we get a very clear sense of what one of his grandmothers was like:

As for my Polish grandmother on my mom’s side, sadly her immigrant story was buried with her. Unlike my Finnish grandmother, my grandma Mary did not want to talk about her childhood in Warsaw…

The conventional wisdom is to think parents play a major role in forming successful, happy adults, but in Carlson’s case, it must be said that his parents didn’t give him much help along the way. At the age of four he and his three older siblings were taken to an orphanage where they stayed for a year, even though both of their parents were alive. His mother was frequently hospitalized for mental illness, and it would appear that his father was just not that interested in raising children.

Carlson skips lightly over the details of what has to have been a pretty turbulent childhood, but does tell us that one day his father announced to him that he was moving in with his girlfriend, and that he was now on his own. Which meant that, for a time he was a homeless 16-year-old.

What is most amazing (to me, anyway) is the matter-of-fact way he recounts all of this. There is not an ounce of self-pity in this book. Somehow he overcame these very difficult circumstances, and managed to retain a fundamental decency and kindness, and even a somewhat astonishing ability to view his parents with compassion and understanding rather than bitterness and anger. And went on to build a wonderful life for himself.

I think it’s important to stress that the difficulty of his early life is by no means the main focus of the book: it is just one of the threads making up the tapestry, and he tells only as much of “all that” that is necessary because it was real, it happened, and it is part of what formed him. (In other words, this is not a memoir about a difficult childhood: the difficult childhood is background; it is not dwelt upon.)

Another surprise for me was the amount of really practical, helpful information contained in this book. For example, I found perhaps the most helpful tip about dealing with the difficulty of learning the gender of nouns in French that I have ever come across. (And no, I am not going to tell you what it is: buy the book, people!!)

I will share with you, however, an invaluable piece of advice that Julien, Craig’s French husband, gives him when he is about to go ballistic over a frustrating situation with French bureaucracy. (Never mind the details of why: many of us have been there, right? It doesn’t matter what the specific reason is.) Here it is:

Barely ten seconds in and already I could feel my blood pressure going up. Julien, of course, was unfazed. Being a Frenchman, he intuitively knew how to handle fonctionnaires. “Just stick to the facts,” he’d said to me before we left our apartment that morning. “Never question or contradict them. And the absolute cardinal sin: never show weakness or emotion. That’s when they go in for the kill!”

In these pages you can also learn, if you so desire, how to hunt for snails (and when it is legal to do so), and prepare them as that wonderful Burgundian delicacy, escargots. The author also sprinkles the text with the French words for various things, which at first I thought might be off-putting for some readers: but then I decided, who cares? To many more readers (I suspect) it is a good way to learn useful new vocabulary.

I’ve barely even mentioned the author’s self-deprecating sense of humor, and his ability to paint a scene that is vivid and often laugh-out-loud funny. For example, he describes one day chasing down a customer (“the anarchist” he calls him) who felt he had the “right” not to pay for the breakfast he had just consumed.

I turned to my young American waitress, and said “Hold the fort! I’m going after the anarchist!” A look of panic crossed her face. She’d never seen a real anarchist before.

A slow-speed chase ensued. Two angry, middle-aged, out-of-breath white guys. Somehow the anarchist managed to always stay a couple steps ahead of me—just out of reach—as we made our way across several arrondissements…As I watched him disappear around the corner on the other side of the [rue de Rivoli], I knew I had no choice but to follow suit. The moment I put my foot onto the busy boulevard, I suddenly understood the appeal of anarchy. What a thrill it was to break the rules, to do whatever the hell I wanted!

If you want to know the outcome of this little story, you will have to buy the book. Trust me: it’s worth it! (And I haven’t even mentioned the whole saga of the Pigeon Man…or the nail-biting suspense of finding out whether the author would be sued by Rodger Hodgson of Supertramp for naming his restaurant Breakfast in America…) Among so many other amusing tales…

Careful readers will note that the reference to anarchy connects rather neatly with the subtitle of the book. Of course I don’t want to spoil anything, and I won’t. But I will say this: that in the final chapter, which involves a train trip across much of the U.S. as he and Julien go on a promotional tour for Pancakes in Paris, the same spirit of affectionate concern that he has shown for his flawed, neglectful parents characterizes his thoughts about his homeland as well.

And I don’t think it’s revealing too much to say that the closing words are “Vive la Revolution!”

Of course if you want to know exactly what he means by that, you will just have to buy the book. And you really should.

Purchase the book at your local independent bookstore (in Paris we recommend The Red Wheelbarrow and Shakespeare & Company), or on Amazon through this link.