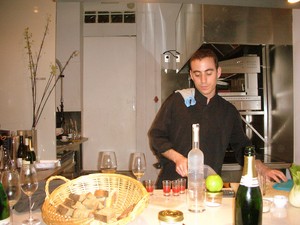 Maybe two years ago, Le Figaro’s crack gastronomy staff made phone calls to see how far out about 10 well-known restaurants were booked. And to their surprise it was not l’Astrance or Le Cinq but Spring that was impossible to book.

I guess I was not surprised because I had been going pretty much from its opening, and with 16 covers, I knew success would result in long waits. Did that stop me from raving about it? No.

Indeed my charming ex-cohost on eGullet took me to task in her most diplomatic way and suggested I was going a bit far in my adulation.

Sometime later a nice little place (the Table d’Eugene) opened in my neighborhood (which sorely lacked a fine restaurant or bistro) and the RFC and I went and had a spectacular lunch, which both of us raved about and I been revisiting it every other month or so, having no problem booking, until last month when they said “Sorry, we’re full.” “Full, this is one of the guys who raved about you.” “Sorry sir, that’s the way it is.”

Earlier this week, I was talking to my oldest American friend living in France, ah maybe better to say the American who has been living the longest in France that I know. She said something like “You’ve been taking me to some pretty crummy places lately, pick a good one this time, and you know, my son tried to get into the Table d’Eugene and couldn’t; it’s booked up way in advance.”

So there goes another gem down the road to the impossible. 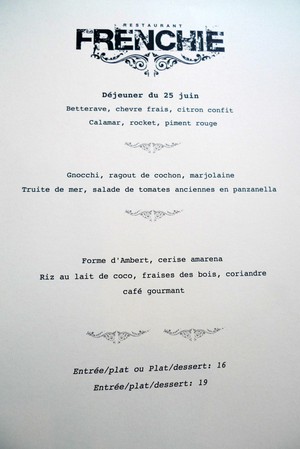 Finally, there’s Frenchie, again a small, unprepossessing place run by two sweet guys where I was used to calling up the morning I wished to go and reserving. “Unh unh, no longer,” I was told by yet another friend, “it’s now impossible to get into.”

Now this prompts several thoughts. First, do we in the blogosphere, especially the Anglo-Saxon part of it, hype places up too much so that they become so popular it’s impossible for us pioneers to get a table? Maybe, but I think the word will eventually get out even if we hold certain places “in pectore” like the Pope.

That may have worked in Craig Claiborne’s day when he was the only show on earth (and he did indeed have some great places he never revealed publicly) but it wouldn’t hold water today with the Internet. We had a lively discussion on eGullet a few years ago about keeping some places, especially their local ones, secret, but people are basically proud of digging up new finds, and it’s a little bit like stealing a Vermeer, you want to show it to your friends, not bury it in a vault.

Finally, the economics of the industry requires that chefs or owners or the bank-loaners move towards higher prices. In the pseudonymous Olivier Morteau’s “Food Business” he says that when he researched the book, now a decade ago, chefs told him it took something like 60 or 70 Euros to put a meal on the table and so anything less than that was a loss. It is no wonder, then, that guys like Thierry Burlot keep bumping their prices up, that when Eric Frechon moved into a Palace hotel from the darkest 19th his prices tripled. Only a few souls like the chefs at Le Clocher Periere try to hold their prices down, despite their success, to hold onto their regular customers.

If I visited Paris once a year or every two years, I would do my research and make my reservations six months ahead of time, too, but for me the fun is calling up in the morning and going that day, even after a dazzling review by someone in the print or cyber business.

So, the places I still would try to get into today:

George and the Dragon Buzz