Home Archives Marriage or PACS? In France Things Are Changing 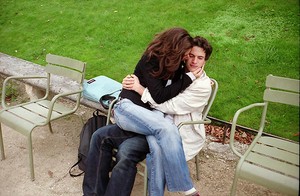 Here’s a tricky question about French etiquette you may need to know if you’re coming to France. How do you address the female member of a couple who are not married in the classical sense but are “pacsé”? That means they officially are living together under what is known in France as the “PACS,” the “Pacte civil de solidarité.” If the woman concerned were traditionally married she would, of course, be addressed as “Madame.” But that’s the point. She’s not married.

You can’t just say “Hi there.” Luckily, French cultural experts who have had to wrestle with the problem generally have agreed that the gentlemanly thing to do is call the pacsé lady “Madame” just like her married counterpart. But this is precisely the kind of response you need to have ready because you risk confronting the problem more and more often in French society where the PACS marks its 10th anniversary this November.

In that 10-year span since it first became law it has become an ever more popular half-way house to a traditional marital union. Already more than a million French citizens have been pacsé, and their numbers have been growing steadily and rapidly. The annual number of PACS contracts registered, for instance soared from 100,999 in 2007 to 144,716 in 2008, a jump of 43 percent in a single year. At its origins in 1999, the PACS was a parliamentary response to growing pressure from France’s vociferous gay community to create some legal underpinning for homosexual unions.

But deliberately, the PACS system was not made the equivalent of a gay marriage. Pacsé couples could be of the same sex but didn’t have to be. They were accorded some but not all of the joint tax and financial privileges of their married counterparts. However, if things didn’t work out, breaking off the relationship was made much simpler than the usually arduous divorce process that would face a classically married couple.

Because it was, after all, the gay community’s pressure that had produced the system, not surprisingly, in its first year of existence some 42 percent of the couples signing a PACS contract were of the same sex. Over time, however, that situation has changed radically for several reasons. The attraction of a male-female union easier to get into and out of than a traditional marriage has been growingly perceived. In addition, parliamentary tinkering over the years has steadily moved the legal advantages of a PACS relationship into ever closer conformity with those accorded classically married couples.

There are various legal sectors where differences still exist. A PACS partner doesn’t yet automatically have the same inheritance rights as a marriage partner, for example. Pacsé couples don’t have a married couple’s adoption rights either. But the trend clearly is to make the regimes ever more similar. That helps to explain why last year, for example, 94 percent of the newly Pacséd couples were of different sexes just as they would be in a classical marriage.

If they want to break up, however, they don’t need expensive lawyers or lengthy divorce proceedings. All they have to do is state their desire to call things off in an official letter to their locally competent legal court. As a noted French sociologist puts it, “The PACS allows a couple to commit without really committing, to unite, individual to individual, without a binding long-term engagement.”

But does that mean being pacsé is taken all that lightly? Not really, according to official PACS statistics. Of some 23,448 PACS unions dissolved in 2008, for example, more than 40 percent of them were not in order to break up but to permit the pacsé partners to move on to an official marriage. Sociologists studying the institution interpret this as a strong sign that, in today’s modern society, a young French couple wants to use the PACS not to avoid a long-term commitment but to give it a trial period to be sure it will last, particularly if the long-term goal is to have children and found a family.

Despite the indisputable growth of the PACS form of union, France still remains a nation with a strong Catholic history and reverence for classical marriages, however. Thus it is worth noting that such traditional marriages run each year to more than double the number of PACS contracts. The way PACS popularity has been growing, however, what that figure might be 10 years from now remains to be seen.

The New Hot Quarters the 9th