Home Uncategorised Swamps to Kettles — How Paris got its Name 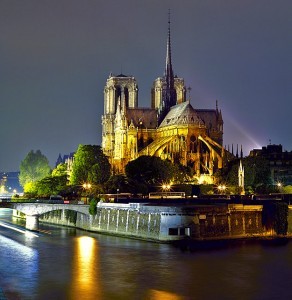 Myth or reality, where was Paris really born?

Maybe the books got it all wrong

Who would deny that Paris stands out today as one of the most historically and culturally attractive cities in the world?   Every street and neighbourhood seems to have its story to tell.  But for all of its monuments and museums, its language and arts, where did it all come from?  What was Paris really like way back “when”…before it came to be known as “the City of Light”?

French school children have always been taught that Ile de la Cité Island, where Notre Dame Cathedral now stands, was the starting point for all of Paris.   The children’s textbooks ask them to picture a colony of hunter-gatherers who settled on one of seven sandbanks in the center of Paris, because of the Seine River’s abundance of fish. These same children also learn that beginning somewhere around 700 BC more people, the Celts, arrived from the east and mingled with these first inhabitants of the island, living in a village of huts connected to the banks of the Seine River by wooden bridges.

All that is fine and good, except times have changed and now we may need to rewrite history all over again.  The oldest artefacts found on the Ile de la Cité until now only date back to Gallo-Roman times and, at the most, to 400 BC.  So, if things didn’t begin on Ile de la Cité, just where then did Paris really begin?

In 1992, upriver from Ile de la Cité, when the Bercy gardens were being renovated, archaeologists unearthed pottery, bows and arrows, wooden and stone tools and three wooden canoes that turned out to be the oldest embarkations ever discovered in Europe.  You can see them on exhibit at the Carnavelet Museum.  All of the objects found at Bercy were carbon-dated back to the Stone Age, 4000 BC. 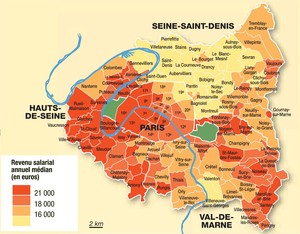 A year later, in 1993, down river in the town of Nanterre, during construction of the A86 freeway, other researchers came across 37 acres of Gaelic ruins including wells, ditches, the foundations of thatched roof adobe houses and those of a building used for public meetings, “rich and abundant” furniture, crockery, and metal broaches all dating back from 500 to 300 BC., the most important pre-roman remnants ever found in the Ile de France region.  The video on this link shows the importance of the site.  The discovery, in 2003, of an ancient necropolis containing the remains of Celtic soldiers dressed in armour with the skeleton of a child at his feet dating back to 400 BC, has once again sparked off the debate.

Impossible to speak about France and the Celts without bringing up the cartoon character Asterix.  Intended to be a parody of modern French culture, the comic strip, first created by René Goscinny and Robert Uderzo in 1959, features the Celts, Astérix, Obélix and their dog Idéfix, at the time of Julius Caesar’s invasion of France in 50 BC.  Because of the play on words and because the stories can be read on more than one level, they quickly became as popular among adults as with children. 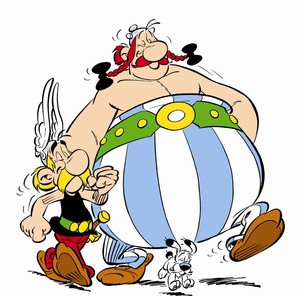 We do know that the Celts were a civilisation that migrated from Asia across all of Europe during the Iron Age, before 700 BC, but because these early clans wrote on wax and wood, unfortunately the only written trace of their Empire has been handed down by the Romans.  In early times, the Romans called Belgium, France, and a part of Germany, Switzerland and northern Italy “Gallis” and the people who lived there the “Gaulois”.  The “Roman” historian “Tite-Levi” and the “Roman” poet Virgil were both from the north of Italy, so they were actually born “Gaulois”!   One of these  Celtic clans originally from Belgium, the Parisii, migrated west and south again around 300 BC, settling in Britain and in the Paris region.  Because iron kettles or “cauldrons” played an important part both in daily life and in myth among the Celts, most archaeologists are now convinced that their name, “Parisii”, meant “people of the cauldron”.

The French Celts originally called their capital Lucotecia, “the place where water shines”.  When he conquered France in 52 BC, Julius Ceasar changed the name to Lutetia (Lutèce in French) from the word lutum meaning “mud” or “swamp”.  Under the Romans, Paris “became the City of Swamps”!  Then, when Roman power waned after the 4th century AD, the name changed once again from Lutetia to Civitas Parisiorum, the city of the Parisii, so to speak “The City of Iron Kettles”.   The nickname “City of Lights” was born in the 19th century when Paris became the first of its kind in Europe to use gas lamps to light its streets.

Back in 1965 the French government decided to build an underground parking lot on the Ile de la Cité Island, in front of Notre Dame Cathedral.  France is very “history conscious” and for the next 5 years archaeologists unearthed what would come to be called the “crypt” of Notre Dame Cathedral.  You will find more about it here in English.  Besides a number of ceramic objects 2400 years old, what they really found were baths like those at the Cluny Museum, foundations dating back to Roman and traces of the rampart built around Ile de la Cité to protect the island after the fall of Rome. 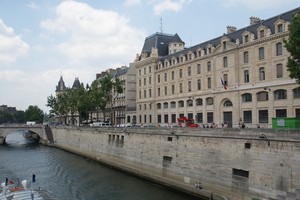 Since April of this year, other archaeologists have been pursuing still more digs on the Ile de la Cité, this time between two buildings that house the nearby Palais de Justice.  They hope to soon reach the “bottom” level and find answers to the questions concerning the Celtic empire that predated Gallo-Roman Paris.  To date, they have found a medieval church and other objects, but still nothing older than 400 BC.  They hope that, once they’ve reached a depth at which the Ile de la Cité Island was actually formed by Fall of 2013, they will finally find answers to some of their many questions.  We too will be eagerly awaiting their conclusions.