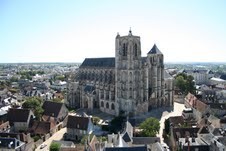 Why a rooster is the symbol of France

A two and a half hour drive south of Paris, the city of Bourges’s narrow streets, majestic 12th century cathedral and over 400 timber framed houses dating back to 1487, remain one of France’s best kept secrets today.  The city’s archaeological digs prove that the region was important as far back as the first Iron Age, but the magnitude of Bourges dates from 700 to 100 BC when some 300 Celtic clans ruled what we call present day France.  The very way in which Europe is broken up into countries and their regions can essentially be traced back to that same Gallic Empire.

Called “La Gaule”, the Empire was so civilized and prosperous that the “Gaulois” were both feared and respected even by Rome.  But then again, from 509 BC to 27 AD the Roman Empire was really little more than a Republic and hardly what we could call an actual Empire.  The north of Italy was a part of La Gaule, so the famous Roman historian Tite-Levi and the Roman poet Virgil were actually both born “Gaulois”!  Unfortunately for the Celts, people like Julius Caesar didn’t receive a salary and the expensive games put on in Rome’s Colosseum came out of their own pockets.  Finding it necessary to repay his debts and polish up his political reputation, Caesar set out in 58 BC to conquer the prosperous Celts. 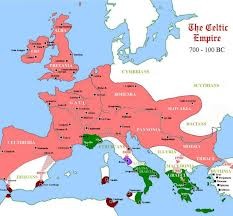 Avaricum (Bourges), capital of the central region of the Celtic Empire

Starting out in Lyon, he worked his way up across the Berry, Burgundy and Champagne regions until he reached what is today Belgium.  The two typically French emblems, “fleur de lys” and the rooster, are both thought to be handed down from Gaelic times. 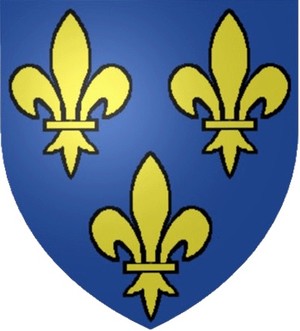 Fleur de Lys coat of arms, emblem used in the past by French nobility

La “fleur de lys”, later to become a symbol of French nobility, was probably the tip of a spear used commonly by the Celts.  As for the French rooster, the word “Gallus” meaning both “Gaelic” and “rooster “, when Caesar arrived, the animal was already a favourite symbol among the Celtic tribes in the north.  It is still a national emblem in both France and Belgium today.

Blame it on Julius Caesar

For many centuries the Roman and Gaelic Empires had lived in peace, but after several years of Roman attacks and hundreds of thousands of casualties, in 52 BC, a wide-ranged uprising among the Celtic people developed.  It was led by a general and rebel called Vercingetorix, a name as famous for French historians as Joan of Arc is to French history.  The La Gaelic Empire included thousands of small farms.  To prevent Caesar from taking advantage of the local harvests, Vercingetorix opted for a “scorched earth” policy and set fire to 20 of La Gaule’s major cities.  Surrounded by swamps and a rampart 25 meters wide and 10 meters deep, the population of Avaricum (Bourges) was convinced that with just 10,000 soldiers they could secure their capital against the Roman legions.  Pleading with their rebel general, they convinced him to spare Bourges.

Thanks to his diaries, we know that when the Roman legions got there, Caesar described Bourges as one of the strongest and the most beautiful cities in the entire Gaelic Empire and the city did, in fact, hold out for over a month against a blockade by some 35,000 Roman soldiers.   It was only when 40,000 of the city’s inhabitants finally perished that it fell to the Romans.  Vercingétorix was taken prisoner soon after, when he lost a final battle at Alésia, and Rome established dominance in La Gaule for the next 500 years. 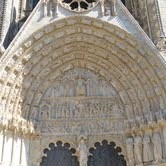 Like all of the cathedrals in France built before the separation of Church and State in 1789, Bourges’s main church, St Etienne (St Stephan’s) cathedral, belongs, not to the Catholic Church, but to the French government.  Figuring on UNESCO’s World Heritage list, it was built in one continuous effort beginning in 1195 and is considered to be one of the most luminous cathedrals in all of France.   Esoteric in many ways, full of mysterious sculpted symbols that leave even researchers and historians perplexed, the cathedral remains virtually unchanged since its conception.  One of five sculpted entrances, “The Last Judgement”, dates back to 1240 and St Stephan’s recently “scrubbed” 12th century stained glass windows are, to say the least, simply remarkable.  The foundations of the cathedral were those of a Christian temple dating back to the 3rd century, but archaeologists agree that the site was probably “sacred” even before Roman times.

Like the Seine River in Paris, flooding from local rivers was common in Bourges during the Middle Ages and the same swamps that protected both cities from invaders also periodically covered much of the land inside the cities’ walls.  Flood water unearthed caskets in the cemetery next to the cathedral, leaving them to float and allowing wandering animals to lay prey to the bodies. In 700 AD, the Carolingian kings became sufficiently fed up with the situation and created an artificial river in Bourges in order to drain the unsanitary parts of the city.  Today flatboats glide silently through the water, offering tours of the 333 acres of former swamp land with their myriad of individual flower and vegetable gardens still cultivated by the local population. 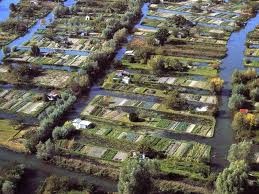 Overall view of the swamps and gardens in central Bourges

When the French speak about living in “province”, they mean they live in “the country” as opposed to “the city”.  But at the time of “l’ancien regime” (former system) a period stretching from the Renaissance until France became “a republic” after the Revolution in 1789, the country was still under rule of a king and France was split up into large territories called “provinces”.   The way a region was governed was rarely the same, but each province had a certain cultural identity that made it different from the others and the Berry was no exception.

The center of Bourges hosts a 16th century château once belonging to a rich Italian merchant, the Hôtel Cujas.  Since 1892, the château has housed the Musée du Berry (the Berry Museum).  Besides its Gallo-roman artefacts and ceramic art pieces from the nearby village of La Borne, the museum’s collections include furniture, tools, clothes, and scenes reflecting the multiple facets of local peasant life in 19th century Berry. 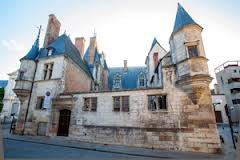 From ceramic art to music in Jacques Coeur Country

Intent of sharing their cultural heritage, locals will rapidly delight in telling you about Jacques Coeur, born in Bourges in 1400 and a prominent figure in the King’s court until his wealth and power became a threat and had him banned into exile.  They will also remind you that for nearly 40 years now Bourges hosts annually an extraordinary music festival, “Le Printemps de Bourges”.  From Hip hop, Rock, or Electro to traditional standards, whatever your age, there is something to fit virtually everyone’s taste during the five day long celebration held each spring.  You can catch a glimpse of last year’s festival by clicking here.  The 2014 edition of the “Printemps” is set for April 22nd to the 27th and proposes some of the best, and often the least known, musical talent in the country. 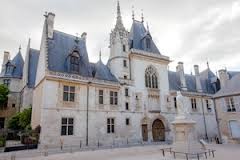 And while you are in the area, we earnestly suggest making the detour to visit La Borne, a unique village located just 32 kms northeast of Bourges, where ceramic clay becomes art in its purest forms.  The oldest recorded oven in the town dates from the 12th century and one French sculptress, I knew of personally, made the trip regularly for many long years all the way from the French Riviera just to buy clay earth found only in the village.  Today La Borne houses an internationally famous group of some 88 artists creating a quantity of the most beautifully inspired pieces of pottery imaginable.  Many are graduates from the Beaux Art School in Bourges holding studio where an abundance of clay and forest marry to furnish wood for the kilns and ideas for the spirit. 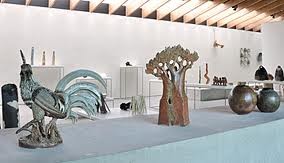 Exhibit hall in the nearby village of La Borne

Lest we forget, there are also numerous châteaux open to visits near Bourges and La Borne including the impressive Noirlac Abbey south of Bourges.  You can click here for a slide show of the Jacques Coeur trail.

Special thanks to the following sources and especially the French tourist office (the Office de Tourisme) in Bourges, for both photos and information:

Photos of Bourges, the swamps and of the timbered houses

Map of the Celtic Empire