Art and Antiques: Holiday Shopping at the Carré Rive Gauche in Paris 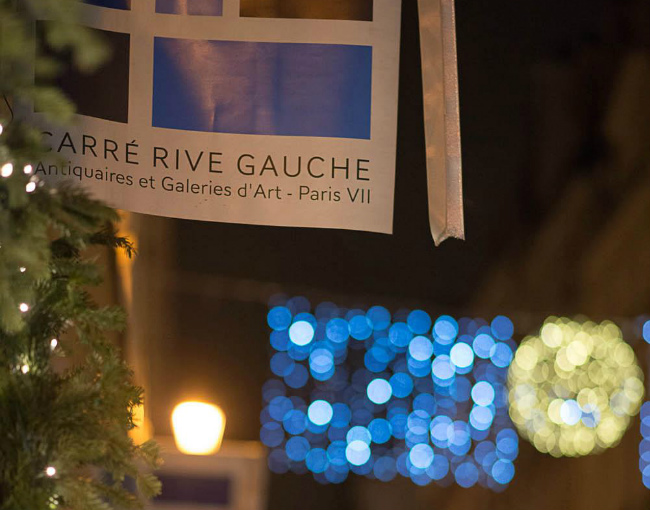 Getting in the holiday spirit/ courtesy of Carré Rive Gauche

The holidays are closer than you think, and if you’re searching for that special gift for that special someone, the Carré Rive Gauche on the Paris Left Bank is overflowing with exceptional choices. Located in the Paris 7th arrondissement just across the Seine from the Louvre and just east of the Musée d’Orsay, the Carré covers roughly rue des Saints-Pères on the east to rue du Bac on the west, and Quai Voltaire on the north to rue de Verneuil on the south. The Carré comprises over a hundred shops that specialize in extremely high-quality antique and contemporary art and objects, and it’s gearing up for the holidays.

The Carré recently previewed a selection of items from member galleries that will be available for holiday gift buying, a period that formally starts on December 3rd and runs until Christmas. The items included antique and contemporary paintings, drawings, sculptures, ceramics, and decorative arts; furniture and objets d’art; textiles; and archeological items. The one caveat for the pieces exhibited: they had to be priced at not more than around 10,000 euros (about $11,400). I did say “special.”

Take, for example, an early 17th century pedestaled basin from the Galerie Alexandre Piatti at 29 rue de Lille. No, your special someone will not be able to wear this bauble on their finger, but if you’re trying to find a gift for that certain someone who longs for that unique decorative piece, this might be it. The piece is carved from a rare marble called lumachelle, so named because it contains petrified shells, which cause the extensive off-white veining. Inspired by the Italian renaissance, it was used as a decorative piece and would work equally well in both modern and traditional settings. Monsieur Piatti’s gallery specializes in Italian art and objects from the Haute Epoque – that is, from the Middle Ages, the Renaissance, and the 17th century – and in objects of curiosity. In addition to owning the gallery, Monsieur Piatti is Chairman of the Carré Rive Gauche. 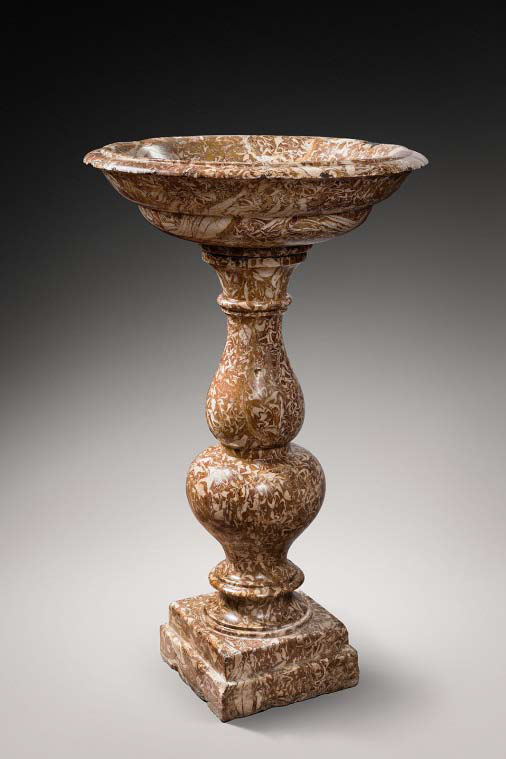 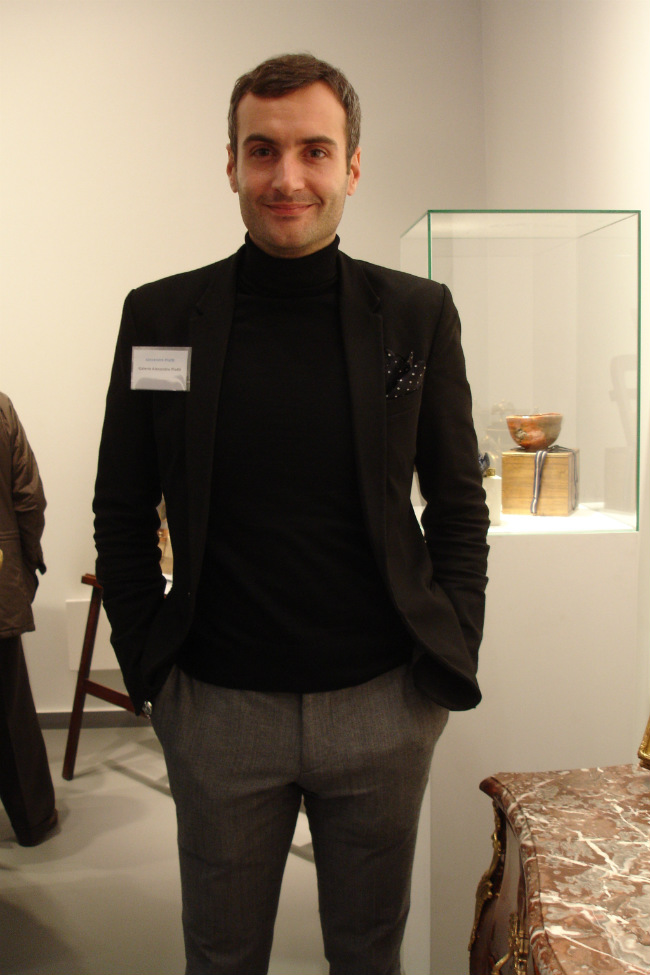 A new kid on the block, the gallery Aujourd’hui, owned by Natalie de Jeu and Paul Poppelaars, will open on December 3rd at 16 rue de Beaune. The gallery will carry contemporary art and African art. Madame de Jeu and Monsieur Poppelaars brought not only a mask titled “Voilette du future” to the Carré exhibition, but also the internationally recognized French artist who created the piece, Josette Rispal. Madame Rispal has long created glass sculpture, and “Voilette du future,” made of glass and iron, dramatically reflects the artist’s interest in the masks we all wear. The piece is among several of Madame Rispal’s works that the gallery will show, along with the works of artist Daisy Bosman. 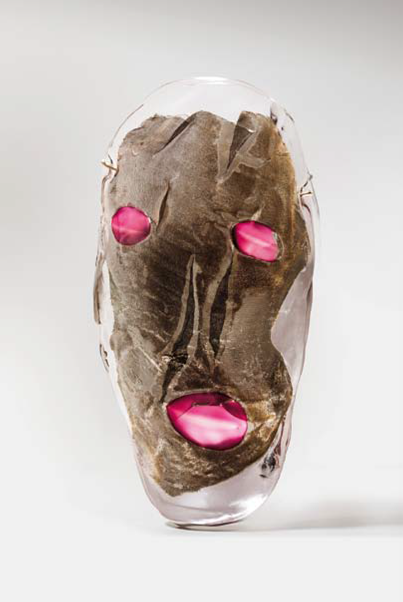 If a traditional painting would be perfect for that special someone, the gouache exhibited by F. Baulme Fine Arts, located at 1, Quai Voltaire, might fit the bill. Monsieur Baulme, who is an art collector turned gallery owner, exhibited a small 18th-century piece by French artist Louis Belanger titled “Paysage avec barque et pêcheurs.” Monsieur Baulme’s gallery specializes in paintings from the 16th through 19th centuries, and among his many fine works is the watercolor “L’Ile de la Cité” by French artist Henri Harpignies. This large painting was exhibited at the 1869 Paris Salon, at which it was awarded a medal. 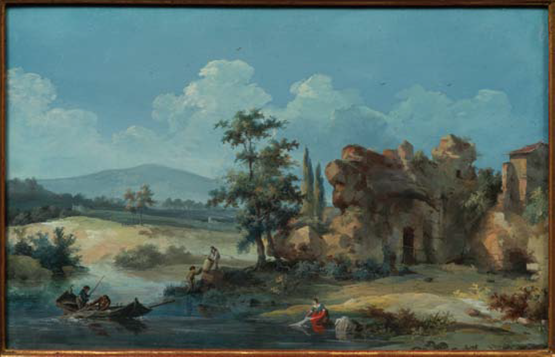 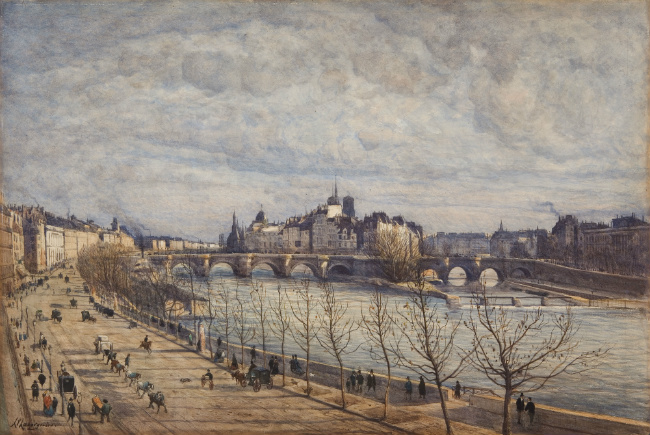 The specialty of Galerie des Modernes, at 2, rue des Saints-Péres, owned by Vincent Amiaux and Philippe Bismuth, is art of the 20th century. They exhibited a small mixed media painting titled “Centaure,” painted around 1987 by the French artist César Baldaccini, who signs his paintings simply “César.” The piece is an homage to his friend Pablo Picasso and is related to a sculpture César created called “Le Centaure,” which is located at the corner of the rue de Sèvres and rue du Cherche-Midi in Saint-Germain des Prés, in the 6th arrondissement. 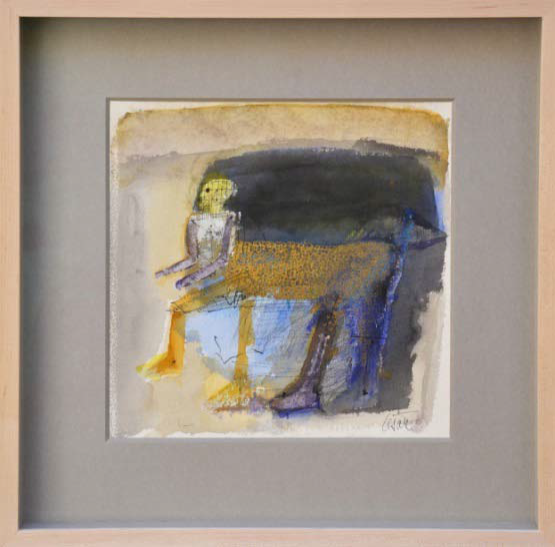 Myrna Myers, at 11 rue de Beaune, specializes in ceramics and Far East Arts. It exhibited a Japanese tea bowl – a chawan – from the Edo period (1603–1867). The owners of the gallery collected Chinese porcelain for many years before opening the gallery in 1976, and their stock includes Chinese and Japanese ceramics, including objects for tea ceremonies; fabrics and costumes, including robes and kimonos; and antique jade and ivory. 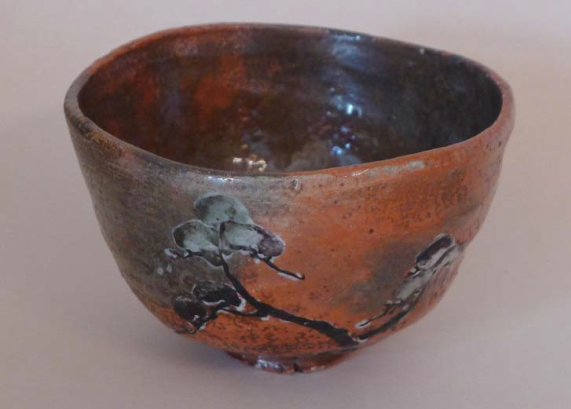 Galerie Altéro, at 21, Quai Voltaire, exhibited a pair of late 17th century agate candlesticks with gilded brass collar and decorations. The candlesticks are part of an eclectic stock that includes 17th and 18th century furniture, mirrors, sterling silver, and objets d’art. But owner Madame Nicole Altéro, whose mother and grandmother were also shop owners, and who was born in a room just above the gallery, has always especially loved items created from glass, and that is what the gallery specializes in. Madame Altéro is one of those beautiful women of a certain age whose face exudes intelligence and strength, and a sense that she’s seen it all and almost nothing would surprise her anymore. She counts among her friends and clients a veritable who’s who of Paris boldface names. But we are too discreet to say who. 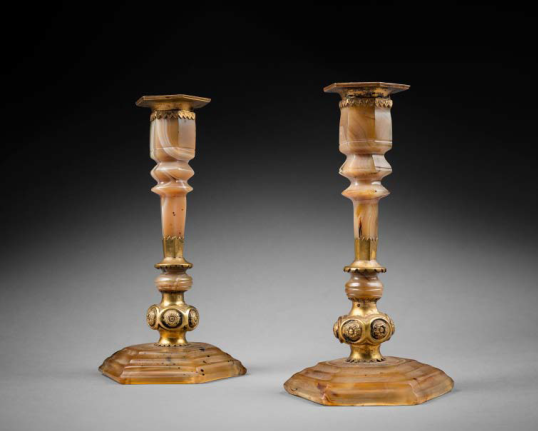 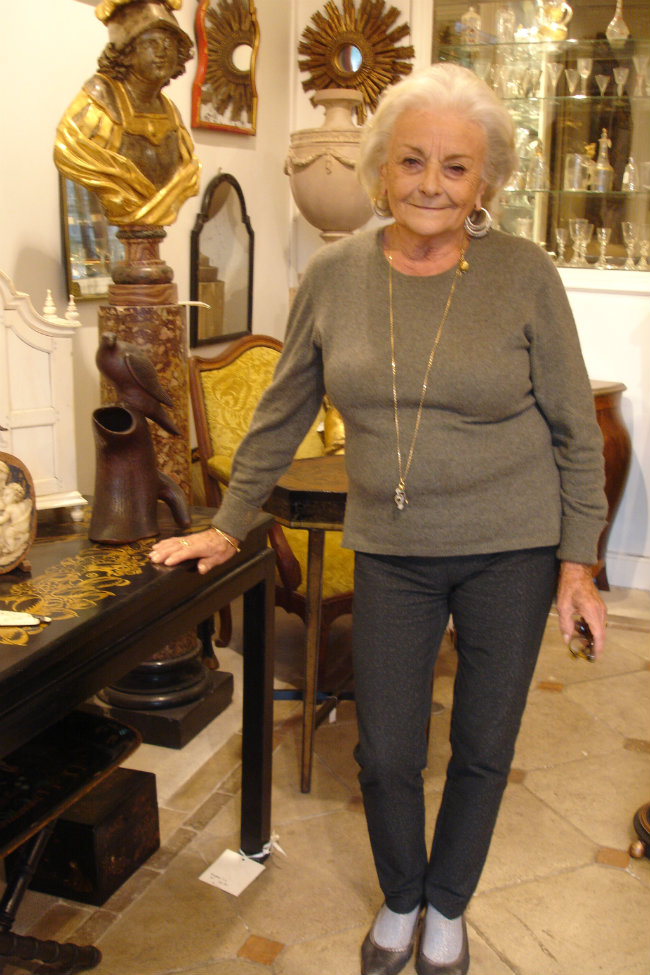 Marie Maxime, at 18, rue des Saints-Pères, exhibited a 19th century gray silk fan hand-painted with seagulls by French artist Adolphe Thomasse for the Parisian company, Duvelleroy. The fan is fitted with a mother-of-pearl handle and guardsticks. Its beauty is a mere hint of the treasures you will find at Marie Maxime, which specializes in objets précieux de vitrine and objets de charme et de vertu; that is, precious objects, and objects of charm and virtue. And they are exquisite. I was drawn to enter the shop because, as I walked by after I left the Carré preview, my eye fell on a sewing box in the shape of a miniature grand piano displayed in the window that stirred some vestigial childhood memory. Perhaps it was a certain detail in just the shade of pink little girls love, or perhaps it was the miniature mother-of-pearl scissors, thimble, and other sewing implements, each in its own custom-made niche. And when I learned that the piece was also a music box, and the song was played just for me, I was delighted beyond measure.

This shop was founded in 1990, and the founder’s niece, Anouch Kasparian, a charming and lovely young woman, who also happens to have a first-rate sense of humor, runs the shop with her aunt. Mademoiselle Kasparian happened to be there the day I visited, and she was generous with her time and knowledge, explaining the purpose and provenance of each item I inquired about. For instance, the fans, which are exquisite, are made even more so once Mademoiselle Kasparian explains what they are made of and you understand the delicacy of the work. One, for example, has a feuille – that is, the actual fan-shaped part – made of openwork catgut decorated with flowers and hummingbirds and two sets of lovers dressed in 18th century costume. Another is made entirely of ivory, each “stick,” or rib, a single piece, carved so finely it has the transparency and delicacy of lace. 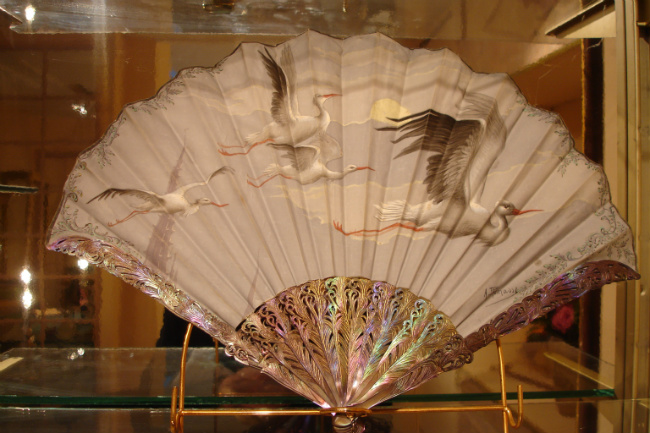 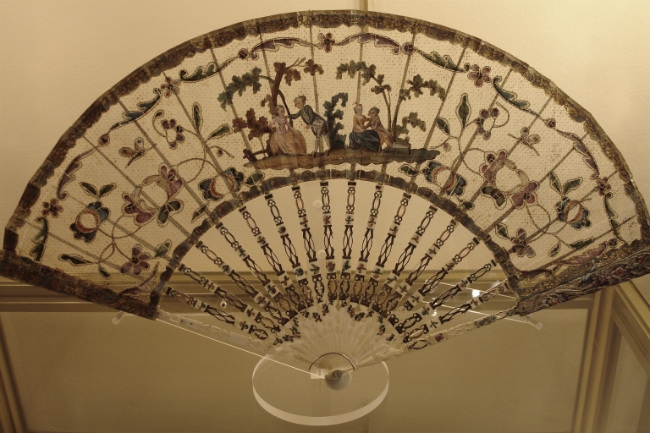 If the language of the court intrigues you, consider the boîte à mouche on display. Today, a boîte à mouche is where fly fishermen keep their flies. But the 18th century boîte à mouche was for fishing of an entirely different kind. Then, a boîte à mouche was a little box that contained round or heart-shaped pieces of black taffeta or velvet, called mouches – that is, flies – that a woman would adhere to her face in different spots, depending on the message she wanted to communicate. For example, a mouche right below her left eye let a potential lover know that she was passionate; a mouche in the middle of her right cheek signaled that the woman was married. A mouche to the right of her lower lip meant she was discreet, and a mouche on the middle of her left cheek signaled she was open to propositions. Mademoiselle Kasparian and I had a good laugh over what would have happened if a woman showed up with mouches in all the possible locations. As if men didn’t already have enough trouble figuring women out…

Marie Maxime is a jewel of a shop and a wonderful place to find that very special gift for that certain someone with highly refined tastes just waiting to be charmed.

This tour de horizon of the Carré Rive Gauche hardly begins to capture the multitude of treasures awaiting you. There is something for every taste, and although the items displayed at the Carré preview may be a bit pricey, the Carré shops offer items for virtually every budget. If you go to http://carrerivegauche.com/ and click on Galleries, you will see a list of all the galleries, their specialties, and their location and contact information.

The Carré Rive Gauche holiday shopping event officially opens on December 3 from 5:00 p.m. to 9:00 p.m. and runs until Christmas. Gallery hours vary, but generally they are open 11:00 a.m. to 7:00 p.m. Some close for lunch from about 1:00 p.m. to 2:30 p.m. You can check the Carré website for your gallery of interest and call them or check their website for hours. Or just wander through the Carré. You can discover the most wonderful things simply by chance.

Lead photo credit : Getting in the holiday spirit/ courtesy of Carré Rive Gauche

Previous Article The Paris Cocktail Craze: Mastering the Art of French Drinking
Next Article Hotel Buzz in Paris: A Floating Hotel on the Seine