The Île Saint-Louis: An Island Gem in the Heart of Paris

You might think the Île Saint-Louis is all about Berthillon ice cream. And you would be partially—and deliciously—right. The famous brand has been one of the island’s claims to fame for more than 65 years.  But . . . there are many other treasures to discover.

The Île Saint-Louis is famous for Berthillon ice cream . . . but also many other treasures. Photo © Meredith Mullins

I’ve been sheltering on my home island since the early days of March confinement. With this compulsory quartier focus, I channeled an explorer/historian/architect soul and discovered much about this tiny gem in the Seine.

A tranquil village in the middle of Paris. Photo © Meredith Mullins

Let’s see how much you already know about the island (sans Google).

You’ll find the answers in this article, so read on (but try the questions first).

While the Île Saint-Louis gets hype as an upscale island, providing a home to millionaires and celebrities seeking privacy, it is really a relatively quiet village with friendly merchants who know your name and cherish your friendship.

The less-than-one-square kilometer area seems to defy Einstein and offer an expanded universe of history and storytelling.

The island was once called Île aux Vaches (Cow Island), because it was an island dedicated to grazing cows for the more inhabited Île de la Cité next door. 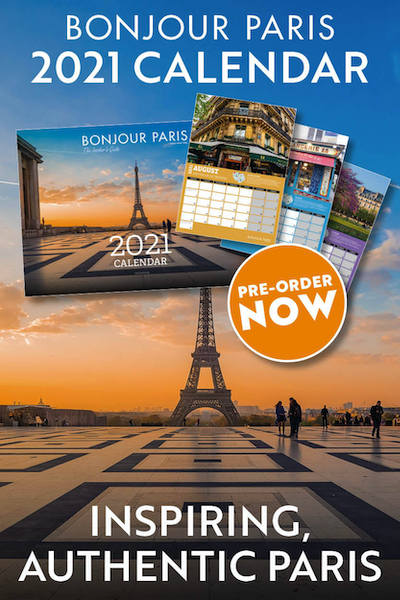 What is less known is that the island was actually two islands, prior to the 17th century— the Île aux Vaches and the Île Notre-Dame (used for court-ordered duels).

In 1614, the canal between the two islands was filled in (now the rue Poulletier) and the island became the Île Saint-Louis (named as a tribute to Louis IX). This merging of islands was part of an urban masterplan—the development of 120 hôtel particuliers (elegant residences) in a unified style of architecture.

The rue Poulletier was once a canal that separated the Ile Saint Louis into two islands. Photo © Meredith Mullins

The team, led by Christophe Marie also included two builders—Le Regrattier and Poulletier— (all of whom, of course, have a bridge or street named after them so we don’t forget who the masterminds were). Monsieur Marie also brought architect Louis Le Vau into the revolutionary project.

The Pont Marie, the oldest bridge of the five island bridges, was completed in 1635. Photo © Meredith Mullins

Several of the main residences from that era remain, as do many of the intricately carved doors, but only a few are close to their original state.

Only the pavillon of the Hôtel Bretonvilliers remains today. Photo © Meredith Mullins

Mansions and Doors and Sculptures, Oh My.

Two of the main island mansions were particular magnets for the famous.

The Hôtel de Lauzun (17 Quai d’Anjou) hosted a famous hashish club, for artists and writers in the mid 19th century—an oasis of creativity protected from everyday reality. Here, Baudelaire was able to live his goal of having no other occupation than to “go on the path towards happiness” and to share that goal with his fellow club members, including Balzac, Gautier, and Delacroix.

This hôtel particulier is definitely worth a visit on the few rare occasions when the city of Paris welcomes the public.

The Hôtel de Lauzun is filled with walls and ceilings of gold and ornate paintings, which must have been particularly mesmerizing for the infamous hashish club. Photo © Meredith Mullins

The Hôtel Lambert (2 rue Saint-Louis en l’ Île) was home to or hosted, among others, Chopin, George Sand, Delacroix, Voltaire, the Rothchilds (and their many party and dinner guests), and, now, the brother of the Emir of Qatar. The mansion has been under renovation since the Sheikh bought it in 2007 (for 80 million euros), including rework after a major fire in 2013, which destroyed several historic ceiling frescoes.

The Hôtel Lambert has hosted many of the rich, creative, and famous over the centuries. Photo © Meredith Mullins

Throughout the island are doors that take us back to the 17th and 18th century. Of course, every door in Paris is an invitation to imagine what lies beyond. And the Île Saint-Louis doors are no exception. They are masterpieces of art and design.

Find the door of the Hôtel Lefebvre de la Malmaison at 22 Quai de Bethune, a typical door of the 17th century. As an added bonus, Baudelaire lived here from 1842 to 1843.

Another ornate door is the door of the Hôtel de Chenizot, once the residence of the archbishop of Paris. The exuberant rococo carvings add a bit of theatre to the rue Saint-Louis en l’Île and belie the quiet courtyard within.

The ornate decoration at 51 rue Saint-Louis en l’Île, the Hôtel de Chenizot, leaves much to the imagination of what went on behind this door. Photo © Meredith Mullins

At #24 Quai de Bethune, the carriage doors, carved by sculptor Etirenne le Hongre, are a link to the past. They have been preserved from the original Hôtel Hesselin designed by Louis Le Vau. This house was also where French President Pompidou lived from 1969 to 1974.

The carriage doors of the Hôtel Hesselin—home for a time for French President Pompidou. Photo © Meredith Mullins

There are also prominent and hidden sculptures on the island. The most prominent is the statue of St Geneviève on the Pont de la Tournelle. She was the patron saint of Paris who purportedly warded off an invasion by Attila and the Huns. Now, she stands tall to protect Paris from any evil coming from the east.

She was sculpted by Paul Landowski, who was also the sculptor of the Rio de Janeiro Christ statue (there are elegant similarities). However, Landowski was disappointed with the statue’s final orientation, because her back is to Notre Dame.

A closer look at St Geneviève as she protects her metaphoric child, the city of Paris. Photo © Meredith Mullins

There are also two sculptures, carved into the high street corners (reminding us how important it is to sometimes look up).

At the corner of rue Le Regrattier and Quai de Bourbon is a mysterious headless sculpture and the remnants of an ancient street sign that named the street the rue de la femme-sans-tête (“woman without a head” street). The story of the headless woman is still a puzzle, although some say it’s actually a beheaded St Nicolas (making the street name the true mystery). BTW, to my eye, the figure is missing more than just a head.

At the corner of rue Budé and Quai d’Orléans is a sculpture honoring the poet Felix Arvers, who was most noted for his heart-wrenching sonnet of unrequited love. Once you know his history, it’s hard to pass that corner without thinking of past loves.

A Who’s Who of Celebrities

The island has a rich history of famous people seeking solace or inspiration here.

From Baudelaire to Madame Curie, from Pont-Aven painter Emile Bernard to composer Frédéric Chopin, from French President Georges Pompidou to contemporary actors and musicians, the island has called to many as a quiet village in the center of a city.

Take a slow walking tour and read the plaques near the doors of the buildings. You’ll find Emile Bernard at 15 Quai de Bourbon, sculptor Camille Claudel at 19 Quai de Bourbon, a tribute to Chopin at the Polish Library at 6 Quai d’Orléans, and assorted other famous figures’ homes scattered throughout the island.

The Île Saint-Louis feels to me like the soul of Paris, merging past, present, and future. I would not want to live anywhere else. Ruby slippers or not, I would find my way home.

The life line of Paris—the Seine River— is ever present. The island’s five bridges are a constant source of inspiration, from an artistic perspective as well as from a standpoint of inviting adventures on the “mainland” in all directions.

You feel you’re in the center of Paris when you can see so many landmarks from the island: Notre Dame, the Pantheon, the Eiffel Tower, the Hôtel de Ville (City Hall), the Tour St Jacques, the Église St Gervais, the Jussieu University tower, the Institute du Monde Arabe, and, with a slight craning of the neck from the Pont Louis Philippe, the Conciergerie. (An added bonus: it’s one of the few places in Paris where you can’t see the hideous Tour Montparnasse.)

A view of the Panthéon from the Île Saint-Louis. Photo © Meredith Mullin

The small pedestrian bridge linking the Île Saint-Louis with the Île de la Cité is always a source of street entertainment, from multi-genre musicians to graceful skaters, from frozen statues to jolly jugglers, and a slightly crazy puppeteer whose puppets are the essence of “found art.”

The Pont Saint-Louis is a never-ending source of entertainment. Photo © Meredith Mullin

Once Mayor Hidalgo banned parking on the main island street, this village became even more tranquil. And, although stores and restaurants change with the same regularity as the rest of Paris, much remains the same.

The Île Saint-Louis is the best of the many layers of Paris. A magical place to be lost in time.

Previous Article Marceline Desbordes-Valmore: Poetry in a Time of Dislocation
Next Article 7 Ways to Celebrate Coco Chanel’s Birthday in Paris