On the left bank of the Seine just down from the Pont Neuf, the notorious restaurant Lapérouse marks the start of the Rue des Grands-Augustins. This short street was named after the convent that once sat here from 1293 until the Revolution when it was destroyed. Back then the street was the Rue de l’Abbé-de-Saint-Denis until it was changed in the 17th century. This is one of the many ancient streets of Paris that guides you deeper into the Saint-Germain-des-Prés district while you take a walk through history.

On May 14, 1610, an eight-year-old Louis XIII was inside the Convent des Grands-Augustins when his father Henri IV was assassinated by François Ravaillac on the Rue de la Ferronnerie as he was returning to Paris following the coronation of his wife Marie de Medicis in Saint Denis. The young Dauphin was quickly found and given the sacrament and would be named King of France an hour after his father was killed. His mother would serve as regent until he was old enough to rule at the age of 13 and would later exile her from Paris. Today the Relais Louis XIII restaurant at No 8 immortalizes the moment on the wall outside. “Ici, le jeune Louis XIII fut intronisé, une heure après la mort de son père Henri IV.”

The most notable resident of Rue des Grands-Augustins lived just across the street from this historical marker. The Hotel de Bretteville at 7 Rue des Grands Augustins
was built in the 17th century but it was the resident that arrived in 1937 that gives it its place in history. However, before we get to that, it was a fictional resident that came first. The great French novelist Honore de Balzac wrote a short story in 1831 called “The Unknown Masterpiece.” It’s the story of three artists that includes a young unknown painter and an old master. In the story Balzac gives the old master a studio where the story opens at the “house on the Rue des Grands Augustins.” Although this story dates to 1831, it was the contemporary artist Cézanne that found an attachment to it and years later a certain Spanish painter named Pablo Picasso. 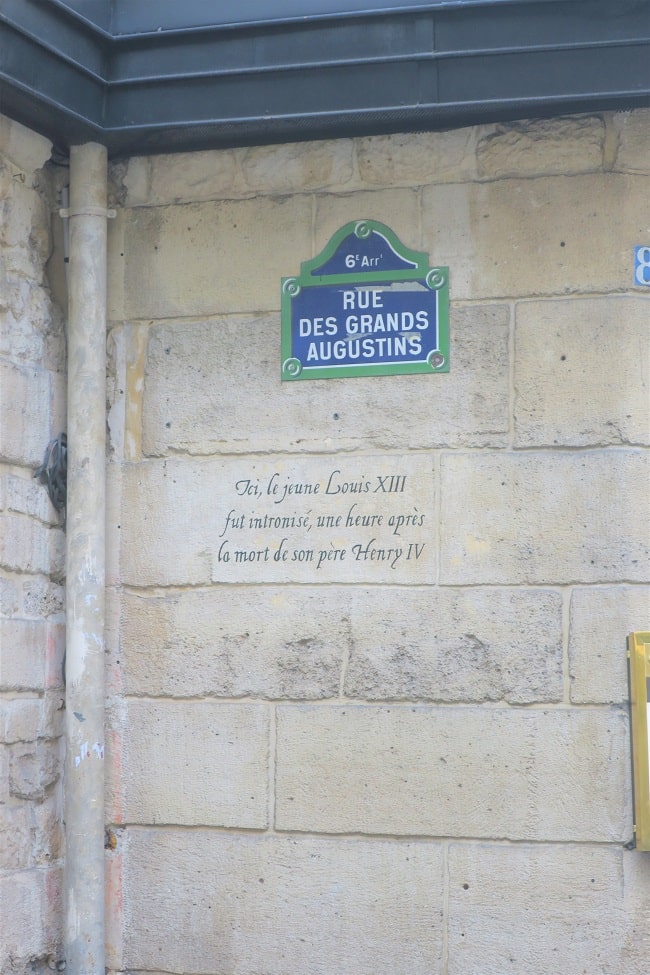 In 1937, Picasso was looking for a new studio, and his mistress at the time Dora Maar discovered the open attic space on the quiet St Germain street. When Picasso found out the address, he had to have it. For he also found a kinship to the old master in the Balzac story. Picasso lived and worked here from 1937 to 1955, spending the Nazi occupation within its walls, being mostly left to himself. In 1937, during the Spanish Civil War, Germans bombed the Basque city of Guernica. With the encouragement of Dora Maar he took on what many would call his greatest masterpiece and most controversial work, the large tableau Guernica. Today this building sits in limbo, overseen by the Picasso Foundation. It was set to open as a museum at some point and recently rumors are flying it may finally happen. I love to stand in front of the gate and imagine Picasso walking in that door and up to his studio each day to paint one masterpiece after another.

Picasso wasn’t the only artist that called the street home. In 1912 Robert Delaunay moved into no 3 with his wife and fellow artist Sonia. Inspired by Cubism he would be at the forefront of creating the Movement Orphiste branch of Cubism named by Guillaume Apollinaire. Staying with his friends for a few months in 1912 he would watch him paint, breaking down objects, including the Eiffel Tower and filling the pieces with light. Exhibited at the 1913 Salon des Indépendants, Apollinaire would name it Orpheus based on his poem. “Orpheus, Admire his inborn might, His form of noble grandeur! Here is the voice heard at the birth of light”. You can find many of his paintings in the Musée d’Art Moderne de la Ville de Paris including his lovely paintings of the Eiffel Tower. 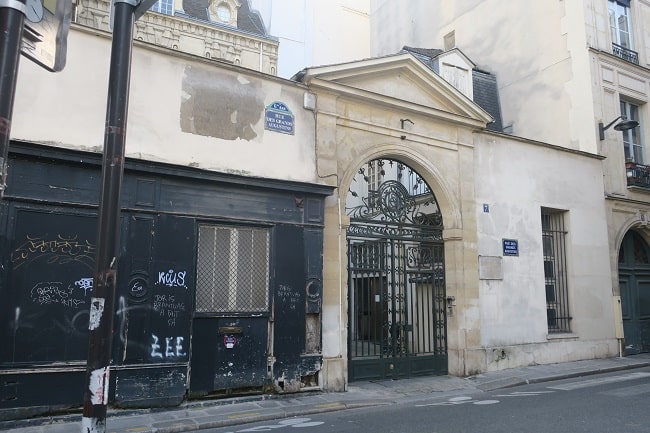 At No 8 and 10 the ancient exposed chestnut beams of the former Hotel de Bussy dating back to the 17th century are marked on the upper balconies with the initials of the original owners EB. The address was used by Alexandre Dumas in his book The Dame de Monsoreau, telling the story of the loves of Diane de Méridor, wife of Count of Monsoreau and Bussy d’Ambroise. However, look to the left of the door at two historical treasures. Below is a cast iron plaque with the seal of Paris, the ship. The rectangular repères console markers are the oldest of their kind in Paris. Dating back to the 19th century they were put in place to record three different measures that would aid in water flow, moving through the city by gravity. Measuring the levels from the Pont de la Tournelle used for the flow of the sewers, the second number from La Villette for drinking water and the third for the distance from sea level. The one that can be found on the Rue des Grands Augustins is the finest example left in Paris. Many have been painted over and worn away over time. One of the many reasons Paris is such a fascinating and beautiful place are these tiny touches. It is just a marker but it is designed with the flourishing touches that makes the most basic thing beautiful. 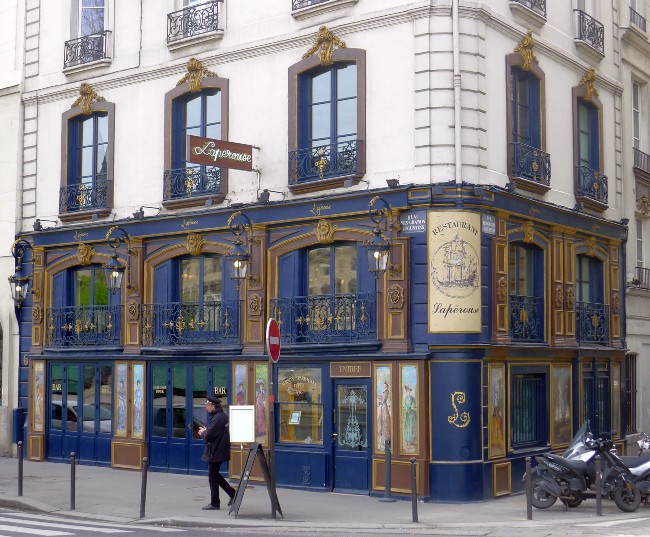 Just above the marker is an indention within the stone. These niches were used to house oil lamps used to light the streets in the 18th century. The niche and groove was covered with a cast iron cage that each day lamplighters would make their rounds maintaining and filling the oil and light them as the sun set. Unlocking the cage they would lower the lamp, complete their task and move onto the next lamp a few meters down. Only two of these remain in Paris, but this is the only one in perfect condition.

Towards the end of the street at no 28 is the restaurant Roger La Grenouille. Opened in 1930, this classic French bistro has seen everyone from Picasso to Saint-Exupéry; even Pope John XXIII has walked through its doors. The menu has been updated over time and includes all of those classic French dishes you crave and, of course, frog legs. Maybe Picasso strolled down the street for some frog legs while he was working on Guernica?

Before you sit down to a lovely meal, walk into the courtyard door just before the bistro and keep walking. Inside you will discover a wonderland of corridors one after another filled with plants and a few frog statues. It’s these small little secret passages that fill almost every building in Paris, one never knows what you might come across, so when you see an open door, venture in and discover hidden gems.

For more articles in our “Streets and Stories” series, click here. 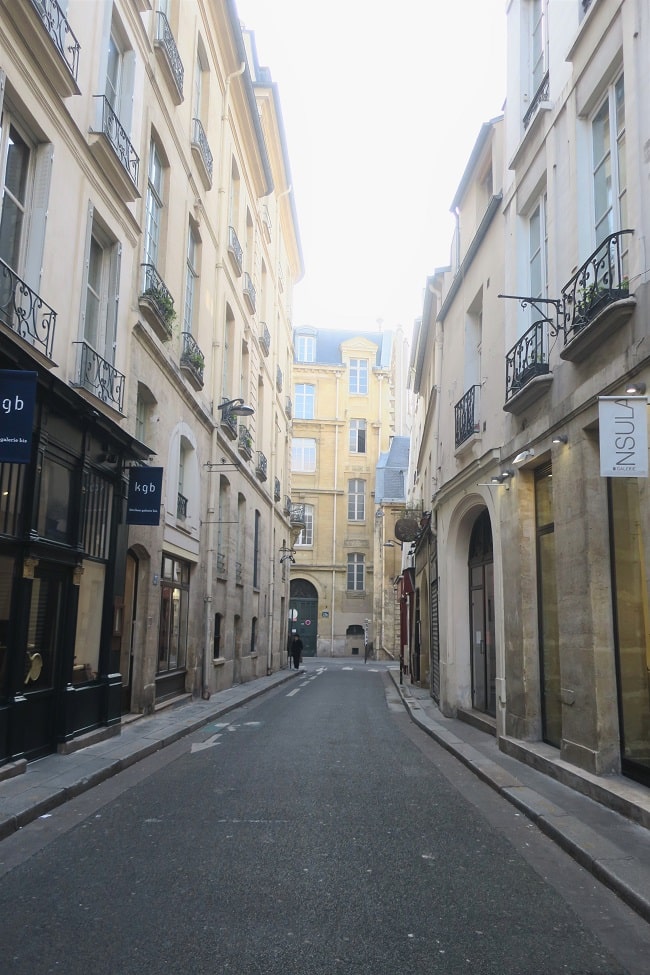