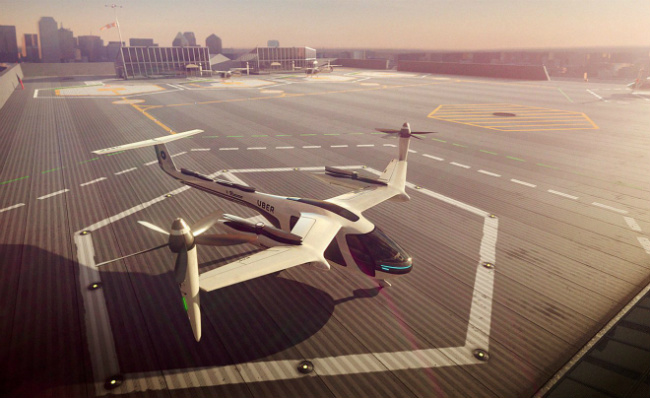 “Great Scott!” – as Dr. Brown exclaims in Back to the Future, the famed fantasy film about a flying, time-traveling car.

In a plot that feels pulled right from a fantasy film, flying taxis are coming to Paris. Well, the development of them is coming to Paris, at least. As reported last week by The Verge, Uber will open “Advanced Technologies Center in Paris focused on flying taxis.”

And what in the world is a flying taxi? The electric-powered, futuristic vehicles are being developed by ride-sharing company Uber, in hopes of ushering in a new age of transport. Specifically, air transport. The flying taxis would travel primarily vertically, and, like helicopters, they would land atop buildings (which I already foresee problems with, given the layout of Paris, its buildings, and, well, Parisians – and I say that with love.)

Paris plays an interesting role in the origin story of Uber, as The Guardian reports. The idea for the app was “born out of a need to get a ride on a cold night in Paris,” as per Uber’s head of aviation, Eric Allison.

And so, they’re going back to the place where it all began. Uber is building a lab (officially called an “Advanced Technologies Center”) in Paris. The lab will develop and explore the technology and infrastructure needed for these devices and a system for their operating properly. The flying taxis are being developed under the moniker of “Uber Elevate,” and the planned budget is $23.4 million over the course of five years. This is good news for the economy of Paris and the production of new jobs, but it could spell disastrous news for Parisians in the testing of – and execution of, if that comes to be – the taxis.

Dara Khosrowshai, CEO of Uber, does not share my reservations, saying: “France is the perfect place to advance our Uber Elevate program.”

Of note, France, along with England, has had a contentious relationship with the ride-sharing app. In efforts to protect the jobs of taxi drivers, both countries have seen protests by taxi drivers, and limitations enforced on Uber’s presence in the metropolises of Paris and London.

“…machine learning-based transport demand modeling, high-density low-altitude air traffic management simulations, integration of innovative airspace transport solutions with European aviation regulators such as EASA and the development of smart grids to support future fleets of electric on the ground and in the air transport.”

Innovation is often a good thing, as is a stimulation of the French economy and its visibility on a global scale, but it remains to be seen what will come of this ambitious, futuristic endeavor, especially in a city which – by and large – prides itself on its rich history and time-honored traditions.