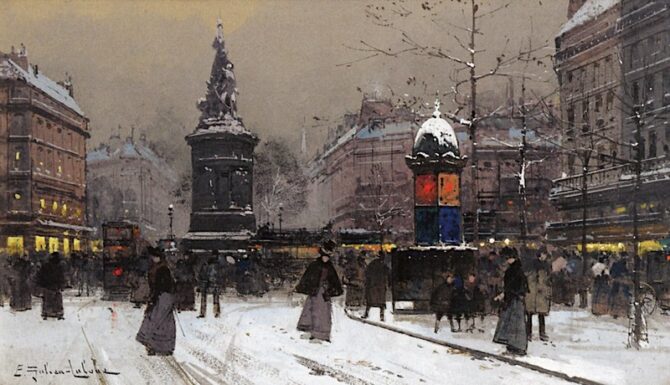 Let it snow! It was a world of wintry white on Saturday, as a rare snowstorm blanketed Paris. In the midst of a cold and dark winter season, the snowflakes brought on the thrills for Parisians of all ages as they hit the streets and parks to watch the flurries — and some even set up ski slopes on the hills and in the parks. There were snowball fights, improvised sleds in Parc Montsouris, and carrot-nosed snowmen galore. Check out this video, shown on BFMTV, of a skier jumping beneath Sacré-Cœur in Montmartre.

In other fun news, it’s awards season. No, we’re not talking Michelin stars, though we’ve got the big scoop on that (check out our recent article here) and as France 24 reports, there’s been lots of criticism over the Michelin Guide’s decision “to hold the awards while establishments remain closed in the COVID-19 pandemic.” But that’s not what’s in our radar right now. We’re talking the best galette des rois, because in France, there are awards for all the wonderful boulangerie products baked by our proud bakers. As recently reported by ActuParis, it was a Parisian boulanger who recently scored the prize for the best galette aux amandes in the Île-de-France region. The honors went to Lionel Bonnamy of the Fabrique aux gourmandises in the 14th arrondissement.

Not all the news is rosy, of course. The French COVID-19 vaccination program continues to face criticism because of its slow roll-out, and the appointments (for those aged 75+) at Parisian vaccination centers are all full for the moment. To stem the spread of new coronavirus variants, the French authorities have issued a countrywide curfew of 6 pm which sees Parisians struggling to make their grocery purchases after their work day and before the shops close… Schools remain open for the time being, though indoor sports and other activities are no longer permitted.

Let’s leave this week’s news digest on a positive note, with a beautiful video from the Élysée Palace. A reportage by France24 goes behind the scenes of a magnificent restoration of the salle des fêtes— the room where the French President is sworn in. It’s filled with Baccarat crystal chandeliers, historic tapestries, ceiling frescoes. For the makeover, 150 different craftsmen were recruited to work on the project— from the curtain makers who design yards of silk and satin to the the gilders who cut gold leaf in the same way its been done for centuries. The video gives insights into the remarkable care with which France preserves its cultural heritage. A splendid showcase of French savoir-faire.

More in letter from paris, neige, snow in paris