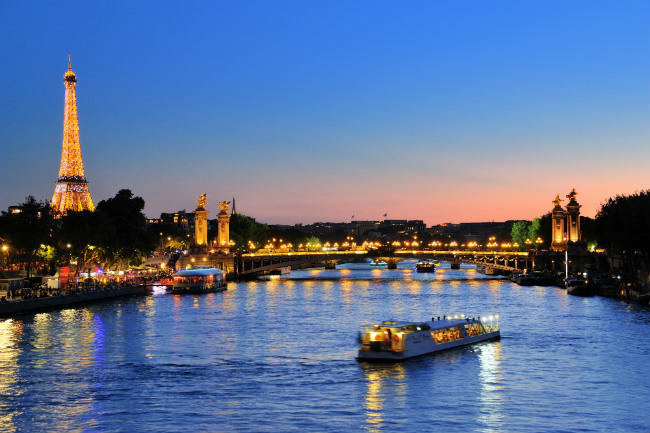 Mid January, and it’s not too late to wish your friends and family a happy new year, per French custom. Here’s the official video message from the Paris Office of Tourism. The theme? Jump for Paris!

The Paris metro keeps expanding! After six years of construction work, the line 4 has been extended to the south with two new stations: Barbara (named for the singer) and Bagneux-Lucie Aubrac (named for the history teacher who was a member of the French Resistance during World War II). Stretching from Porte de Clignancourt in the north, the 4 is the second busiest metro line after the line 1. The previous end of the line was Mairie de Montrouge in the south. This highly anticipated inauguration is part of the Greater Paris project, which aims to create better links between central Paris and the surrounding suburbs. An additional 37,000 passengers are expected each day on the line 4. On the occasion, the dedicated Twitter account for the line 4 showed off some archival images of the line. Check it out here:

Meanwhile environmentalists are up in arms about the planned extension of the line 1 into the Bois de Vincennes. As reported by France 24, “the collective Touche pas à mon Bois de Vincennes (‘Don’t touch the Vincennes Forest’) says the project to extend Paris’s Line 1 Metro would result in a “massacre” and an “irreparable” mutilation of the wooded public park on the eastern edge of Paris.” Thousands of trees would have to be cut down, and this deforestation would also impact the biodiversity. The project would add three new stops to the eastern end of the line in two Paris suburbs (Montreuil and Fontenay-sous-Bois), thereby alleviating the congestion on the RER A, the commuter rail line that’s the busiest in Europe.

We’re in the midst of the fifth Covid wave, as daily new cases regularly reach 300,000 in France. A new vaccination center has been opened in front of the Hotel de Ville in Paris and French parliament has approved the vaccine pass law in an effort to fight the pandemic. The vote on Sunday was 215 in favor to 58 against. As reported by the Guardian, “The new law, which had a rough ride through parliament, with opposition parties finding some of its provisions too tough, will require people to have a certificate of vaccination to enter public places such as restaurants, cafes, cinemas and long-distance trains. Currently, unvaccinated people can enter such places with the results of a recent negative Covid-19 test. Nearly 78% of the population is fully vaccinated.” There were some anti-vaccine protests in Paris and other French cities on Saturday, but the numbers were much less than previous protests. A larger protest took place last Thursday as schoolteachers went on strike. Teachers are frustrated by changes to the testing protocols for schools.

In travel news, France has reopened the border and relaxed rules for vaccinated British travelers, essentially saving the winter ski season in the Alps. Vaccinated Brits will no longer need a compelling reason to travel, nor self-isolate when they arrive. They must present a negative Covid-19 test taken 24 hours before leaving the UK. As a result, bookings by UK holidaymakers are surging.

And for our American readers, there are some flight deals to be had right now. As reported by The Points Guy, “American Airlines, Delta Air Lines, United Airlines and partner airlines are offering flights starting below $500 round-trip to Paris from major U.S. cities.” Read the full article here.

Fashion Week is going ahead as planned, despited the Omicron surge. As reported by Agence France-Presse, “the industry is determined to get back on the catwalks after nearly two years during which most brands were forced to retreat online.” The menswear week launched on Tuesday, with fashion houses (including Dior, Hermes and Rick Owens) investing in live shows. Perhaps most talked-about: Louis Vuitton will be presenting the final collection from American designer Virgil Abloh, who passed away in November after a battle with cancer. To quote the AFP: “Such is the interest around Abloh, a close partner of Kanye West who helped break through glass ceilings for black designers, that Louis Vuitton is presenting the show twice on Thursday. Many are also excited to see what streetwear veteran Nigo does as the new artistic director of Kenzo.”