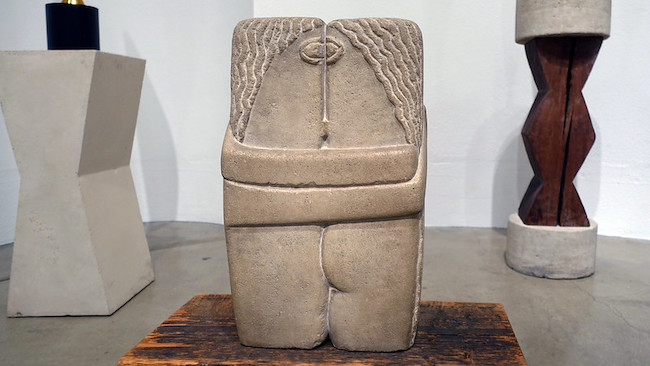 First on the agenda today, a story of romance and intrigue (and legal woes). In Montparnasse Cemetery, there’s a famous sculpture by Constantin Brancusi that’s long been a site of pilgrimage. Titled “The Kiss,” the marble sculpture sits atop the tomb of Tatiana Rachevskaïa, a Russian student who committed suicide in 1910. As explained by ArtNews, “her lover, a Romanian doctor named Solomon Marbais, purchased the work from Brancusi and had it put on her grave sometime around 1910 or 1911.” But there’s been “a legal fracas” for years, as Rachevskaïa’s heirs wish to remove the artwork. (Surely, the exponentially increasing demand for Brancusi’s work— auctioned for millions— has nothing to do with it?) Recently, a French court sided with the heirs, saying the family could reclaim the sculpture. Not so fast, says the City of Paris, claiming it’s a cultural monument that can’t be moved. And so the saga continues…

The reconstruction of Notre-Dame cathedral, devastated by fire in 2019, is well underway, with construction crews hard at work on the beloved monument. Most recently, the search is on to find the wood needed to rebuild matching the cathedral’s classic design. As reported by Forbes, French forestry teams are scouring forests in the Eure region for 1000 oaks needed for the new Notre-Dame spire. As explained by Forbes, “time is running short. President Emmanuel Macron had set a goal of rebuilding the spire by 2024. But the trees would first need to dry after being cut for between 12 to 18 months. That means any trees chosen for the project must be chopped down by the end of March before the sap begins to rise in the Spring.”

Meanwhile Nice is warning visitors to stay away because of high COVID-19 numbers, reports Deutsche Welle. With among the highest infection rates in the country, the French Riviera will now be going under lockdown for the next two weekends. And in other pandemic news, France is considering only one vaccine dose for people who’ve already been infected with COVID-19, instead of two. France’s health advisory board has made the recommendation that one shot provides sufficient protection, says The Washington Post, explaining that if that practice were enacted (and followed by other countries), it “could free up tens of millions of doses.”

In a sign that it’s not just you and me suffering pandemic fatigue, France is already looking ahead to the summer, anticipating that its famous festival season will be able to go ahead despite the ongoing COVID-19 crisis. As reported by France 24, the French culture ministry recently announced that summer festivals can take place if attendance is capped at 5,000 people and the public must be seated at the concerts. Not everyone is happy about this news… (Attendees of the We Love Green festival in Paris, for example, can’t imagine being seated. And the Eurockéennes festival drew 128,000 people in 2019 to hear a lineup of top musicians.)

A post shared by Parisiens in Paris 🇫🇷 (@parisiensinparis)

Love Paris street style? French Vogue has just the thing for you. To quote: “Far from clichés, the Instagram account Parisiens in Paris captures the true style of Parisians every day on the streets of the French capital. The result? truly inspiring fashion inspiration.”

We’ll leave you today with a wonderful reportage showing what’s going on behind the closed doors of the world’s most famous museum. “Meet those who have Paris’ Louvre all to themselves.”

Meet the people who have the #Louvre all to themselves. pic.twitter.com/KSMeMwOvnb

Previous Article Versailles Nuit by Patrick Hourcade: The Nighttime Poetry of the Palace
Next Article Daft Punk Calls it Quits