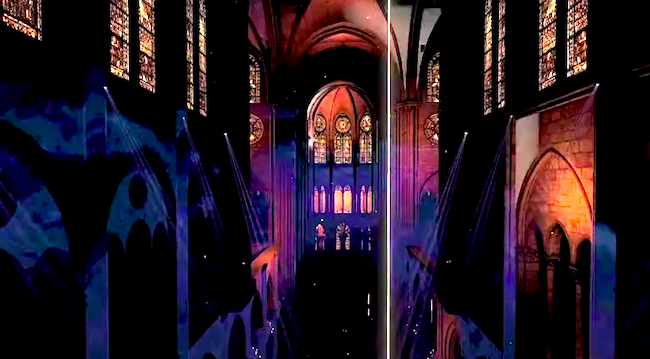 It’s official. We no longer need to carry the attestation de déplacement, the signed and dated permission form, in order to leave our homes during the pandemic. And we are free to roam beyond our cities, departments, regions… But even if the lockdown has eased, the curfew is back. We must stay inside from 8 pm to 6 am every day, except for Christmas Eve. Since we’ll be stuck at home for New Year’s Eve… all the more reason to tune into this live concert by Jean-Michel Jarre which will take you on a funky virtual tour of Notre-Dame de Paris, the beloved landmark. The project is a partnership between the city of Paris, UNESCO, and French VR start-up VRrOOm. Join the party on December 31st at 23:25 (CET).

WARNING: The video below may potentially trigger seizures for people with photosensitive epilepsy. Viewer discretion is advised.

Looking for some more entertainment to get you through until 2021? Charlie et Styl’O, a French duo who create parody versions of songs, released a remarkable spin of Michael Jackson’s Billie Jean that will delight food lovers. Entirely a cappella, the song incorporates French food words like “pain,” “tarte”… You’ll just have to see it to believe it.

Meanwhile the city isn’t just showing off beautiful Christmas decorations this year. (Pssst. If you haven’t had a chance to see the illuminations, check out Meredith Mullins’ article here.) Paris has also unveiled a new look to the Place de la Bastille, which has been undergoing a transformation project to make it more pedestrian friendly. Now you can descend a set of stairs to reach the Canal Saint-Martin and to soak up the surroundings of the port of the Arsenal.

Last but not least: the Métro line 14 has just inaugurated three new stations, expanding the line to Post Cardinet, Saint-Ouen, and Mairie de Saint-Ouen to the north of Paris. Since the line was first opened in 1998, it was wheelchair accessible and completely automated — often hailed as a showcase of RATP expertise. By 2024, the line will be extended all the way to Orly airport and Saint-Denis Pleyel. Here’s a video showing the moment when the first passengers were allowed into the new station, rushing to scan their Navigo passes.

Lead photo credit : A youtube screenshot from, 'Welcome to the other side trailer'. Photo credit © jeanmicheljarre, Youtube