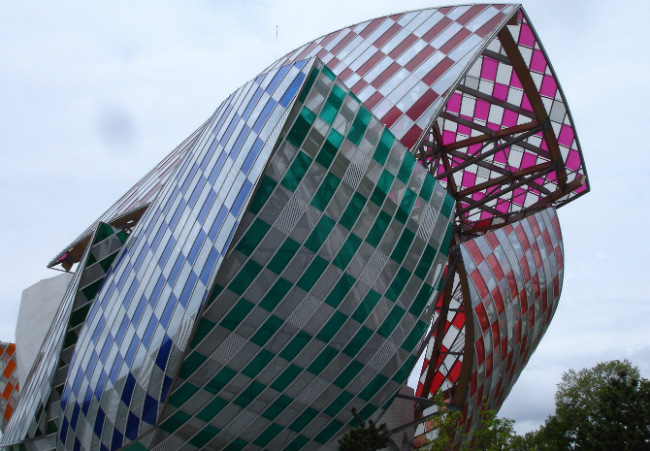 Seventy-eight-year-old French artist Daniel Buren must be harboring a little boy in his heart whom he lets out every once in a while to create one of his ebullient installations that plays with color, light, and shadow. The list of his installations is too long to enumerate here, except to say some readers might have seen his Monumenta installation at the Grand Palais in 2012. Buren refers to his installations – or “interventions,” as he calls them – as in situ – that is, the design is specific to and derived from the site. His latest such installation, L’Observatore de la lumière (The Observatory of Light) recently opened at the Fondation Louis Vuitton, and if you haven’t visited the Fondation yet, this installation is a great reason to get on over.

The Fondation commissioned acclaimed architect Frank Gehry to create its new home, and Gehry’s building was greeted with much acclaim when it opened in October 2014. The roof is composed of twelve sails formed of 3,528 panes of translucent glass. The building is a billowing beauty. 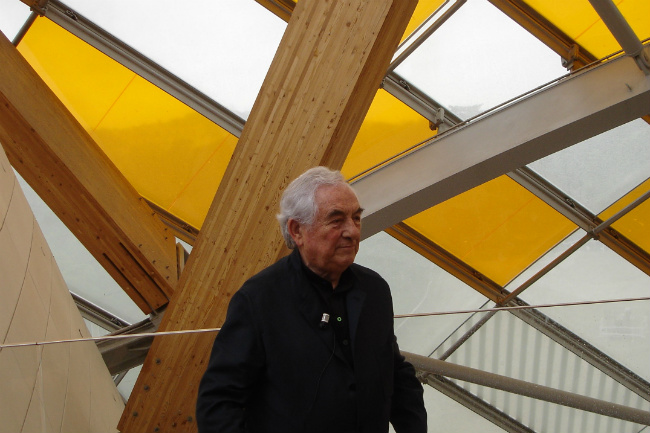 Daniel Buren at the opening of his installation, L’Observatore de la lumière / by Diane Stamm

There’s a whole psychology to color, but suffice it to say that the overall effect here transforms and defines the building in such a way that its structure becomes much clearer than it is with Gehry’s translucent glass. (From the east, the building looks like an overblown, slightly tipsy galleon.) The installation also lifts the heart. Do not underestimate the value of the latter in an art installation. Buren’s work can be appreciated on several levels. In addition, on a sunny day, the colored light reflects delicately on the plein air plazas and walls under the roof, giving them a certain magical quality. So try to go on a sunny day. 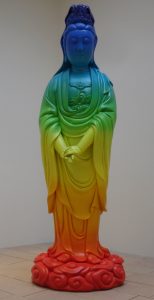 Included are works by famed Chinese artist Ai Weiwei; and video installations by Cao Fei, Yang Fudong, and Zhou Tao, which explore various themes in Chinese society and share a sometimes dreamy, surrealistic quality. Xu Zhen presents a new take on the Chinese Buddhist goddess, Guan Yin, in his giant, computer-generated polychrome sculpture, New (2014); and Zhang Xiaogang explores social class and family ties in his work Bloodline—A Big Family, My Ideal (2008). But perhaps the most fascinating pieces are those exhibited in Gallery 9, for in that gallery are displayed the works of Yan Pei-Ming and Zhang Huan. 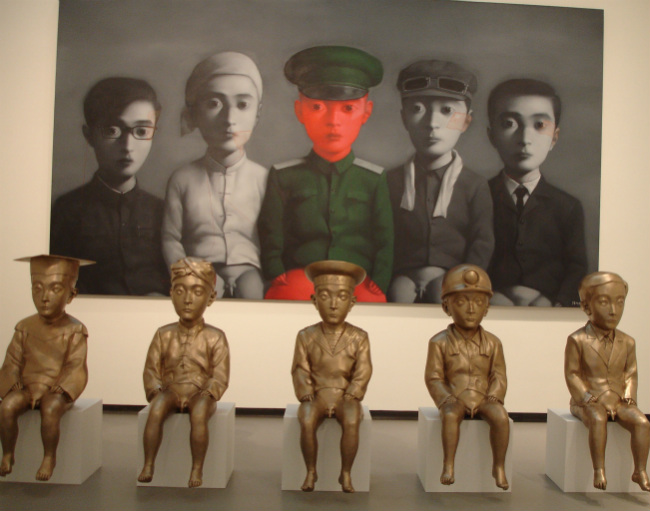 Yan Pei-Ming was born in Shanghai in 1960 and lives and works in France. Since the mid-1990s he has been portraying current events and scenes that illustrate “humanity’s tragic destiny.” His work has been compared to that of Goya, Delacroix, and Géricault. Since 1996 he has been painting massive works, such as the diptych on display entitled Les Temps Modernes, painted in 2015, which is more than nine feet high and 13 feet wide.

Painted in midnight blue, you can see the artist’s energy as he swept his oversize paintbrush across the canvas in strong, wide strokes. The sweeping blue-black brushwork depicts a turbulent sky, but it is also reminiscent of a roiling ocean in the dark of deepest night. Moonlight penetrates the dark and reveals a line of people who, huddled, snake into the distance. Dark and mysterious, intriguing and alluring, the painting is a statement on the masses of humanity that today are searching for someplace to find hope, peace, and some modicum of security. Yet the painting provides no assurance of finding those things so fundamental to the human soul. 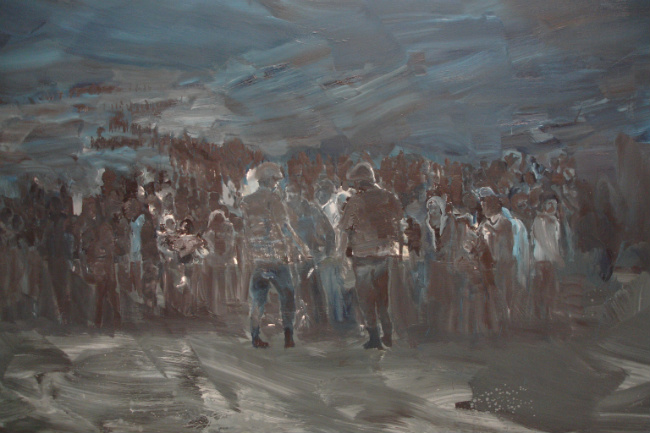 This diptych alone is worth a visit to the Fondation. But so are the two enormous triptychs in the same gallery created by Zhang Huan, who was born in 1965 and lives and works in Shanghai. Both works, which are more than nine feet high and 35 feet wide, were created from the ash the artist’s assistants collected from Buddhist temples. Zhang is a convert to Buddhism.

One triptych, The Great Leap Forward, created in 2007, depicts laborers constructing the Grand Canal. It alludes to the agrarian and industrial reforms initiated by Mao between 1958 and 1960 that led to one of the most severe famines of the 20th century. The other triptych, National Day, created in 2009, depicts Tiananmen Square during the 10-year anniversary of Mao Zedong’s declaration of the founding of the People’s Republic of China. The works are exquisitely detailed and share an atmospheric quality – the ash is a kind of murky grey – giving the impression that you might be viewing a grainy or impressionist monochromatic photograph. Incessant beeps sounded as people breached the security perimeter around the paintings as they tried to get as close as possible to the works to inspect the minute detail. Clearly, people were intrigued. 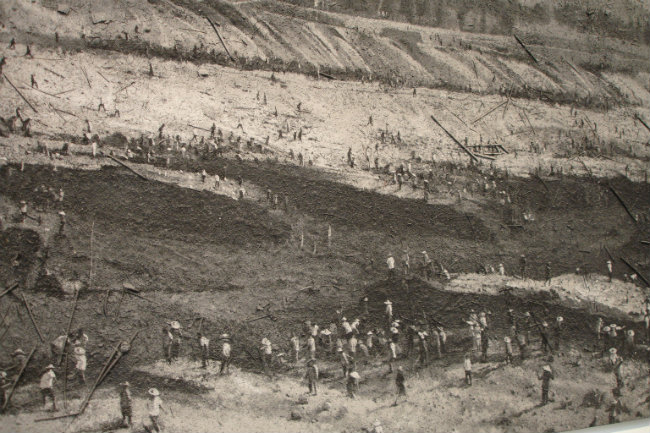 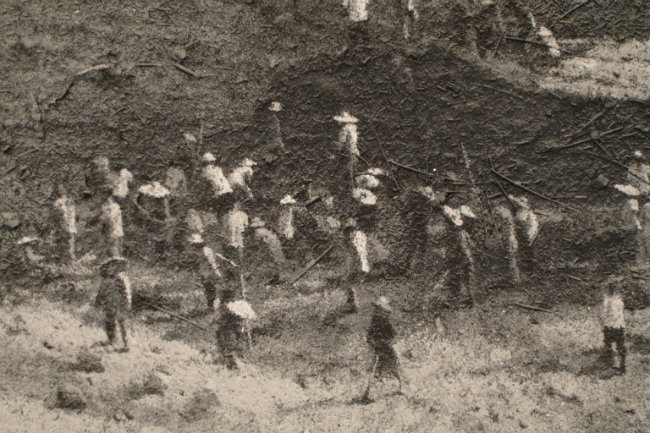 The external design of Frank Gehry’s building deserves the acclaim it has received. Inside, however, the placement of the galleries is a bit confusing; it is difficult to follow the logic – if there was meant to be logic – of their placement, and thus it is easy to miss some of the art on display. This appears to be a victory of an architectural idea over ease of public use. It’s probably a tradeoff worth making, but it does make you sometimes feel you’re on a bit of a hunt for the next gallery. None of that, however, detracts from the art or the building, and if you haven’t yet visited the Fondation Louis Vuitton, now would be a great time to do so. 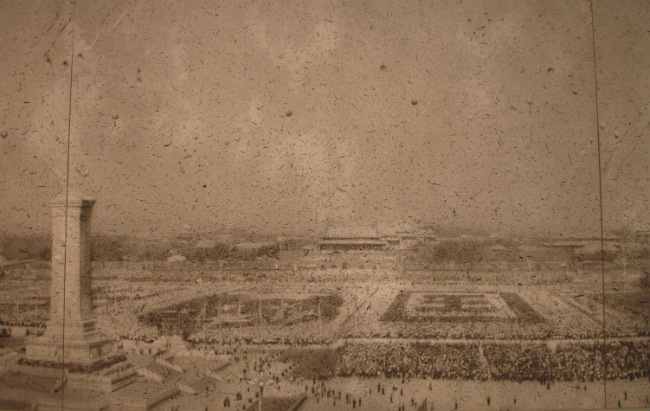 Previous Article Interview with Alan Furst, Author of the Newly Released “A Hero of France”
Next Article June Restaurant News in Paris