Interview with Alan Furst, Author of the Newly Released “A Hero of France” 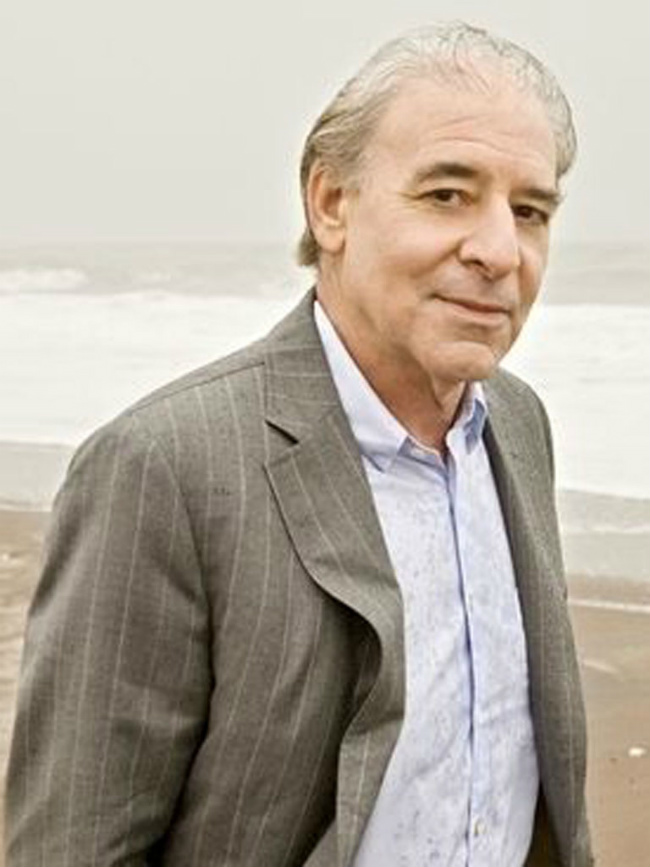 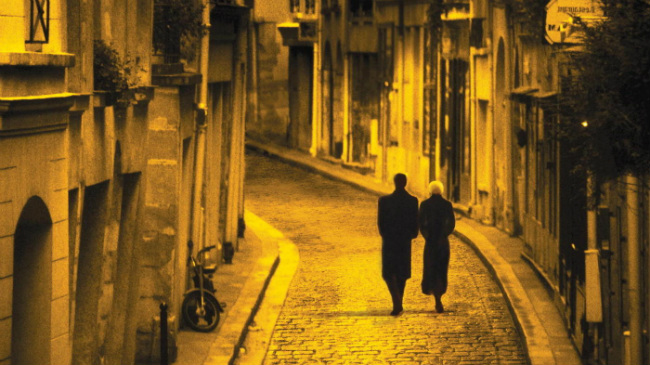 Alan Furst was born and raised in New York City, on the Upper West Side of Manhattan. After graduating from Oberlin College, he returned to New York, where for a time he “drove a taxi and wrote poetry,” before going to France on a Fulbright teaching fellowship at the University of Montpellier. On his return to the U.S. he lived for a while on the West Coast, where he wrote advertising copy and also began to write for Esquire and other magazines. In 1987 he and his wife moved to Paris, where they lived for six years. During this period he wrote a column for the International Herald Tribune, and also wrote the first three novels in his critically acclaimed and enormously popular series of spy thrillers. The New York Times has called him “America’s preeminent spy novelist,” his books have been translated into 18 languages, and in 2011 he received the Peggy V. Helmerich Distinguished Author Award, a literary prize for a body of work. In May A Hero of France, the fourteenth novel in this series, was published. Just before leaving his home in Sag Harbor, New York for a U.S. book tour, he took the time to talk with Janet Hulstrand about the “intense and dynamic” period of history in which his novels are set; about his work as a novelist; and about Paris. 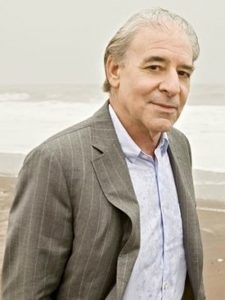 JH: Your series of novels are all set in Europe, in the years between 1933-1942. Why did you choose to focus on this time period?

AF: The time period is very intense. If you look at the politics of the period, Hitler rises to power in 1933. In 1934-35 you have the purges in the Soviet Union. In 1936 is the Spanish Civil War, which goes to 1938. In 1938 you have the real beginnings of the Holocaust. Life at that point was getting worse and worse for German Jews, and they were leaving. Also in 1938 is Munich, and the betrayal of Czechoslovakia. In 1939, it was the invasion of Poland, in 1940 the invasion of France, and in 1941 is the German invasion of the Soviet Union. But then the fortunes of the German army went bad in 1942, in Stalingrad. So that’s why I cover that time period. It was a very romantic, high romance period. People were very passionate, they may have been passionate about politics, but they were also passionate about each other, partly because it was as if “the world is coming to an end, so we’d better do whatever we’re going to do before that happens…” Look at the films that came out during this period. It’s an amazingly dynamic period of time…very different from the 1950s, from the 1920s. That’s why I like the period, because there are a lot of stories in all that action that are good for a novelist. 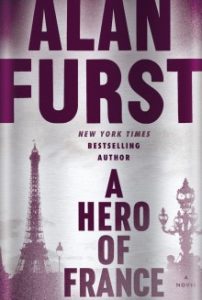 “A Hero of France” by Alan Furst

JH: Is there any particular reason you decided to cut it off before 1945? Because the war went until 1945…

AF: Yes, but the gestalt changed. By 1943, with the Germans on the run, people in Europe were feeling well, maybe now the point is just to survive this.

JH: Is it important to read the books in sequence?

AF: No, not at all. They’re not sequential.

JH: Okay, but having said that, is there any particular one that you think is a better starting point?

AF: I never know how to answer this. I will say that over time a lot of people have really liked Night Soldiers, which is the first book. But then there is also a book like Mission to Paris that feels good when readers read it. Who knows why? It felt good to write it, I don’t know where that came from. Certainly I didn’t plan it. It’s not something I could ever try to do, but it just so happened I had very good research for that book. 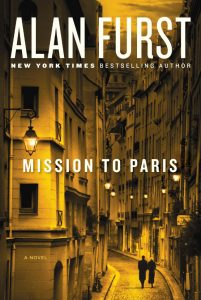 “Mission to Paris” by Alan Furst

It turns out that history of movies is very well written, there are some amazingly good books written about film, why that is I don’t know, but the people who are doing that work are very good at what they do. So there was a lot of good material there for me to work with.

JH: Would it be fair to say that Mission to Paris is one of your favorites?

AF: Well, it’s one of my favorites. People often say that The Polish Officer is the best book I ever wrote, and they might not be wrong. I wrote a particularly good book for all kinds of reasons I suppose. That was the last book I wrote in Paris, The Polish Officer. I wrote the first three books while I was living in Paris. Night Soldiers; Dark Star; and The Polish Officer. 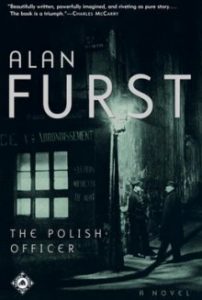 “The Polish Officer” by Alan Furst

JH: Did you have the idea for writing the books while you were living in Paris?

AF: No, I got the idea, I don’t really know when, it was over a period of time. It was when I started reading the history of that period. I wasn’t particularly reading it in order to write about it. I just thought, “Oh, this is so interesting, all these various spy services operating in Paris,” there were eight or nine of them. I wanted to read a panoramic spy novel about Paris in the 30s, so I went out looking for one, and there wasn’t one. So I thought, “Ok, fine, I’ll write it…” And the result was Night Soldiers.

JH: What made you decide to go back to the U.S.? And was it hard to leave Paris?

AF: It wasn’t hard to do, exactly. There were several reasons for it, but a lot of it had to do with the fact that I felt it would be better for me to be near New York City. I had thought you could just sort of write books and mail them in, but at that point in my career that didn’t turn out to be true. It would be true now, but even now it’s a good thing that I can go in to Random House, talk to people, this and that… 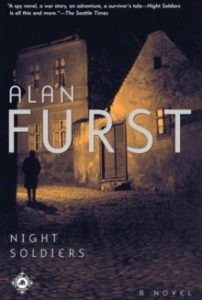 JH: What do you miss about Paris?

AF: (Laughs). My God. What don’t I miss? First of all, I really like the French. I really am a Francophile in every possible sort of way. They’re just different. They are their own way, not that they’re all good, or anything like that, but there are certain things about them…they’re very smart, and they place a high value on looking good, so that it’s nice to walk down a street in Paris, just to look at the people, who are looking at you. It’s the life of the café terrasse, really. I like that about Paris. It’s a lively city. I don’t know how else to put it. It’s also very beautiful, everyone knows that, and the French go to great lengths to keep it that way. And I’m not just talking about Notre Dame, I’m talking about just the streets, there are incredibly beautiful streets in Paris. And the arrondissements, the neighborhoods, are very different, one from another. This is all in A Hero of France, I’ve made much of that… of what the 9th is like, or the 6th… That’s how I understand the city, and that was another thing I really liked about Paris. When we lived there we lived in a hotel particulier on the rue du Parc Royale, which is just a beautiful place to live. And on Sunday mornings we would walk to the Jardin du Luxembourg, where we would have lunch in that café that looks directly at the gardens…the Rostand… 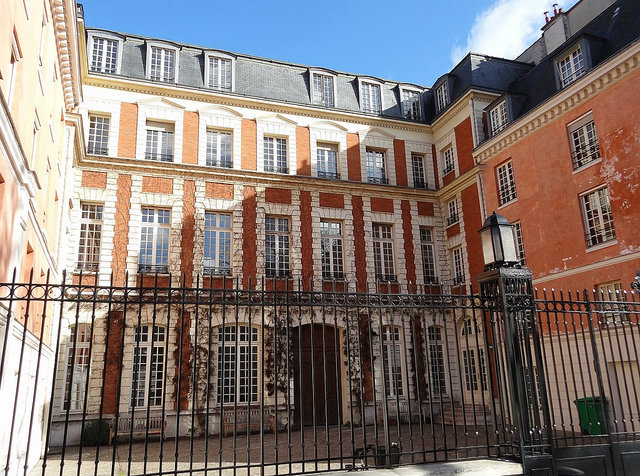 JH: Your appreciation of the French is really present in a very interesting way in your books. It’s one of the things I like about using your books in class with my students; I’m trying to expose them to good literature, and teach them something about history, but also help them to understand the French… 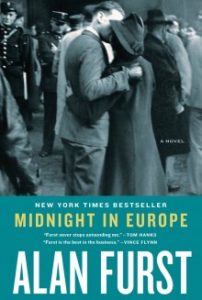 “Midnight in Europe” by Alan Furst

JH: I read an interview with you that you gave in 2004, and I was struck by something you said. You were quoted as saying “Whether you like it or not, Paris is the beating heart of Western civilization. It’s where it all began and ended.” There is a rather ominous note buried in this statement: can you explain what you meant by this? When did it end?

AF: (Laughs) It hasn’t ended. It does sound like something I might have said, but I think it was just something I felt that day about Paris. Paris has changed in some ways, but it still is sort of the beating heart of Western civilization… Why? I don’t know… I don’t think there’s really an answer to that question. It just is.