The Centennial of the Death of Marcel Proust 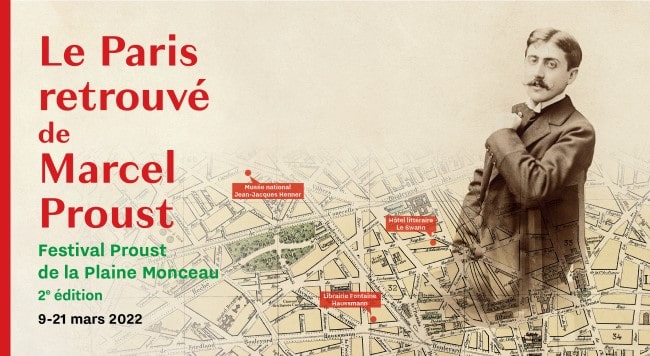 “I had always, within reach, a plan of Paris, which, because I could see drawn on it the street in which M. and Mme Swann lived, seemed to me to contain a secret treasure.” — Marcel Proust, “Swann’s Way”

The upcoming festival “The Paris of Marcel Proust” invites aficionados to travel to the Belle Epoque universe of the writer.

“Proust had conventional Parisian haute-bourgeois tastes of the time, from dinner in the Ritz garden to sexual frolics in the Right Bank brothels. He wanted the Prix Goncourt (got it), the Légion d’Honneur (got it), and membership in the Académie Française (couldn’t get it). Along with everything else he did that was more academically respectable, he offered a picture of a particularly beautiful place and period in the world’s history,” writes Adam Gopnik in the New Yorker.

So, will Proust change your life? Find out at Le Paris Retrouvé de Marcel Proust Festival, a joyful tribute to the author marking the centennial of his death. (He was born July 10th, 1871 and died November 18th, 1922 – laid to rest at Père-Lachaise Cemetery).

“No sooner had the warm liquid mixed with the crumbs touched my palate than a shudder ran through me and I stopped, intent upon the extraordinary thing that was happening to me.” — Swann’s Way.

“We all want to pay homage to the author of La Recherche and bring a slice of rediscovered time to life for visitors,” explains Colombe Charrier, Head of Project.

The Jean-Jacques Henner Museum  is an astonishing, “secret” museum located in a handsome, 19th-century mansion in the 17th arrondissement; it’s also one of the only privately owned houses open to the public in Paris. With this festival, the museum pays homage to Proust and the artistic life and salons of the Belle-Époque. Expect concerts, balls, walks, costume parties and encounters evoking the life and times of the dandy, socialite, gourmet and musician that was Proust. “We’ve also discovered original and renewed approaches to the writer,” says Colombe Charrier.

The Hôtel Littéraire Le Swann’s conferences and seminars will feature prestigious speakers to talk about their books and favorite Proustian themes, such as Jérôme Bastianelli, music critic and President of the Societé des Amis Marcel Proust, Proust expert Antoine Compagnon, writer Laure Hillerin, and Anne-Laure Sol, the curator of the Proust exhibit at the Carnavalet museum.

Jean-Yves Tadié, the writer, biographer, and academic noted for his work on Proust, will talk under the gaze of an exhibition of the fabulous original boards of “The Adaptation of La Recherche,” a beautifully illustrated comic book by Stéphane Heuet.

At 50 rue Laborde, 8th The Fontaine Haussmann bookshop, frequented by Proust and his governess Céleste Albaret, pay tribute via a walk and exhibition “Memories of Céleste Albaret”.

Continue your own search of Marcel Proust in Paris on thematic walks and admire the exhibition called “Proust, a Parisian Novel” at the Musée Carnavalet, the museum situated in the Marais district that’s dedicated to the history of Paris.

Take tea (from €68-€103 per person) at The Ritz, Paris in the Salon Marcel Proust.
The author was at the hotel’s inauguration in 1898 and made the Ritz his second home. Enjoy Florentines, chocolate cake, meringues, almond tarts, and of course, the iconic madeleines deliciously crafted by François Perret, The Ritz, Paris Executive Pastry Chef.

Previous Article A Case of the Blues: The French Flag Shows its True Colors
Next Article Letter from Paris: March 2, 2022 News Digest