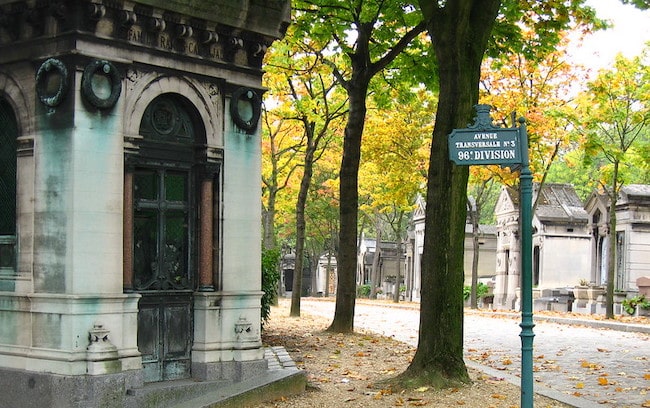 Flâner: to stroll. Surely that most Parisian of pleasures? Of course there are days to ‘do’ the Louvre – well, a gallery or two, anyway – or to stride with purpose up Montmartre or along one of the city’s newish riverside walkways. But flâner, that’s more of a wander, in expectation of not much, for as long as it takes, to wherever fancy should lead. It’s “how to feel French” for no cost and much gain. And it’s the way to fall in love with Paris all over again.

So, where to start? I let Balzac be my guide. “I rarely go out,” wrote the prolific, famously caffeine-fueled-and-stuck-indoors novelist in the 19th century, “but when I do wander, I go to cheer myself up in Père-Lachaise.” A cemetery is a curious choice of mood-enhancer, you may think, but this one is the world’s most visited and as you step through the main gates on the corner of Boulevard de Ménilmontant and the– fittingly-named–Rue du Repos, you will soon feel drawn in. Which pathway to follow into the 40+ hectares of tombs? Should you take a map at the entrance, or just wander? How old are those towering and beautiful trees?

Originally the burial ground of Father François d’Aix de La Chaise, confessor to Louis XIV, the site was developed in 1804 as the city’s first “garden cemetery, “laid out among beeches, cedars, spreading sycamores and lime trees, some of which date back centuries and give a magnificent somber unity to the grounds. So, somehow, does the jumble of tombs, chapels, cenotaphs and mausoleums. Each placed in memory of a unique individual, the soft greys–whether faded, moss-covered or disturbingly new– work as a whole to form the last resting place of over a million people. A Star of David here, a little Arabic script there, hint at diversity, but the common factor is starkly present: They are all dead.

Starting on a main path, then taking a couple of little detours as they present themselves, you will soon be surrounded by graves. Perhaps you will come across the grave of “Madame Lamboukas, dite Édith Piaf,” where someone will have left fresh flowers. Dying in 1963 after a distinctly colorful existence, Édith was denied the rite of burial by the Archbishop of Paris, but I hope she knew that over 100,000 mourners would come to mourn her passing. Maybe you will pass the tombs of Molière or La Fontaine, whose bodies were moved here in 1817, when the Parisian authorities, disappointed at the reluctance of their citizens to use this new cemetery, decided that the presence of a few famous corpses would popularize it. And so it proved. Tourist maps available at the entrance will point you towards over 100 of the most famous “inhabitants,” including many of the 19th century’s best-known writers, artists and musicians.

Perhaps the best strategy is to choose two or three “must-sees” and wander between them, open to happenstance. I found that well-chosen words on a famous tomb, fascinating though they were, were at least equalled in poignancy by the ever-changing array of  nymphs and cherubs, of  trinkets, balloons and little candles in glass jars, left at many more “ordinary” graves. The single red rose tucked at the side of Oscar Wilde’s tomb was certainly touching. But then I noticed the glass screen erected to protect the memorial from the lipstick scribbles of Oscar’s current admirers, which just seemed tacky. As did the pleading sign reminding would-be despoilers that the deceased’s family still regularly have to pay for the removal of unwanted graffiti.

Tranquillity is certainly to be found. People walk slowly, stopping thoughtfully here and there. One of the party notices something and points the others toward it. It seems only right to be reflective, to enjoy the peaceful surroundings. Yet the history books tell us of a dreadful scene of mass murder which played out in these very grounds in 1871, when one of the last struggles of the Paris communards was fought. A running battle ensued, as the city guards chased their federalist prey among the tombstones, killing many and lining the captured up against the wall of the cemetery to be shot. One hundred and forty seven bodies were dumped unceremoniously into a mass grave. The ‘Mur des Fédéres’, on the north-eastern corner of the cemetery, is still today a memorial, where you can see the bullet holes and remember the “Agonie de la Commune” commemorated here every year on its anniversary, the 28th May.

The Monument to the Victims of the Revolutions (Federated Wall), dating from 1909, by Moreau-Vauthier. Photo © LPLT, Wikimedia. (CC BY-SA 3.0)

It’s also a place to remember the horrors of World War Two, especially the fate of France’s Jews. There is a whole walkway of memorials to those deported to a dozen different concentration camps, the roll-call of horror citing Dachau and Sachsenhausen, Auschwitz and Bergen-Belsen, and in their midst, a heartrending sculpture of wire silhouette figures “à la mémoire des enfants juifs assassinés par les Nazis,” with their plaque reminding you that passing through the memory of onlookers is their “seul sépulture.”

History, you think, is full of such dreadful times. But what about today? Just a few steps away from the much-visited grave of Jim Morrison (whose grave bears a Greek inscription which translates as “true to his own spirit”), I noticed a much newer grave, with little vases of flowers, a few plastic mementoes and a photo of a beautiful young woman with long dark hair. “Suzon Garrigues, 21 ans, tuée au Bataclan vendredi 13 novembre 2015.” The French Literature student’s night out at the city’s Bataclan Concert Hall in the 11th district had ended in her death in a terrorist shooting. Eighty nine other music fans met the same fate. A reminder that horror and violence have not gone away.

And there too, the tomb shared by Abelard, the 12th century philosopher and Héloïse, the girl he tutored, then fell passionately in love with. Despite a cruel separation at the hands of her uncle, their story speaks to us down the centuries of the power of love.  Their two sculptured figures are reunited on a tomb, even though they lived apart in life. Maybe that’s romantic, maybe it’s just a cruel irony? A little wandering, a lot of thinking. That’s the essence of flâner. I’ll potter on …..

Previous Article Peasant Pleasantry: The Urban Shepherds on the Fringe
Next Article Words of Advice from the Expat Whisperer