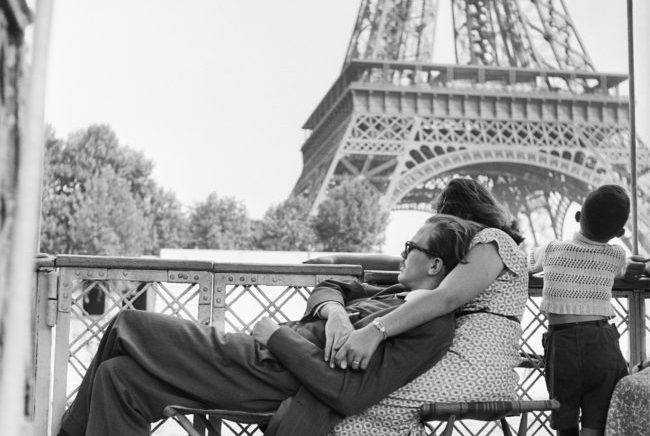 You’re no doubt familiar with Robert Doisneau, the celebrated photographer of the 1930s, most famous for that iconic image ‘Le baiser de l’Hôtel de Ville’ (also known as ‘The Kiss’), a young couple stealing a moment of amour on a busy Paris street. But do you know Willy Ronis?

If you don’t, now is the time to fix that situation. Perched high atop the hill of rue Ménilmontant at the Pavillon Carré de Baudoin is a retrospective of the work of a Paris street photographer who made images as touching, atmospheric and full of life as Doisneau’s, although he’s less renowned. You’ll come out of the exhibition wondering why. 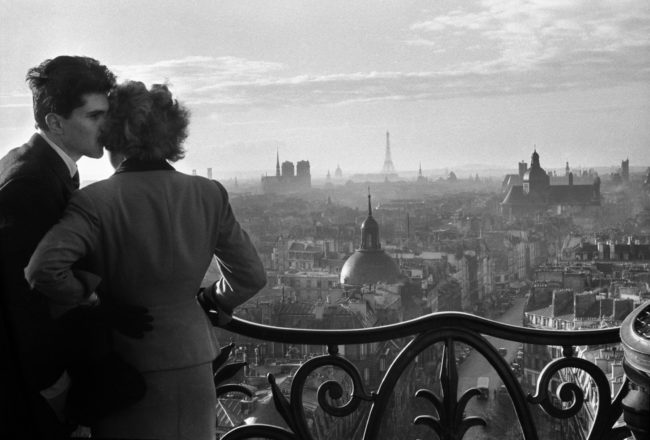 If what’s required is an iconic romantic photo, he ticked that box. In ‘Les amoureux de la Bastille’, taken in 1957, a couple stand with their backs to us at the iron balcony atop the Juliette monument, the city spread out before them. The man turns his head to whisper something into the ear of his lover, as a low dusk light falls across the rooftops, the view sweeping west past Notre-Dame Cathedral to the Eiffel Tower on the horizon. Young love, Paris, and not one but two famous landmarks. What more could one want?

Ronis was a humanist photographer, capturing the daily lives of ordinary people with warmth and compassion, often with humor. Each image opens a door to imagination, empathy, understanding – recognizing and respecting the humanity of the subjects increases our humanity. He portrayed the dignity and honor of working class métiers, and his images of the strikes and demonstrations of the 1930s are an evocation of turbulent times. In one arresting image, a small girl in a Phrygian bonnet sits on her father’s shoulders, raising a small fist and looking at the camera with a mix of pride and puzzlement, a moment of pure, poignant humanity in the midst of a mass movement. 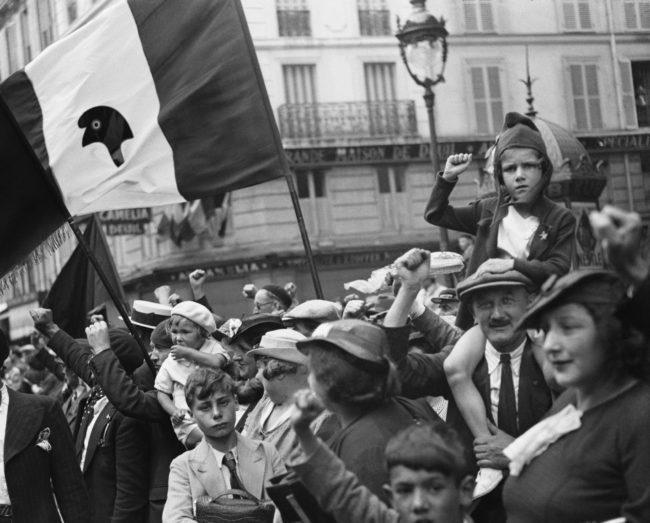 His mission was not to romanticize, but for the modern viewer, the evocation of 1930s to 70s Paris with its vintage cars, bereted citizens and lost métiers (streetlamp cleaners, street knife sharpeners and canneurs de chaises) creates a kind of nostalgic longing for a time and place long gone, whose setting is unmistakably the Paris of today.

The sense of a society on the verge of tipping into modernity gives these images emotional heft today. The reason this exhibition is up here on the hill is ‘Belleville-Ménilmontant’, a collection of photographs Ronis took in the 1940s after being introduced to the area by a painter friend. Its carless streets are hardly recognizable as Paris. With its vacant lots, dilapidated houses and cobblestoned country lanes, this working class area (now rapidly gentrifying) was then in the grip of transition – from traditional to modern, from village to city. Its picturesque shabbiness and lively streets and bistros were fascinating to the artist – as was the “incomparable light of the hilly quartiers. And that, no one can ever demolish.” 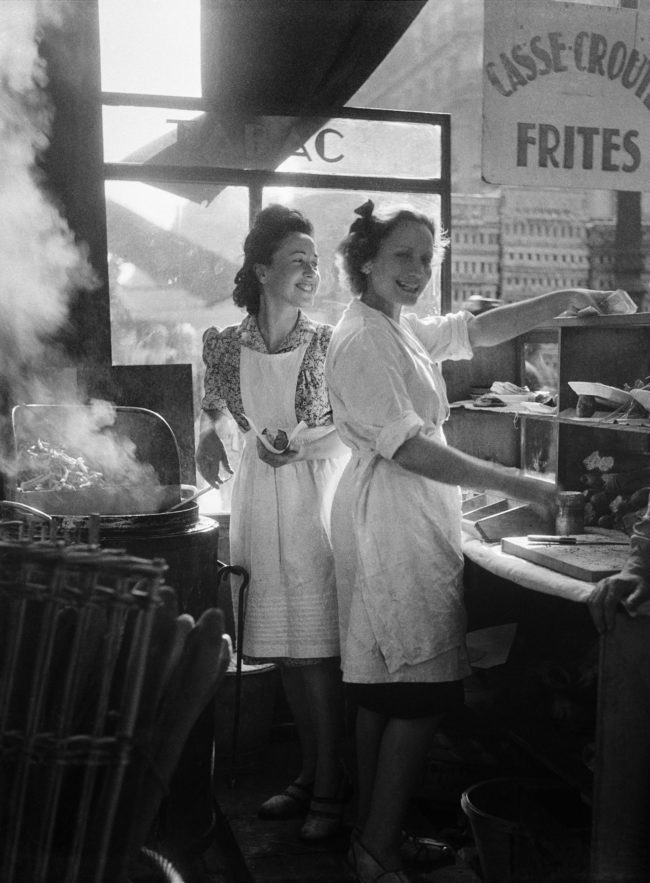 A horse pulls a cart down avenue Simon-Bolivar past a workman on a ladder fixing the traffic lights, pétanque players gather under a shady tree on a hill not far from Place des Fêtes (where, Ronis tells us, today stand highrises). A gate opens from rue de Belleville onto an open-air garden where people lunch under a tree with branches festooned with lights – a countryside guinguette in the 20th arrondissement.

The shock of the unfamiliarly familiar is an added enjoyment if you know this area, although that goes for Paris as a whole as Ronis’ lens wanders the city: smartly dressed commuters exit the metro at calm and sparsely peopled Barbès-Rochechouart; rue de la Huchette is a hip hotspot for lindy hoppers and young bohemians; young men frolic in a fountain on a grassy Place de la République. This is Paris but not as we know it, its gorgeously complex individual stories conjured by the perfect fleeting moments captured by this master storyteller. 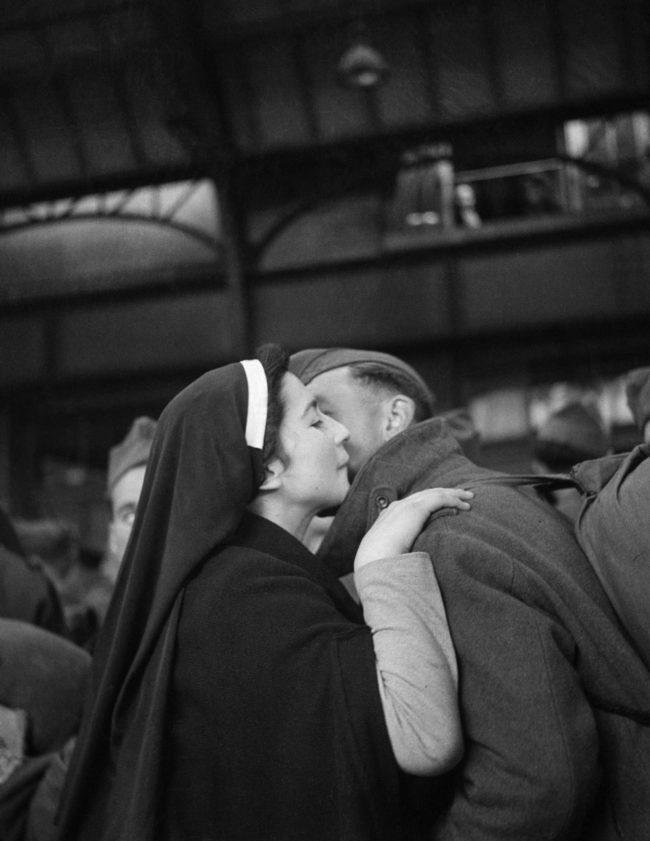 Previous Article Bizarre Bathtub Tales from Paris
Next Article Artcurial Auctions the Eiffel Tower! Get a Piece of the Iron Lady

Janine is an Australian-born freelance writer based in Paris. She’s passionate about French language and culture but if she’s really honest, she’s here mostly for the rillettes de canard, fromage de brebis and Pouilly-Fume. She also writes about Paris and France for lonelyplanet.com.