The Bonjour Paris editorial team recently requested reader submissions with memories from first trips to Paris. We were overwhelmed with wonderful responses, which we are publishing in a special series. (Read other installments here.) Below, writer Cathy Fiorello remembers how a travel mishap first brought her to Paris- and inspired a life-long love of the city.

I went to France the first time because I couldn’t get into Italy. The Italian tour I wanted was booked and my travel agent offered France as a consolation. This turned out to be one of the happiest mishaps of my life. After two weeks of glorious drives through Normandy, Brittany, and the Loire Valley, we made the final push into Paris where, after three days, the tour would end. My husband, who had studied art in Paris a lifetime ago, knew just where to lead me in the brief time we were there. We checked into our Right Bank hotel, crossed the boulevard to the Louvre Museum, and paid our respects to the Grandes Dames of Paris art. We looked in on the Mona Lisa, sprinted from the Winged Victory to Venus de Milo and Diana the Huntress; then circled the Three Graces. On the way to the exit, we passed some Raphaels and a Titian or two.

“Now I want you to see the real Paris,” he said as we walked out of the museum into a steady drizzle. We crossed the nearby Pont Royal to the Left Bank, wandering through its narrow streets without a map, without a plan, without an umbrella – soaking up the rain and the delights we encountered at every turn.

The next day was crammed with bus tours. You can’t see Paris from the windows of a bus; it’s a walking city. I longed to be on foot, free to linger at places I had only read about. On our walk through the Left Bank the day before I had breathed in the essence of Paris and had yet to breathe it out when we boarded the plane for home. My personal travel compass was fixed in “return” position. I knew I would be back.

I have friends whose goal it is to see the whole world. They keep a list, crossing off where they’ve been and checking where they’ll go next. They wonder why I keep going back to Paris. They don’t understand that, for me, Paris is not about seeing, it’s about being. This is where I want to be. John Baxter, an Australian ex-pat living in Paris, says, “The love of a city, like the love of a person, often begins in the first instant of encounter.” That’s what happened to me the first time I walked across Pont Royal to the Left Bank. I never knew something had been missing from my life until I got to Paris.

More than twenty years have passed since I first saw Paris and I’ve yet to become blasé about the city; it never fails to enchant me. The crowds that accompany the tourist season, the scaffolding covering a favorite monument, the ubiquitous strike or two— nothing detracts from my joy in being back. I’m an unabashed romantic when it comes to the City of Light. As I walk the cobbled alleys and explore the Left Bank shops, I imagine the impoverished authors, now revered, who slept on cots at the Shakespeare & Company bookstore while they were learning their craft. I see a young Hemingway at La Closerie des Lilas creating characters that are now literary legends. I smile when I come to the bouquinistes on the banks of the Seine and see that the “authentic” first printing copy of The Little Prince is still there. I don’t look for the new, the “in” attractions of the current tourist season. I need to touch bases with the old, to be reassured that the Paris I hold dear hasn’t changed.

We had that trip to Italy that we were booked out of the previous year. Being of Italian descent, there were many nostalgic moments. The kind, eager-to-please people brought back memories of the relatives still steeped in Old-World customs who were so much a part of my childhood. Even the food was reminiscent of what I had eaten at their tables. The landscape was captivating—is there a city more magical than the floating mirage of Venice? That’s where I should have lost my heart. But it was too late; I had left it in Paris.

This memory was taken from Cathy Fiorello’s fascinating book Al Capone Had a Lovely Mother. 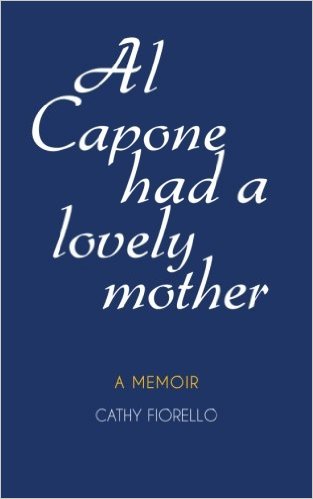 Cathy lives in San Francisco, CA. Her passions are food, Paris, and writing. A morning at a farmer’s market is her idea of excitement. Visiting Paris is her idea of heaven. And much of her writing is about food and Paris. She worked in book and magazine publishing in New York before she moved to San Francisco. She has two children, one on each coast, and four grandchildren, two on each coast. Her mission is to make foodies and Francophiles of them all.